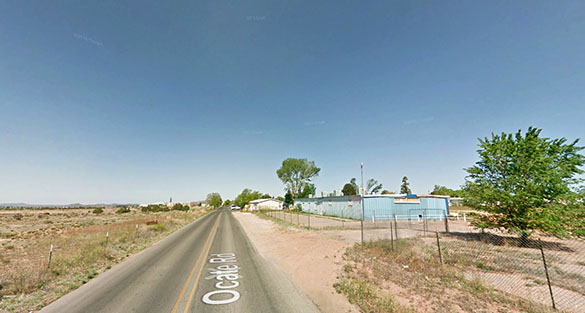 A New Mexico witness at Santa Fe recalled a UFO encounter from the late sixties when a disc-shaped object hovered under six feet off the ground near his family’s mobile home park, according to testimony in Case 81404 from the Mutual UFO Network (MUFON) witness reporting database. 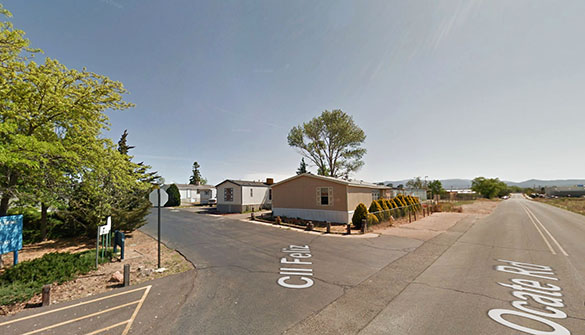 The witness believes it was late 1966 or early 1967 when the incident occurred.

“The weather was cold, but no snow,” the witness stated.“I lived with my Mom and Dad. Dad was overseas. I lived outside the city limits of Santa Fe in a mobile home park with my mom.”

The witnesses’ Mom decided to go to the drive-in theater which was about half a mile west of the trailer park on the road to Albuquerque.

“We saw the movie and left to go home, late at night, yet a lot of traffic was going both ways. Mom got into the left turning lane to enter the park and had to wait for a lane to be clear. I was sitting directly behind her and was looking at the tree line alongside the mobile home park where the six-foot cyclone fence was. Then I spotted it.”

With all of the traffic surrounding him, the witness rolled his window down to get a good look at the object. 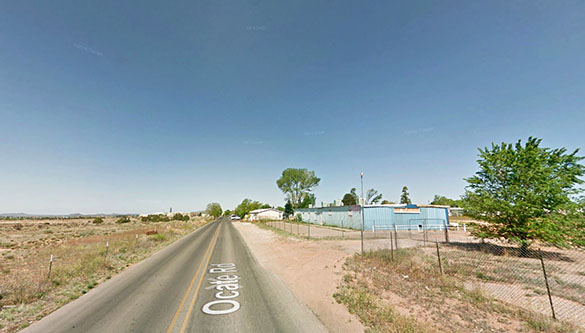 The object was between 18 and 24 feet long. Pictured: Santa Fe, NM. (Credit: Google)

“Just about 100 feet away I saw a hovering saucer in the shadow of the pine trees that were along the fence line on the west side of property. The reflection of the object could be seen from the road. It was a bright moon so through the trees light was hitting the craft. The pine trees were casting a shadow and it was in it hovering above the ground, but I could still see it because the moon lit up the field behind it.”

The witness was able to see a dark looking hovering craft.

“It had an arm of some sort pointing and extending to the back of the trailer, but not touching it. There was no sound coming from it at all. It was 18 to 24-feet-wide. It hovered four to six feet off the ground and I saw blasts of blue-red-orange-yellow short flames coming from ports around the mid-section of it.”

The witness described the ports.

“These ports were evenly spaced around the furthest section, a little lower of its mid-section. Round and about six to eight inches in size. The flames came out from left to right and seemed to go around the craft because there were bright flashes of light continuing as long as I could see it on the ground on the other side. It wasn’t light. It was flames. Because the next time I saw the same ports facing me, the fire was a little different each time. I saw it was a hole where the flames came out of each time.”

“I played in this area all the time. It was an empty field with 3-foot-tall dry grass. Directly under the craft the grass was moving violently back and forth, but outside the craft the tall grass wasn’t moving at all. I could make out small lines that went around one side and met up with the other. This was a saucer-like object, thicker on the bottom and with some sort of dome on the top.”

The witness was very disturbed by what he was seeing. 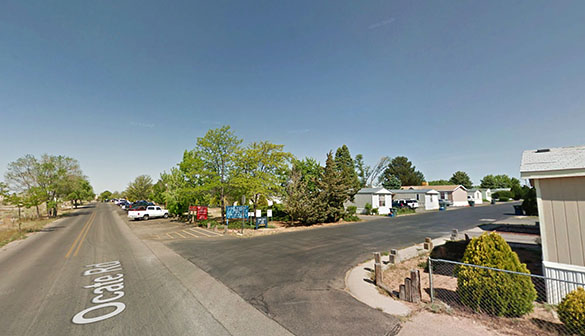 The witness described ports around the object that were round. Pictured: Santa Fe, NM. (Credit: Google)

“It may have been great to finally see one, but I was only 11 years old. My mom didn’t know what it was, but she saw it. Saw the lights, saw the grass moving and it hovering above the ground. We spoke about it a couple of times, but she ended the conversation as soon as I started it. My father finally returned from overseas and I couldn’t talk about it again until the day he opened the newspaper to the “Living” section of The New Mexican newspaper and there was a picture of a UFO going over a farmer’s barn in the Santa Fe area that a farmer took and turned over to the paper. It was the same UFO that I saw, exactly, but taken during daylight hours.”

The witness told his father that this is what he saw and the photo was proof.

“I clipped it out of the paper and saved it in my mother’s scrap book, but it too has disappeared as well the paper. I never ever forgot and now that I’m 62 years old, I thought it time to tell my story of what we saw. My family has died and all I have is this memory of what was seen that night. I have a drawing, but it’s difficult to figure out how to send it even though I have a B.A. degree in social science. Get back with me if there’s more you can find out what I saw. I appreciate it.”

New Mexico MUFON Assistant State Director John Fegel investigated and closed this case as an Unknown. Please remember that most UFO sightings can be explained as something natural or man-made. The above quotes were edited for clarity. Please report UFO activity to MUFON.com.