A purported UFO video captured over Russia recently was picked up by UK media. However, the video is actually a repost of an alleged UFO video posted in 2013. Either way, the phenomenon displayed in the video still goes unexplained, and the anomalous lights in the video have supposedly been recorded  several times.

The Mirror Online was the first to cover the story on May 22, 2015. They referenced a video posted on a French UFO YouTube channel called Ovni & Extraterrestre. The title of the video reads: ” Observation d’OVNI, UFO en Russie [2015].” OVNI is the term for UFO in Spanish and French speaking countries.

Another news website, the Daily Express, then picked up on the story a few days later.

According to the Mirror Online, “information submitted alongside the YouTube video, the UFO was seen in Russia’s Astrakhan region.”

The video they reference only has a short description, which translated by Google Translate reads, ” Hi everyone, here’s a video of UFO sighting in the skies of Russia.”

However, the same video, posted in April, 2013, does state that the video was recorded in the Astrakhan region of Russia. This video claims the footage was captured on April 24, 2013.

The previous year, in 2012, several witnesses recorded similar UFOs over St. Petersburg in Russia. The following video is purportedly from April 12, 2012.

So what is being seen in the videos?

All the videos are similar, showing bright lights in a cluster hanging in the air for several minutes. 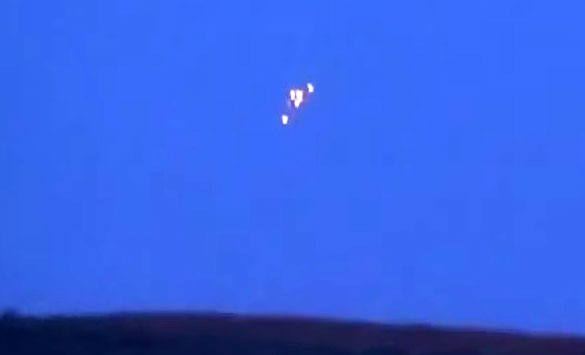 The Mirror Online highlighted the comments of one YouTuber: “I think this could be the real deal…a number of reports of UFO sightings and personal witness reports link back to what is pictured here.”

Another excited comment, posted verbatim, reads: “…I swear on everything I love that a minivan sized ball like these flew thirty feet over me on cape cod Massachusetts it was flying at least as fast as a propeller plane and it was silent as the wind. It looked alive actually and when it got above my house it banged a super sharp right and when it got halfway up the course it disappeared. That was July 3 2012 been searching ever since. This has to be the first real video ever on YouTube.”

However, others are not convinced. Some claim the lights are Chinese Lanterns, and others are adamant that the lights in the video are military flares.

Here are some videos of military flares and Chinese Lanterns that we have captured for reference.

At least one YouTuber has suggested they are “Satans fallen Angels [sic],” and are here in preparation for the coming of the Antichrist.

No one has claimed to know the exact source of the lights, so until they do, the mystery continues.