Home / Articles / Review: The Truth is Out There
From the new documentary, The Truth is Out There, this writer learned that fluoridated water causes a substantial IQ drop, that the United States is nearly alone in the world operating on 120v/60hz electrical current due to a sweetheart deal with the copper industry, and that actor Eric Roberts witnessed the controlled demolition of WTC Building 7.

Review: The Truth is Out There 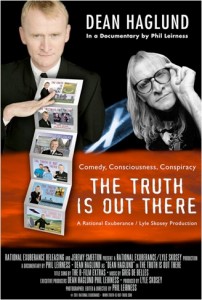 The Truth is Out There movie poster (credit: Rational Exuberance)

Any film which enlightens the viewer is a good thing. From the new documentary, The Truth is Out There, this writer learned that fluoridated water causes a substantial IQ drop, that the United States is nearly alone in the world operating on 120v/60hz electrical current due to a sweetheart deal with the copper industry, and that actor Eric Roberts witnessed the controlled demolition of WTC Building 7.

Seemingly far-flung facts, perhaps, but not to actor/inventor Dean Haglund. Best known for his portrayal of Langly, one of the three Lone Gunmen who graced the X Files, is affable and inquisitive as cameras capture his 15-month quest to uncover the truth. Examining “what it’s like to live life so closely identified with a role [linked with] conspiracy culture,” the truth reveals itself in pieces, as this cinematic sampler finds Haglund first flitting from sci-fi fan conventions and UFO conferences—interviewing a string of folks either touched by angels and extraterrestrials or making a business of investigating them. Intercut with Haglund’s visit to psychotherapist Dr. Nicki Monti, are his interviews with Pete Davenport of the National UFO Reporting Service, David Sereda, the ubiquitous Richard Dolan (“How has the government hidden [UFOs] for 60 years? Through media, academic and political manipulation”), and Bob Dean, who opines, “The reason we have freedom of speech is because nobody knows anything.”

Somewhat abruptly, the film’s focus shifts from flying saucers to more serious business. Retired surgeon, radio host and health crusader Dr. Stan Montieth talks food conspiracies and the elites’ desire to sterilize most of humanity; former Stanford physicist Dr. William A. Tiller philosophizes on science and compassion; Mark Bennett discusses underground therapies and the producers of the play Reinventing Tesla champion the brilliant scientist—“The most famous person in 1900”—and his quest to bring wireless free energy to the planet. The Troggs’ Reg Presley, who is known for sinking the profits of “Wild Thing” into crop circle research, discusses the enigmatic formations and Jordan Maxwell, leading authority on occult and Biblical symbolism, who, although noting that we “live in the most despotic police state ever,” echoes earlier sentiments that there is a higher intellectual and spiritual force” which pervades humanity and life in general.

The helter-skelter interviews won’t rattle the film’s intended audience, and plenty of humor softens the tone (radio host Alex Jones whips himself into a trademark frenzy before cutting to commercial, as guest Haglund looks on). With a running time of almost two and a half hours, it is a stimulating if long and bumpy ride. While the conspiracy novice may find it somewhat muddled, this writer predicts The Truth is Out There will develop a cult following, circulating ala Zeitgeist.

DVD, and Collectors Editon DVD and BluRay (which feature 80 minutes of bonus material can be ordered here: The Truth is Out There

Having witnessed her first UFO alongside Air Force personnel as a child, Skylaire began her writing career at age 17 with "File o' the Damned," a column of Fortean investigation for Fizz Magazine. Translated into over 20 languages and plastered helter-skelter online, her gonzo reportage has appeared in countless magazines, books and journals. She is the founder of the League of Western Fortean Intermediatists, or L.O.W.F.I. (www.forteanswest.com), a research-based band of urbane explorers with interests in all shades of the paranormal. 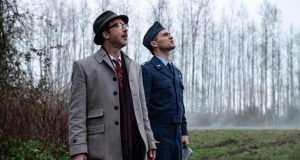 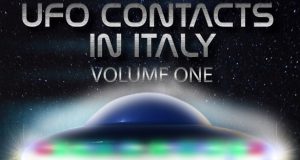