It was last Friday that I learned that Lou Farish had passed away on January 26. It was not a surprise since I knew that Lou’s health was deteriorating rapidly and he was at a care center in Arkansas. Let’s reproduce first the announcement of Lou’s death by his close friend Jerry Blackburn, posted originally in UFO Updates and then copied elsewhere: 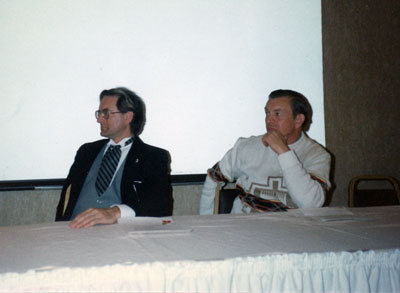 Lou Farish (right) with the mayor of Eureka Springs, at the opening of either the 1st or 2nd Ozark UFO Conference in 1989 or 1990. (Credit: Antonio Huneeus)

I’m sorry to have to tell you that Lou died of cancer this afternoon at 4:55 PM CST in Morrilton, Arkansas at the River Chase Rehabilitation and Care Center where he had been under hospice care since early September. He died peacefully, was not in pain, and was surrounded by a small group of friends. A memorial service is tentatively planned for 2:00 PM on Saturday, February 4, at the Harris Funeral Home in Morrilton, AR. Confirmation of the date and time will be in an obituary to be posted in a day or two on the Harris Funeral Home website at www.harrisfuneralhomes.net. If I can provide additional information, please let me know.

If you cannot attend Lou’s memorial service, but would like to send me a short statement to be read at the service about how you knew and/or will remember Lou, I will be glad to do that for you. We may also include these statements in a program to remember Lou this April at the Ozark UFO Conference in Eureka Springs. Also, if you have any favorite photos of Lou that we can use in the service, I would appreciate it if you would scan or photograph them and send them to me, and especially any early photos from the 70s and 80s.

Since Lou did not have a wife, children or siblings, he left his estate, including 80 acres of land, to a trust to be used to encourage UFO research and education through awards, fellowships and mini-grants over the next several years.

Lou was one of the most interesting people I ever met, and like many of you, I thought of him as one of my best friends. He was one of a kind, and will be greatly missed, both as a person and for his many contributions to ufology. His circle of friends goes far beyond the e-mail list I’m sending this message to. If you have email addresses for others who knew and cared about Lou, please forward this message on to them. 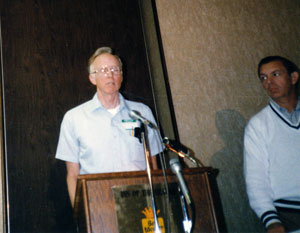 Lou Farish (right) with Prof. James Deardorff at the podium in one of the early Ozark UFO Conferences in the early 1990s. (Credit: Antonio Huneeus)

A great and humble ufologist

Everyone would agree that Lucius Farish was one of the great American ufologists and yet he never published a book, stopped writing articles years ago, never lectured and almost never appeared on TV. So, how did people know about him and his work? Lou was a humble researcher that never promoted himself or his ideas. He lived for years in Plummerville, Arkansas, working for the U.S. Post Office and cultivating ufology on the side. He joined APRO, MUFON and other UFO and Fortean organizations in his youth, publishing articles for various magazines and newsletters in the sixties and seventies. Lou developed an interest in historical UFO research and wrote some articles about this topic with Jerry Clarke. Then sometime around the mid-seventies, Lou began compiling his monthly UFO Newsclipping Service, a 20-page digest on legal size with reproductions of local newspaper articles throughout the USA on sightings, events, etc. It had an international section (mostly UK and other English speaking press) and a “Forteana News” section on the last four pages for the latest about Bigfoot, Loch Ness, Atlantis, monuments in Mars, remote viewing, etc. 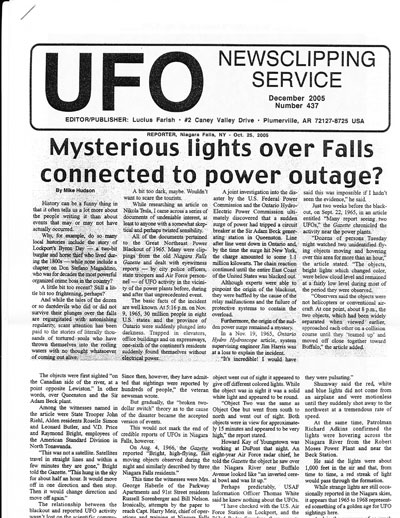 It’s hard to fathom the importance for something like the UFO Newsclipping Service back in the old days when people didn’t have the web and all the new social media. Nowadays any UFO story anywhere in the world can be found instantly, but not back then when it took the dedication of someone like Lou to put together the pieces of what the print media was saying about UFOs. Then in the late eighties Lou found his second highly successful niche in American ufology. In the Spring of 1988, an Arkansas researcher called Bill Pitts organized a conference in Eureka Springs, a picturesque spot in the Ozarks, to launch what was supposed to be a New Project Blue Book. It was a historical event in that some of the people involved in the old air force project did attend and talk. (See my interview with Major Dewey Fournet on this site.)

Pitts’ New Blue Book didn’t prosper but Lou Farish, who was helping the conference with local MUFON people, saw the advantages of both the picturesque location of Eureka Springs and the need for a UFO Conference that could service the Midwestern and some southern states. Thus was born in 1989 the Ozark UFO Conference, held annually in Eureka Springs, Arkansas, in April, which in a short time became one of the largest and most important American UFO events. In the early days it was also supported by MUFON, and counted with the appearance of many seasoned researchers like Linda Moulton Howe, Timothy Good, Dr. John Mack, George Knapp, Wendelle Stevens, and many others, including myself who attended many times in the 90s and will speak again later this year. I had the privilege of assisting Lou in a couple of things, including helping to bring a speaker (Sergei Bultantsev) from what was still the old Soviet Union, and presenting the year later the Russian documentary Planet of Aliens by Vladimir Avinsky. 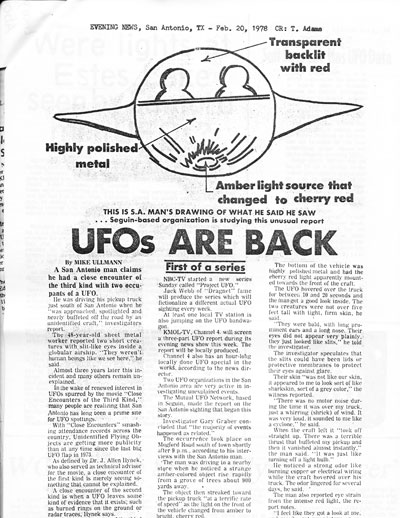 The Ozarks Conference continued to expand and Lou kept running it until the last couple of years when due to his health he turned over to the people who had worked with him. I have no doubt that Lou’s open and honest personality had much to do with the success of the Ozark’s Conference. Everyone liked Lou. It was obvious that you were dealing with someone who was both rational and passionate about the subject, who never engaged in self-promotion, fanatical ideas, personal attacks, and some of the other features that unfortunately accompany some of American ufology. He was unique, a great American ufologist who never published a book, gave lectures or appeared on TV, but whose contributions to the field via the Newsclipping Service and the Ozark Conference will be remembered for a long time. All those who knew Lou will miss him greatly.

You can check the 2012 program of the Ozark UFO Conference here.