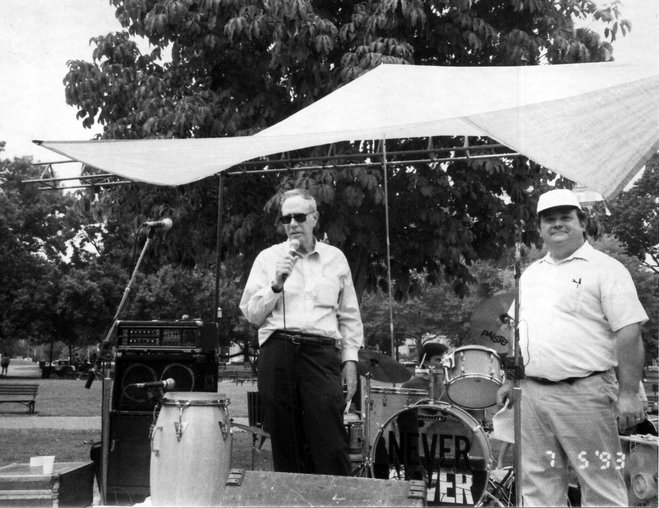 Moseley speaking at the Operation Right to Know rally in front of the White House at Lafayette Park in July 1993. Standing to his right is Hal McKenzie, one of ORK’s organizers. (Photo: A. Huneeus)

[Above photo: Moseley speaking at the Operation Right to Know rally in front of the White House at Lafayette Park in July 1993. Standing to his right is Hal McKenzie, one of ORK’s organizers. (Photo: A. Huneeus)] 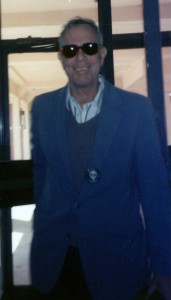 Jim Moseley the way he would want to be remembered: somewhat mysterious and somewhat funny. (Credit: Antonio Huneeus)

Just as I returned from a two-week trip to Chile I found the sad news that my old friend the “Supreme Commander” James W. Moseley, better known as Jim Moseley, had passed away from cancer on Friday November 16 in Key West, Florida, where he lived for the last few decades. Fortunately, I spoke on the phone with Jim right before my trip; he was still alert and interested in all sorts of ufological gossip, even as he was getting ready to go to the hospital for a complicated cancer surgery. I’ll write a more formal biographical profile of Jim in the next issue of Open Minds magazine, of which he was a fan, keeping this piece more personal and informal, which is the way Jim liked to do things, including his relentless but at the same time hilarious critique of American ufology and ufologists.

Jim Moseley was born in 1931, the third son of Major General George Van Horn Moseley, who was a prominent U.S. Army officer but also a notorious right wing and anti-Semitic figure during the FDR era. Jim didn’t get along with his father and so became a rebel, quitting Princeton University after a couple of years and pursuing a number of independent activities which included real estate deals, antiquarian pursuits in South America and of course ufology. Until the last few years when his age and health slowed him down, Jim was a permanent fixture at all major American UFO conferences. You could always find him at the bar drinking martinis and collecting gossip, which would then appear in his longstanding newsletter Saucer Smear. This was the only American UFO publication devoted not to UFO cases per se but to the discussion of the personalities of ufologists. It was technically “non-scheduled” and free, although Jim was glad to receive donations which he called “love offerings.” In the last few years it became his main intellectual activity since he always had a lot of fun editing it and making fun of people. 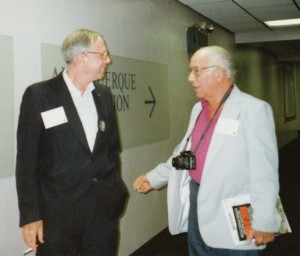 Jim Moseley having some fun with arch-debunker Philip Klass at the MUFON Symposium in Albuquerque, NM, in 1992. (Photo: A. Huneeus)

Many in the UFO community considered Moseley a skeptic because he was always reluctant to accept the validity of some of the more famous incidents like the Roswell crash, the abduction cases researched by Budd Hopkins and others, and the ET theory in general. But Jim was also equally skeptic and sarcastic of the debunkers, making fun of many of the explanations proposed by the late Philip Klass and maintaining a longstanding feud with the magician James the Amazing Randi. He could also keep a good friendship with some witnesses and researchers, even though he didn’t believe in their cases, as it happened with Ed Walters of the Gulf Breeze, Florida, UFO saga in the late eighties and early nineties. That’s why someone (I don’t remember who) called him once the Voltaire of ufology in the letter section of Saucer Smear. Like the famous 18th century wit, who used his pen to ridicule the Catholic Church, the French monarchy and everything else in the society of his time, Moseley was critical and sarcastic of just about everything and everybody in ufology. Yet Jim did believe a core of the UFO phenomenon was real and truly unexplained after filtering out all the hoaxes, conspiracy theories, misidentifications and just plain nonsense that pervades much of the field. Philosophically he was closer to Jacques Vallee and Col. John Alexander, about whom he expressed admiration in some of our last phone conversations. 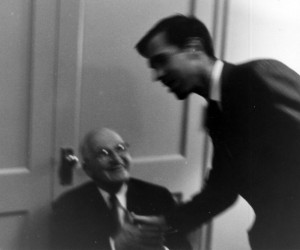 Moseley’s investigation of UFOs began in 1953, when he traveled throughout the USA trying to elucidate what was then the new mystery of flying saucers. He visited the Project Blue Book facilities at Wright-Patterson Air Force Base in Dayton, Ohio, meeting Col. Bob Friend. He attended the famous “Giant Rock” contactee convention and interviewed many witnesses, researchers and officials. He even met former President Harry Truman at his office in Independence, Missouri, and asked him about flying saucers. In what became one of Moseley’s favorite anecdotes, Truman responded, “I’ve never seen a purple cow, I never hope to see one.” This was the serious period of Moseley’s career, when he published Saucer News, which was a critical publication devoted to real cases and investigations and not just gossip.

One of Saucer News’ most famous issues was an exposé of the colorful contactee George Adamski, who was then at the peak of his fame. Later, Moseley produced a famous hoax with his compadre Gray Barker (an open promoter of ufology who was not shy of “inventing” cases when needed), the so-called “Straith letter” mailed to Adamski by an alleged official from the “Cultural Exchange Committee” of the U.S. Department of State, which confirmed and encouraged Adamski’s claims of contact with benign blondes from Venus and elsewhere in the solar system. Adamski was delighted and paraded the “Straith letter” as proof of his claims, which led to an FBI investigation. Only after Barker’s death in 1984, did Jim Moseley publish the full inside story of how he and Barker created the letter using real U.S. government stationary that Barker had obtained from a friend. 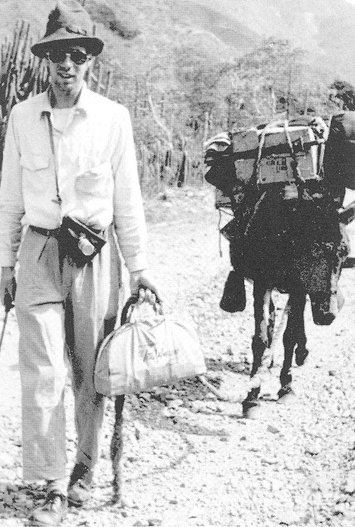 I don’t remember exactly the year I first met Jim Moseley, it must have been around 1978 or 1979, but I do recall the circumstances. It was at a party in the Manhattan apartment of his close friend Tim Beckley, the well known publisher of many paranormal and UFO-related books, whom I had met recently and who was publishing some of my early UFO articles. Jim and I struck a good friendship immediately, as he was very knowledgeable of the field and had a great sense of humor. We also had a common interest for all things South American, as one of Jim’s most cherished periods was the few years in the late fifties when he went back and forth to Peru and to a lesser extent Ecuador and northern Chile, purchasing and digging pre-Columbian antiquities. Moseley was unabashed about his grave-robbing activities, his adventurous days as a huaquero (from the Quechua word ‘huaco’ for pottery, found frequently in tombs) as they are called in the Andean countries.

One of Jim’s funniest anecdotes he told me personally many years ago is when the Peruvian Ambassador to the UN in that period came to dinner at Moseley’s apartment in Gutenberg, New Jersey (he owned the building back then). To avoid any possible legal problems in Peru (the black market antiquities trade is now enforced strictly in South America but back then was a different story) Jim gave the Ambassador a $2,000 bribe in cash inside a paper bag. When Moseley moved to Key West, Florida, sometime in the eighties he opened a pre-Columbian art gallery. His prized collection (which I once saw at his Gutenberg apartment in a locked glass cabinet) was eventually donated to the Graves Museum of Archaeology and Natural History in Dante, Florida, near Fort Lauderdale. 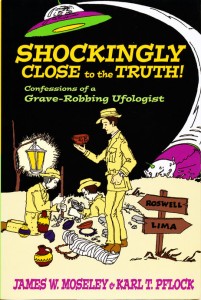 It would take a whole book to narrate all the funny, sometimes insightful, sometimes banal and occasionally outrageous, anecdotes of Jim Moseley’s unique pursuit of ufology. He kept complete diaries of his early investigations in the fifties with the intention of publishing a book someday, but he needed a partner to sort them out. This finally happened in the late nineties when he teemed up with the late Karl Pflock. Karl had an interesting background which included a professional career in the CIA and the Department of Defense and also a longstanding interest in UFOs (he had been a member of NICAP). After his retirement from government service, Pflock became a Roswell researcher (he started believing in its ET origin but in the end accepted the government official explanation of the Mogul balloon). Pflock and Moseley thought alike in most ufological topics and they struck a great partnership. Pflock had called Moseley “a time machine” because of the huge number of UFO personalities and stories he had seen or investigated first-hand. The result was the 2002 book, Shockingly Close to the Truth! – Confessions of a Grave-Robbing Ufologist. Jim was very proud of this book, as opposed to his earlier The Wright Field Story, which was a hack job produced by Barker (it was later reprinted by Tim Beckley as UFO Crash Secrets at Wright-Patterson Air Force Base). 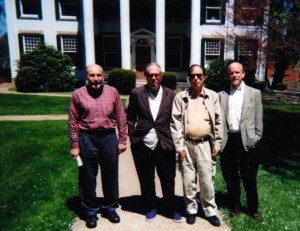 Moseley and friends attending a Conference in 2001 at the Gray Barker Collection, housed at the Clarksburg-Harrison Public Library in West Virginia, where historical records are kept. (Left to right): Tom Benson, Jim Moseley, Antonio Huneeus and librarian David Houchin, curator of the Barker Collection. (Photo: A. Huneeus)

Moseley played as well an important role in organizing UFO conferences in the period between the sixties and mid-nineties. He put together an outfit called the National UFO Conference (NUFOC), which was not a formal members organization but basically a vehicle to put an annual conference in different parts of the country. His most famous conference was a huge one with well over a thousand attendees in 1967 at the Commodore Hotel in New York City, at the peak of the flying saucer controversy in the sixties. He put another one in New York in 1980 which I attended as a journalist. One of NUFOC’s highlights was the “Ufologist of the Year” award given to a researcher every year. I was honored to receive that award at the NUFOC Conference in Miami Beach in 1990. 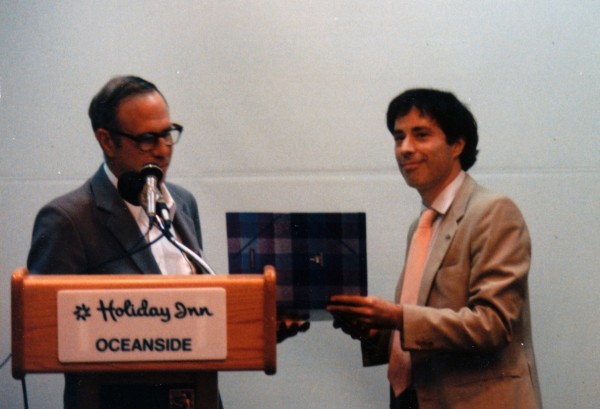 Antonio Huneeus receives the “Ufologist of the Year award” at the National UFO Conference in Miami Beach in 1990. (Photo: Huneeus Collection)

There can be little doubt that the “Supreme Commander” (as stated on the masthead of Saucer Smear) Jim Moseley was a unique personality that will never be replaced. He played the role of the joker, making a permanent social commentary about the state of ufology in America. He was an equal-opportunity cynic as the debunkers and skeptics were certainly not immune from his barbs. But underneath it all he was a good guy and he was also truly fascinated and baffled by the inside core of unexplained UFO incidents. His iconoclast style will certainly be missed and let’s hope that he doesn’t team up with Gray Barker again and begin to produce hoaxes from “the other side.” 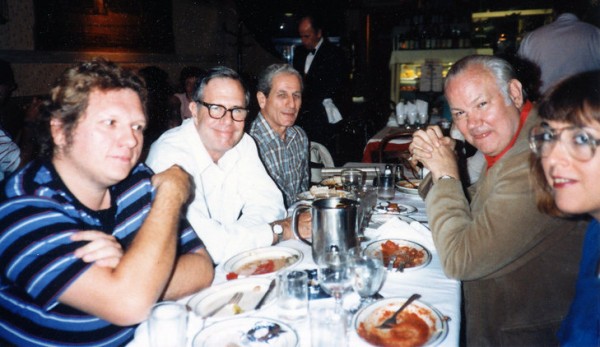 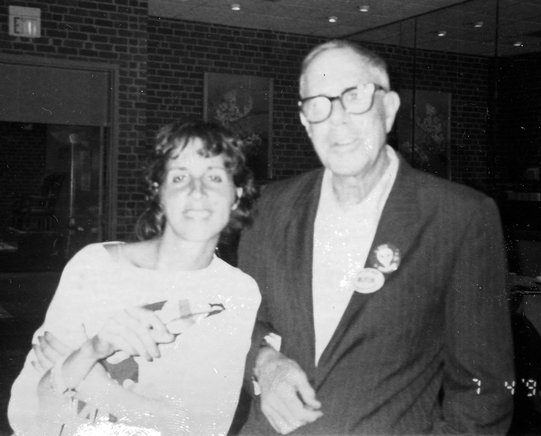