A recovered UFO in Cornwall? (VIDEO)

A witness believes he captured video of a downed UFO being transported in the South West England county of Cornwall.

The video, uploaded to YouTube on Tuesday, August 12, shows a large object resembling a flying saucer secured to the trailer of a semi truck. The unidentified object is not directly visible as it is covered with a form-fitting cover.

The witness recorded the video from a vehicle directly behind the truck and its strange cargo. The only accompanying vehicle appears to be a cautionary safety vehicle displaying attention-grabbing red and yellow stripes, flashing lights, and the warning, “Abnormal load.”

The witness agrees that the object being transported is definitely abnormal. He titled his video, “Wtf is that? UFO?” 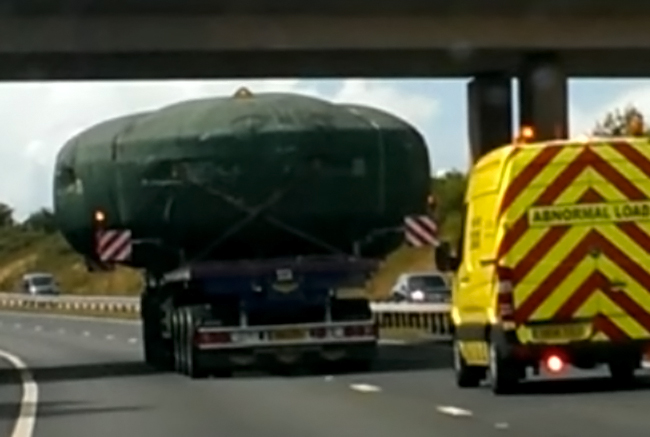 The Huffington Post UK points out that some who have watched the video have suggested that the unidentified object is simply “a large reservoir intended to be buried below a petrol station or as a septic tank, or else some kind of turbine.”

What do you think about this mysterious object being transported on an English street in broad daylight? Recovered alien space craft? Large storage tank? Post your thoughts in a comment below, or on the Open Minds Facebook page.