Moving alongside widespread use of electronic communications, the art of dating through a web-based service that includes race, gender or religious backgrounds is tapping paranormal interests with “Coast to Coast AM” Host George Noory and his startup ParanormalDate.com. 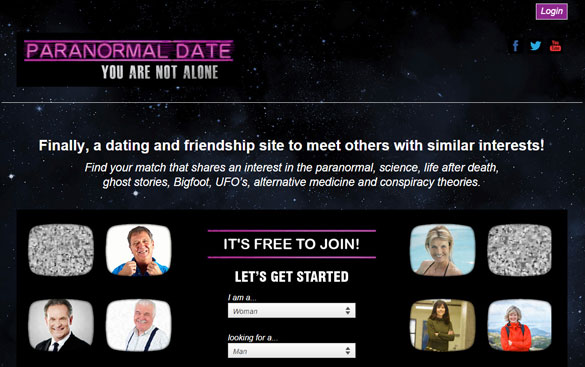 With choices like match.com, christianmingle.com, blackpeoplemeet.com  or jdate.com – your dating preferences can now be narrowed to people who have a strong interest in the paranormal.

The site asks you to “Find your match that shares an interest in the paranormal, science, life after death,
ghost stories, Bigfoot, UFOs, alternative medicine and conspiracy theories.”

The Washington D.C.-based think tank Pew Research Center released a study in 2005 showing that people who chose to use an online dating service were also people who used the Internet for a large percent of their daily tasks.

While some sites offer free trials and/or profiles, most online dating sites cost consumers about $60 monthly. The logic in the marketplace is that paying for the service saves the client time in their hectic lifestyle.

George Noory says the new dating website is ‘just another thing I’ve created that I hope will help people get together and meet others of like interests.’ Pictured: George Noory. (Credit: Coast To Coast AM)

Co-founder and website developer Mark Rollings told Lee Speigel of the The Huffington Post, “We saw that this is a large, untapped market, and with George’s special connection to his audience, it was a natural progression from his radio show and personal appearances.”

With average show broadcast stats at about 3.5 million, Noory told The Huffington Post, “This is just another thing I’ve created that I hope will help people get together and meet others of like interests.”

The new site is free during the original sign-up process, but there are fees to instant message other members and pursue dating. You can narrow your date search by region and find that special someone near you who also wants to ghost hunt or chase UFOs.

Noory has been the weekday host of “Coast to Coast AM” since January 2003. Other appearances include the History’s “Ancient Aliens” television show.