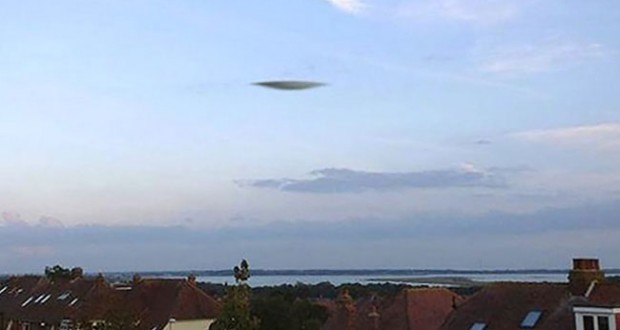 Multiple witnesses allegedly observed a UFO over the Hampshire city of Portsmouth in England.

Did anyone see it again tonight? I took this pic..#pompeyufo pic.twitter.com/KF8HPEWXYr

Local newspaper, the Portsmouth News, published a story about the UFO sightings. “My initial thought was it was an aeroplane, but it was just moving too quickly,” Rogers explained to the paper. “I was the only one that saw it but was quick enough to take the picture.” He continued, “I definitely believe in UFOs and am very interested in science fiction, and often look up at the sky in the evening wondering if there is anything or anyone else out there.”

The object in Rogers’ photo is just an elongated blur, providing no detail. The object’s appearance led some to speculate that it was simply a bird or even a cloud. The Portsmouth News checked with the Met Office, UK’s national weather service, to get a professional opinion about the unusual object. The Met’s Laura Young stated, “After looking at the images, I can say the object is nothing to do with the weather. It is not meteorological and is not a cloud.”

Media outlets around the world ran with the story about this mysterious UFO over Portsmouth, despite the lack of any real details except for photos showing a blurry object in the sky.

A major red flag with this case emerged right from the start. Although several people were posting on Twitter about having seen the UFO, or about wanting to see the UFO, all of these posts included the hashtag #pompeyufo (Pompey is the nickname for Portsmouth). And the posts generally seemed silly and light-hearted. Even Rogers was having fun with his alleged sighting. He posted, “Just found the #pompeyufo,” and included a photo of himself posing with a miniature figure of E.T.

The use of a hashtag by multiple people is a good indication that a UFO sighting is a hoax carried out with the hopes of creating a buzz to promote some upcoming event.

And that is exactly what happened in this case.

Several of the people posting on Twitter about the #pompeyufo are members of the Hill Valley Preservation Society (a group of Back to the Future fans). This group is participating in the upcoming Sci Fi and Fantasy Weekend, a weekend event in Portsmouth celebrating science fiction and fantasy. On Monday, September 22, organizers posted on the event’s Facebook page that they were responsible for the UFO hoax. It was an attempt at a viral marketing campaign for the upcoming event.

This isn’t the first UFO hoax carried out for promotional purposes. And it surely won’t be the last. The UFO hoax is always a confusing and questionable marketing gimmick. Sure, in this case, the UFO photo made headlines around the world. But all that attention is on the UFO, not the event. Although the truth about its purpose has been revealed, very few media outlets will go back and edit their stories, or choose to publish new stories about the UFO’s true origin.

But beyond the UFO’s effectiveness as a marketing gimmick, its use in instances like this perpetuates the idea that all UFOs are either hoaxes or have some other easy explanation. It’s also like “crying wolf,” which makes media outlets less likely to take UFO sightings seriously. Yes, most UFO sightings can eventually be explained. But there are the truly unexplainable instances out there that deserve widespread attention and inquiry. Hoaxes like the Portsmouth UFO make that increasingly difficult by putting the global media’s spotlight on rubbish.