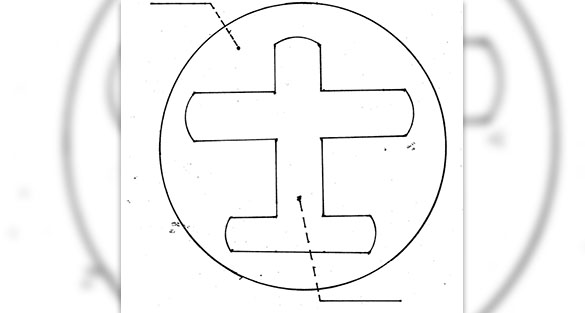 A South Carolina witness at Goose Creek recalled a UFO encounter from 1972 where the object appeared to be “camouflaged as a single engine aircraft,” according to testimony in Case 71468 from the Mutual UFO Network (MUFON) witness reporting database.

The witness is a retired American Airlines international captain with 27,000 hours of flight time.

“I have never seen any UFO outside of apparent satellites in the air,” the witness stated.“But I have seen a flying saucer. In the spring of 1972 I was working as a surveyor on a huge cleared construction site in the Goose Creek area of South Carolina. On a morning, I and several other work mates, were standing in the middle of the site. I noticed an object approaching in the sky over a tree line. It was moving extremely slow. Way too slow for and aircraft.”

The object moved very close to where the witness was standing.

“When it got within range for me to make out the profile of the object, I realized it was a disc. When it got to just about directly over me, I recognized that the disc was a sky cobalt blue color on the bottom surface with a white silhouette of a single engine aircraft of the bottom. With no apparent protrusions or appendages. Just a blank white silhouette. And no sound at all.” 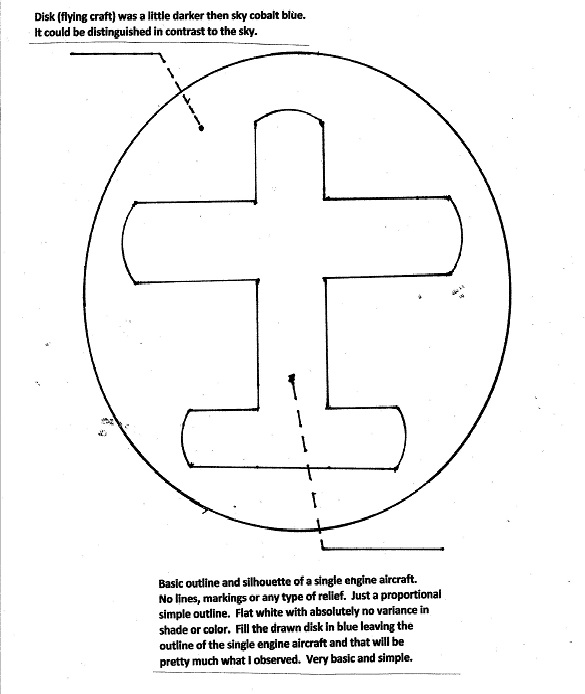 Witness illustration. The witness said the object was a blue disc with a white silhouette of a single engine aircraft on the bottom. (Credit: MUFON)

The witness quickly pointed this out to his fellow workers.

“They just laughed and said it was a white airplane. It was not. It was a blue disc with a white silhouette of a single engine aircraft on the bottom. Moving in a straight line very slowly and with no sound. I have spent my entire life around aircraft. I know what I saw and did not see. The disc continued to the other tree line in a straight line eventually out of sight. I estimate that the height was about 3 – 400 feet.”

The witness firmly believes he saw a UFO.

“Again: I have been in the skies all over this planet, but have never seen any unexplained UFO. But that day many years ago – I did. And I have freely professed this event all my life. And I have drawn it countless times. It was real. It was there. And it was a UFO which was obviously camouflaged as a single engine aircraft.”

“The object was approximately 300 feet above the ground, and appeared to be in the shape of a disc, direction of movement was not given,” Harvin and Gilmore wrote in their report.“The top of the object could not be seen. The bottom was a cobalt blue color and blended into the sky almost perfectly. As the object passed above him, the witness could make out a silhouette of a single prop white plane on the bottom surface. The silhouette showed no details other than the outline of a plane could be seen. The witness was very adamant that what he saw was not any type of plane or aerial vehicle.” 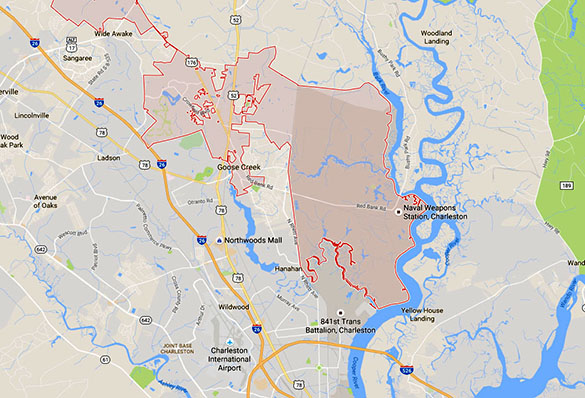 There are several military installations within a few miles of Goose Creek. (Credit: Google)

The investigators interviewed the witness.

“After talking to the witness, I believe that there is no evidence that this object is a natural phenomenon. A man-made object cannot be ruled out, but in 1973, no known aircraft existed that fits the description the witness provided. Due to the low altitude and slow speed of the object, we can rule out celestial bodies such as comets, meteors, or satellites. Weather conditions cannot be verified due to the fact the date is approximate. The witness did state that the incident occurred around the beginning of March in 1972. During the interview, the witness stated that it was a very quiet, windless, clear day, with no clouds or other aircraft in the area. The sighting took place above a very large construction site. The terrain is very flat and adjacent to a river. Several military installations were within a few miles of site at the time of the sighting, including an air force and naval base. The witness is a college graduate, with a background in engineering.After conducting the interview with the witness, our conclusion is that what he observed during the sighting is no known type of aerial vehicle. This was a unique sighting, and with the witness background as a pilot, he seems to be a very credible witness.”