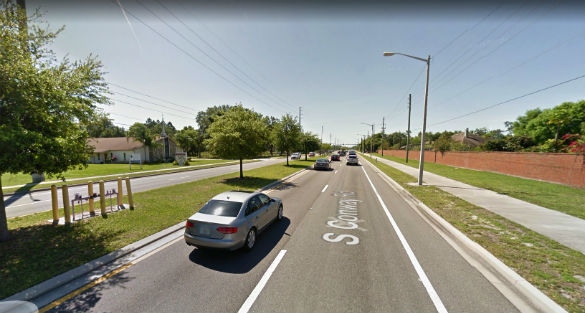 A Florida witness at Orlando reported watching a cylinder-shaped object silently hovering over a nearby building, according to testimony in Case 84126 from the Mutual UFO Network (MUFON) witness reporting database. 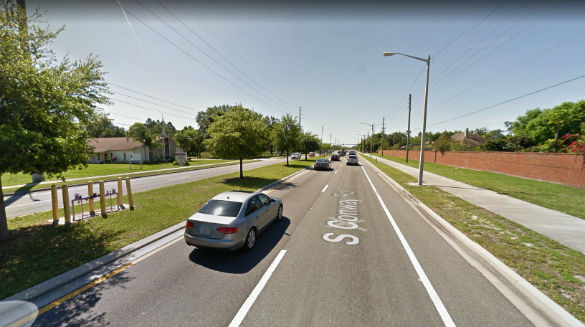 The witness was driving along Conway Road near the Judge Road intersection when the object was observed hovering over a nearby building. (Credit: Google)

The witness was driving along Conway Road in Orlando, heading north from Tradeport Avenue at 9:12 p.m. on June 1, 2017, when the incident began.

“This is a common area that planes are landing in, so seeing lights in the sky approaching us was very normal to see,” the witness stated.“I drive down this street almost daily around the same time, so am used to seeing certain sights along the way.”

While approaching a red light at Judge Road, the witness and a sister noticed planes approaching them when one looked out of place.

“I joked about how it could be a UFO because of how odd the flight pattern and lights were. We both kept steady on it; I watching while trying to pay attention to the cars in front of me. It approached us closer and closer and we both got nervous because it was the size of a plane hovering over the building off to the right side of us, maybe 50feet or less away from where we were.”

The two watched as the object hovered over a building, with lights flashing, with no sound.

“We waited to see if we were seeing things, if it was actually moving and maybe we didn’t see the movement for whatever reason. No movement, still hovering over the building and flashing lights. About 10-15 seconds after we realized it was not a plane and that we were in fact seeing a giant object hovering over a building next to us, it disappeared.” 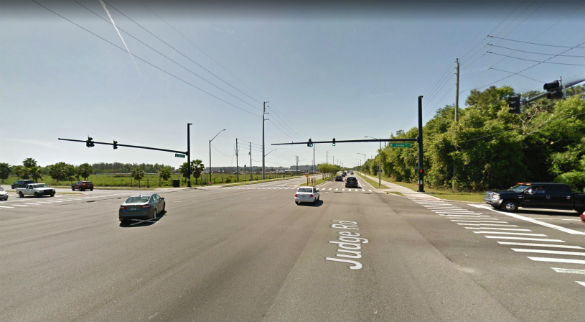 The witness could hear so sound coming from the object. Pictured: Conway Road near the Judge Road intersection. (Credit: Google)

The witness pulled off to the side of the road to see if the lights appeared anywhere.

“Nothing. The area was clear, its path had no obstructions, yet it was nowhere to be seen. So where could it have possibly gone? The rest of the way home, 15 minutes total, we talked about what to do next. Tell someone? File a report? Keep it to ourselves? We are definitely sure of what we saw. This was not normal and definitely not a plane.”

Florida MUFON Field Investigator Robert Andrews investigated this case and closed it as an Unknown UAV.

“In speaking with the witness,” Andrews stated in his report,“she said the sky was clear (no low hanging clouds) and she did not observe any smoke or other anomalies in the area. She remains quite certain that she saw ‘something’ that seemed to be hovering over the buildings with white and blue lights, but has no idea of what it may have been.

“I also considered that maybe there were low clouds and the light reflecting from the ground or overhead aircraft caused an optical illusion for the witness. However, I did not find any evidence to support that theory.

“The location of these building in relation to the airport flight path and the very low altitude of planes normal landing approach would seem to rule out the likelihood of any commercial or private aircraft flying through this area except as in a landing approach.

“The only other plausible scenario is that the witness viewed reflections from street lights, landing aircraft and interior lights of her vehicle reflecting unusual images on the windows of her car. I could not duplicate this occurrence, but I believe other MUFON cases contain many instances of this occurring. 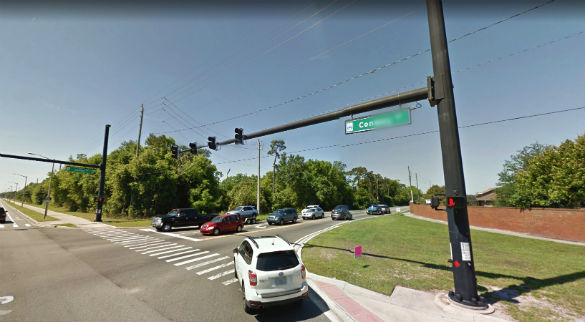 The object seemed to disappear and the witness was unable to find it again. Pictured: Conway Road near the Judge Road intersection. (Credit: Google)

“Witness said she was fairly certain of the time – plus or minus a few minutes.While I was there, I observed the same landing pattern – planes one to two minutes apart.

“If there had been an aerial obstruction – these planes would have been directed to 17R, which is parallel and about two miles east of runway 18L. While there, I observed planes landing on both runways. Planes landing on the other runway cannot be seen except farther out on their approach because of terrain and distance.”