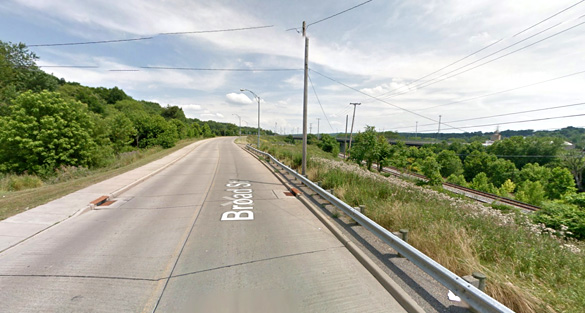 An Ohio police officer at Campbell reported “several green lights” that could not be identified about 7:50 p.m. on November 3, 2015, according to testimony in Case 72154 from the Mutual UFO Network (MUFON) witness reporting database.

“While working in the capacity of a police officer, myself (Detective Sergeant) and two other officers (both K-9 officers) witnessed several bright green lights in the sky,” the witness stated.“While standing on Wilson Avenue and Snyder on the border of Campbell and Struthers, Ohio, witnesses observed two triangular-shaped objects in the northwest sky.” 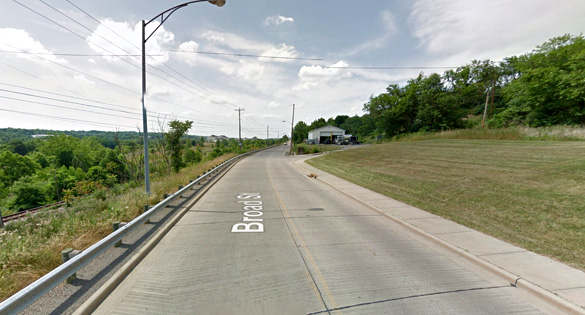 Three Ohio police officers first observed several bright green lights in the sky on November 3, 2015. Pictured: Campbell, Ohio, along a stretch of roadway where the objects were seen. (Credit: Google)

Witness B was the first to notice them and advised the other two witnesses.

“All looked to the northwestern sky to see two seemingly equilateral triangular-shaped objects with lights at each angle. The lights appeared to be an unwavering bright lime-green, with one light forward and the other two in the rear. Due to the limited amount of stars in the night sky, witnesses were unable to determine at this time if the objects were solid or not.”

The witness described the objects as another object approached.

“The two triangular objects were traveling at a very low speed from northeast to southwest. The two objects were also traveling very close together. At this time the two objects had crossed over the Wilson Avenue reference point when witnesses observed a single, lime-green in color, orb-like object following the same flight path, but seemingly lower than the other two.” 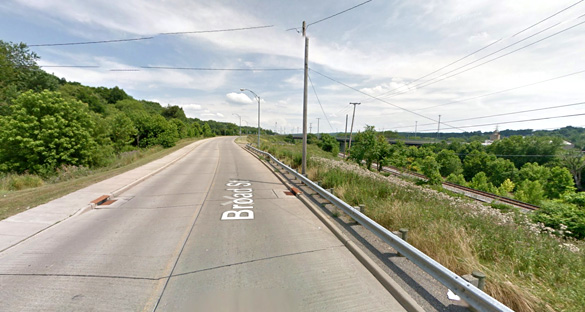 The objects continued to be tracked by the witnesses.

“At this time the two triangular-shaped objects further crossed the Mahoning River reference point, and began to spread out. The lead tip light stayed slightly ahead while the two rear lights moved up and further apart, causing an almost straight-line appearance. The lone orb-light object still trailed in the same flight path and slow speed.”

As the object flew farther away, the witnesses retrieved a pair of binoculars to view the objects.

“All that could be observed were the lime-green lights, no structure or other characteristics. The objects were observed in the same almost straight-line pattern until they traveled so far that they could not be viewed with the binoculars.”

The witnesses attempted to obtain pictures and video with their cell phone cameras, however, due to the object’s altitude and distance from the witnesses, the lower focal power of the cameras could not pick up the objects.

The case was investigated by MUFON Ohio Field Investigator Joseph Pavlansky and closed as an Unknown.

“Due to the single object being of the same characteristics of the lights that created the triangular shape then broke apart, all witnesses believe that there were seven objects in total,” Pavlansky stated in his report.“All witnesses agreed that they had never seen aerial crafts with these characteristics before. All three witnesses have extensive law enforcement careers and all three are military veterans with extensive service time. It is also to be noted that the Youngstown-Warren Regional Airport/Vienna Airbase (1453 Youngstown Kingsville Rd Vienna, OH 4447) is approximately 14 miles north of the sighting. This region is also a very busy travel route for commercial and military planes arriving and departing at Youngstown-Warren Regional Airport/Vienna Airbase and the Pittsburgh International Airport. During the sighting, which lasted approximately 9-10 minutes, there were several commercial airplanes flying in several different directions and altitudes over the immediate area.” 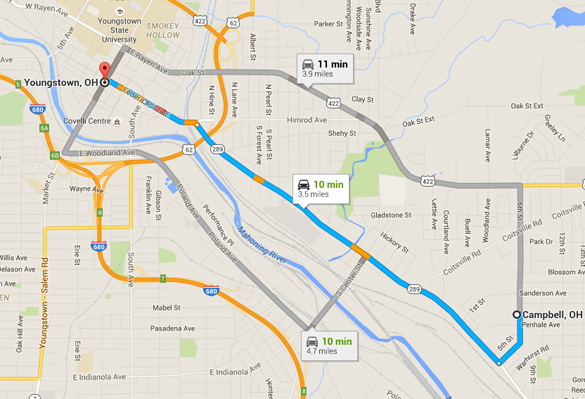 Campbell is a city in Mahoning County, Ohio, population 8,235. Please remember that most UFO sightings can be explained as something natural or man-made. The above quotes were edited for clarity. Please report UFO activity to MUFON.com.