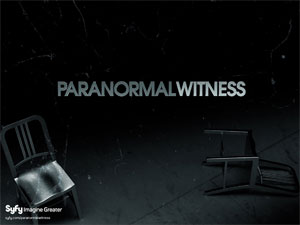 Paranormal Witness will use what are claimed to be true stories to present accounts of UFO sightings, in addition to other paranormal encounters.

This is how the series is described on SyFy‘s website:

Don’t watch it alone! Paranormal Witness is an intense, cinematic, high-octane drama-documentary series. The show brings to life the true stories of people who have lived through explanation-defying paranormal experiences.

Using a mixture of intimate first-hand testimony, personal photos and real footage, combined with grittily realistic drama, Paranormal Witness will transport you into a world turned upside down by extraordinary and terrifying events

SyFy already airs a number of shows that explore UFOs and other paranormal phenomena, including Destination Truth and Fact or Faked: Paranormal Files. Ben Hansen from Fact or Faked was a guest earlier this year on Open Minds Radio, and will be speaking at the 2012 International UFO Congress in February.

The series premiere of Paranormal Witness is Wednesday, September 7. Check your local listings for times.