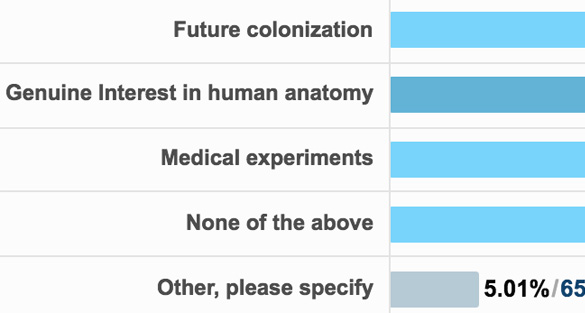 New survey shows nearly half of Americans believe in aliens

Nearly half of Americans believe in aliens, and almost as many believe aliens are visiting earth, according to a new survey. However, less than 20% believe in alien abduction, and a bit less than that claim to have seen a UFO.

20th Century Fox Home Entertainment commissioned the survey as part of their promotional campaign for the blu-ray release of the movie Phoenix Forgotten. More than 1700 Americans were surveyed. 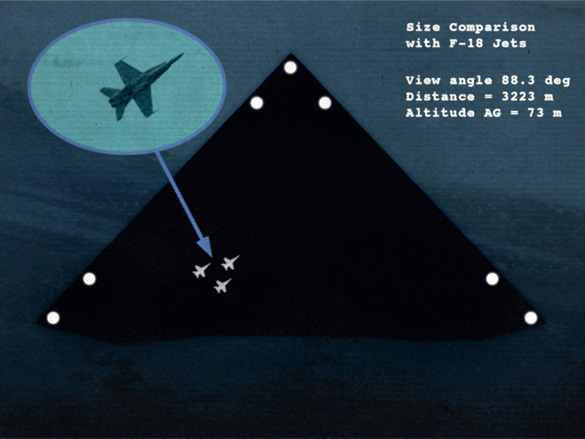 Phoenix Forgotten is a found footage sci-fi thriller that is set during a famous mass UFO sighting in Phoenix, Arizona in 1997 that is referred to as “The Phoenix Lights.”

“The Phoenix Lights phenomenon of March 13, 1997 led us to introduce a survey to find out what Americans believe about aliens,” a rep from 20th Century Fox Home Entertainment told OpenMinds.tv. “From our survey, we found that nearly half (47%) believe in aliens but less than a fifth think they’ve ever seen a UFO or alien themselves.”

Other surveys have also found that around half the population believe in aliens, but perhaps a more interesting finding in this survey was that slight less than 39% of those surveyed “believe aliens have visited Earth before.”

When it comes to the Phoenix Lights, surprisingly, 45.5% said they had heard of the event. I live in Arizona, and the topic is still hot in the news out here. In fact, I was part of several promotional interviews for Phoenix Forgotten in the local media, and people still love talking about it. Especially the fact that then governor Fife Symington claims to have seen the UFO, and believes it was an alien spacecraft. So it was not too surprising to see 80% of the Arizona survey participants had heard of the Phoenix Lights. In fact, I am not sure how the other 20% have not.

The survey went on to ask whether people felt the Phoenix Lights could have been cause by aliens. A whopping 67% said yes.

Phoenix Forgotten portrays aliens as pretty scary. Another found footage movie that premiered at the International UFO Congress in Phoenix, titled The Phoenix Incident, was also based on the Phoenix Lights event and also portrayed aliens as frightening monsters. However, these portrayals do not seem to have influenced everyone. When asked if they felt aliens would have friendly or hostile intentions, only 9% were sure they would be hostile, 25% believe aliens are friendly, while 66% say they are just not sure.

Here are a few of the other questions asked, some of which you can see are a bit tongue in cheek:

Who would you volunteer to be abducted by aliens. (Credit: 20th Century Fox Home Entertainmnet)

What do you think it would be like to be abducted? (Credit: 20th Century Fox Home Entertainment)

What would you do if you found footage of an alien abduction? (Credit: 20th Century Fox Home Entertainment)

Although some of these questions were obviously asked for fun, this survey does give us some interested insight into the general public’s perception of the UFO phenomenon and the idea that aliens are visiting Earth. More and more people seem to be opening up to the idea of alien visitation. Should we be afraid?

If indeed the Phoenix Lights UFO sightings were caused by aliens, no one was actually harmed. Recently, Kurt Russell claimed to have witnessed the unidentified lights from his personal aircraft he was piloting. He and his son, who was also onboard, obviously lived to tell the story. So at least the aliens flying over Phoenix in 1997 were benevolent. I guess they could also have been testing our defenses for a future invasion force. Or it could have been a manmade object that was mis-identified. A pragmatic person would assume the later was the case, as this is the most logical answer. But, personally, I find it fascinating that so many people are open to the more exotic possibilities.

Phoenix Forgotten was produced by Ridley Scott, and the blu-ray was released August 1, 2018.