When the media covers UFO stories they often do not do their due diligence investigating the background of the story. Such is the case with an alleged Russian UFO video that has been doing the rounds.

The misinformation started when the website UFO Sightings Daily posted a video that was uploaded to a Russian YouTube account on August 5, 2015. The title of the video, translated from Russian using Google Translate, reads: “UFO. Russia. Strange lights over the Baltic Sea!” 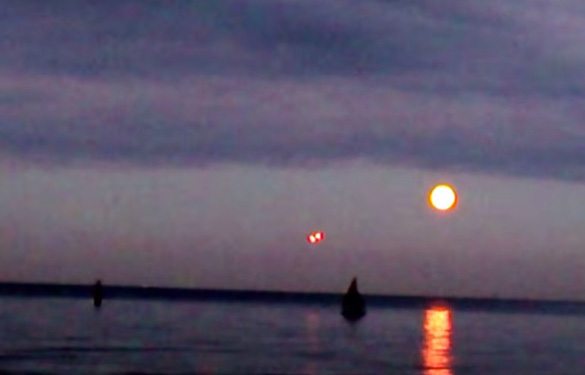 Still image from the UFO video in question. The original video can be seen above. (Credit: YouTube/Mariusz Bilski)

Although there was little to go on, UFO Sightings Daily claimed the video was taken on August 5, and took the title for face value, claiming the video came from Russia. The Mirror Online picked up the story and repeated these details.

This video actually first gained some popularity a year ago when another dubious UFO video site posted the video with the sensational title: “Russia At War With UFOs? Weird Lights Over Baltic Sea AGAIN! UFO Sightings.”

Typically, videos like this can be assumed to be hoaxes. The website that posted the video a year ago has posted many hoaxed UFO videos. It is always questionable when the original source is not referenced. However, this time the video was not hoaxed, just taken from another YouTuber and reposted.

The original video (seen above) was posted on September 10, 2014, and the original poster claimed to have taken the video exactly one year ago today on September 9, 2014. The video was posted on a YouTube site under the name Mariusz Bilski. The video does not seem to be a hoax. It is the only video posted on the account, but the account was created in 2011, and like a typical YouTube viewer, there are random videos favorited.

The title of the video, translated from Polish using Google Translate, is “UFO over the Bay of Gdansk.” 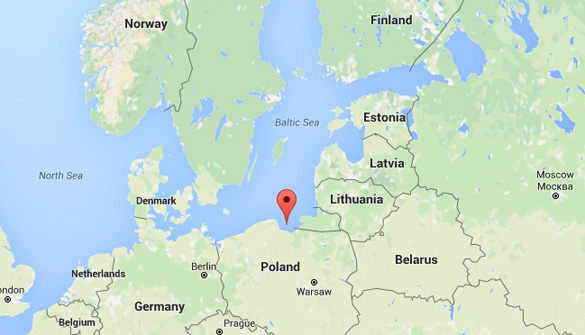 The red marker shows the location of the Bay of Gdansk where the UFO video was allegedly taken. (Credit: Google Maps)

The description reads: “Yesterday , I witnessed something that I recorded. UFO or try the Russian missiles in the Baltic do not know… But, what you see is the second of the evening such a situation at an interval of 25 minutes. Unfortunately, the first one that was more spectacular, I could not record.”

A similar video from the area, which also does not appear to be a hoax, was posted on September 14, 2014. The YouTube account is called RieseOlbzym. The video is apparently from the same area as Bilski’s video, and on the same day. The video is tilted, translated from Polish using Google Translate: “HEL – Lights over the open sea.”

Hel is a Polish peninsula in the Bay of Gdansk.

The description reads: “I am waiting for your comments. It is certainly not a plastic bag in the wind… I would add that this phenomenon of light appeared twice. First came one cluster of lights, and after a few minutes of the second. In total, three videos are combined . Data is around 9-09-2014 18:17.”

In both videos, mysterious lights can be seen over the ocean, and the videos are actually very interesting. The lights are too bright and last too long to be Chinese Lanterns, and they do not move like airplanes or helicopters. 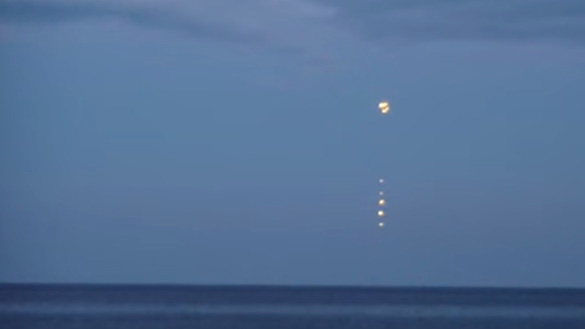 The Mirror Online has been covering UFO stories on a regular basis. However, this is a case where the facts were incorrect and the story over sensationalized. This is the second recent UFO story in which the Mirror Online’s accuracy has been questioned.

The Huffington Post ran an article recently in which former astronaut Edgar Mitchell claimed the Mirror Online completely fabricated an interview they posted in which they claimed Mitchell had told them that aliens were helping us avoid a nuclear war.

Although Mitchell says he does believe that some UFOs are likely visitors from other planets, he told The Huffington Post, “I don’t know where The Mirror got the story.”

According to The Huffington Post, Mitchell said the paper fabricated his quotes, and he said the interview with him they referenced in the story never took place.