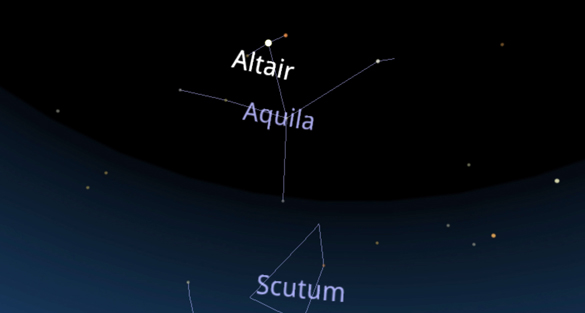 A New Mexico witness near Roswell reported watching a light flash response in the sky after setting off an LED light sequence on the ground, according to testimony in Case 77936 from the Mutual UFO Network (MUFON) witness reporting database.

The witness and her brother were about 41 miles outside Roswell and stopped along Pine Lodge Road at 9:30 p.m. on July 3, 2016, when the incident occurred. 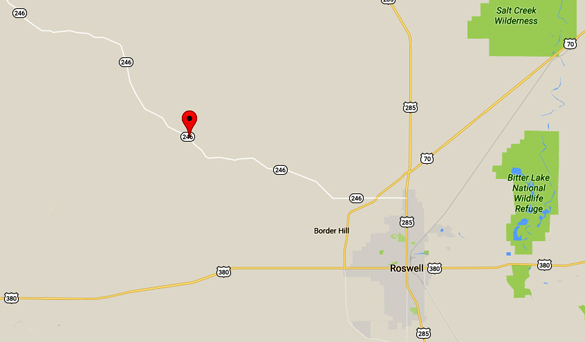 The witness was flashing LED lights and got a response from the night sky about 41 miles outside of Roswell, NM. (Credit: Google)

“We were standing in front of Chuck’s pick-up truck facing southeast,” the witness stated. “Altair (brightest star in the constellation Aquila and the twelfth brightest star in the night sky) was in our clear vision in front of us. I had tried to focus my mini cam on the area when we first arrived, but because there was no moon there wasn’t enough light for the camera. Chuck was sitting on the tailgate of his truck and noticed a single flash to the northwest. He thought it was a meteor coming straight in but never saw additional evidence of this. Chuck thought the flash could have been an iridium flare but never saw additional evidence of this either.”

The two began to star gaze.

“There was no moon, so the sky was dark with the Milky Way clearly visible overhead, but slightly to our front vision. After just a few minutes, Chuck said, ‘I’m going to try something,’ He took his remote for his truck grill LED lights out of his pocket and hit the button. The first sequence was an on-off, on-off, on-off. Chuck decided to try the next sequence which was four flashes, pause, one flash. We never expected to get a response.”

But the two did get a response.

“The response was flash, flash. Chuck looked at me and said, ‘Did you see that?’ I replied, ‘yes.’ We both laughed. I said, ‘hit it again’ and he did. We never expected it, but got a second response, flash, flash. Chuck said, ‘I can’t believe I’m seeing this’ as he looked at me in shock. Chuck said, ‘what do you think?’ I said, ‘hit the remote again!’ Chuck did and we got a double flash third response.” 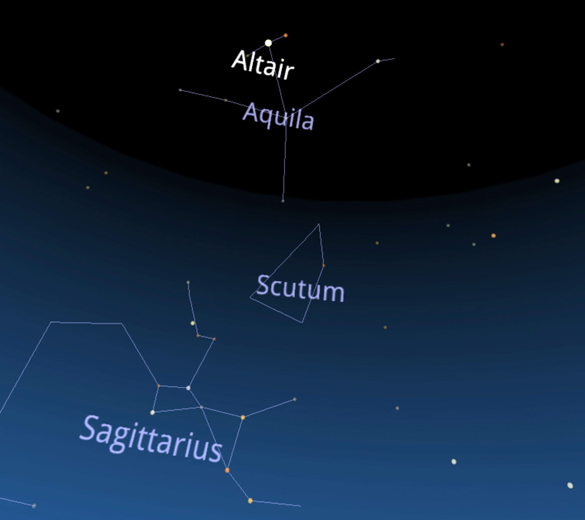 Star map showing where the light source seemed to be coming from. (Credit: MUFON)

The two tried to consider an explanation for the light response.

“Chuck kept saying, ‘It’s got to be a plane from behind the clouds.’ I said, ‘there are no clouds, that’s the Milky Way!’ Chuck decided to keep hitting the remote while I looked frantically in the area of the light for a plane, helicopter, satellite, iridium flare, anything. After the first three return double light flashes there were no more responses.”

The two continued to look for clues.

“I checked the star charts from my iPad app to best determine what area the flashes came from (Altair) and noted the time (9:30p.m.). At 10:30 p.m.: The cows in the field across the road began to moo and coyotes began to howl. Chuck had taken his night vision binoculars out a few minutes before to look at the Milky Way. He thought the flash we had seen had come from behind a cloud, but I assured him there were no clouds – just the Milky Way. The night vision binoculars proved that. We were looking at a section of the Milky Way, no clouds in our field of view. The night vision binoculars worked at first for just a few minutes, then quit. While Chuck was working on them discovering that the batteries were drained, his truck dash lights came on without any action from either of us. We were not in contact with the truck. EMF and animal reaction was now present.”

The two decided to move out of the area. 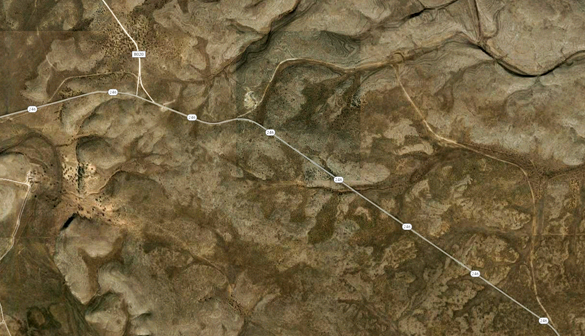 The witness was stopped along Pine Lodge Road (Route 246) about 41 miles outside of Roswell, pictured. (Credit: Google)

“Time: 10:45p.m. (One and-a-half hours after light that flashed). With the EMF effects present we decided it was time to go back to Roswell. It had been one and-a-half hours since the light flashed. We were approximately 40 minutes from town and something was causing EMF and animal reaction. We were worried about the truck electronics going out and the two of us stuck all night on the side of the road. The locals had told us of a road they feared and wouldn’t drive at night because of ‘strange goings on.’ We weren’t sure if this was the road, but thought it was time to leave. Besides, if ET wanted to visit us they obviously from the flashing light response, knew where to find us. We both agreed that the EMF was most likely coming from an outside more local source that was monitoring us being watched. Note: A dark pick-up truck passed us heading towards Roswell just before the EMF effect. Chuck also saw a red SUV. It traveled down the road we were parked at the base of approximately a quarter-mile and stopped. We had only seen one vehicle prior. One was seen right after we arrived and then two more at approximately 10:30p.m. The area is very rural.”

New Mexico Field Investigator Matthew Loveland is investigating. Please remember that most UFO sightings can be explained as something natural or man-made. The above quotes were edited for clarity. Please report UFO activity to MUFON.com.