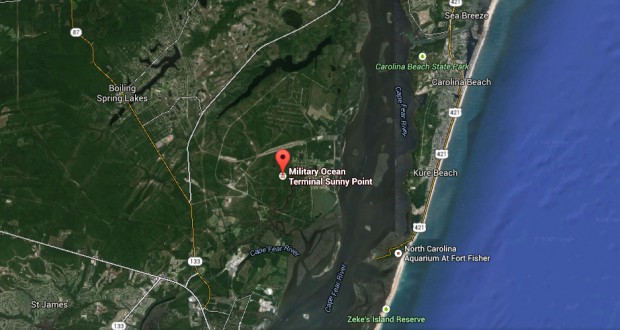 The witness waited 35 years to report the UFO.

“It was in my bucket list to do so, so here I am,” the witness stated. “Back in 1979, I was a geologist employed by the U.S. Army Corps of Engineers. My job was to accompany drilling rigs hired by them to ensure the desired objective was met. In this case, the objective was to locate cavernous areas underneath the railroad tracks that go through the military base. When found, these areas would be filled with cement to enforce the ground underneath the tracks.”

The witness explains the circumstances at the base that day.

“Trains often went by. My team and I had to have special permission to go onto the military base for this purpose. Our work hours were overnight, from about 11 p.m. through the morning.”

The site had a visitor that shift.

“On one particular night, the mayor of nearby Southport, NC, Eugene Tomlinson, stopped by at around midnight to see how things were going. He also was employed at the military base. I came down off the embankment on which the train tracks are on, and we stood and chatted. The only noise was from the drill rig, which wasn’t that bad since the rock was soft.” 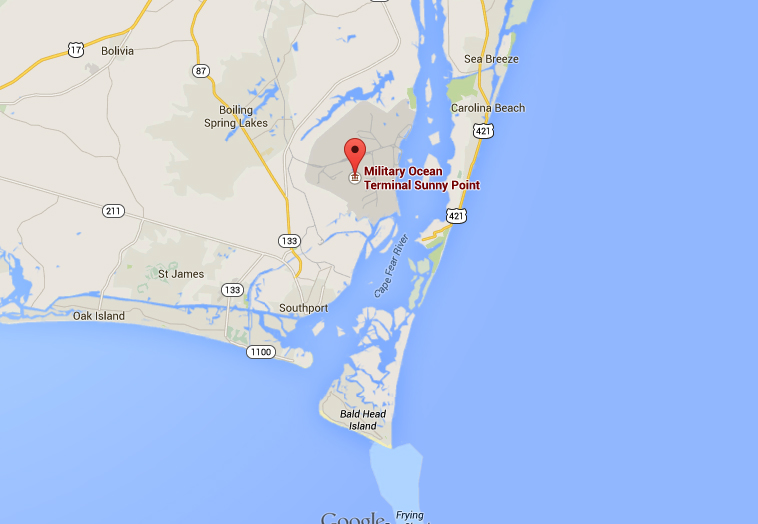 And then the object appeared.

“Soon he said to me, ‘What in the hell is that?’ as he looked straight up. I looked up and couldn’t believe my eyeballs.”
The witness described the object.

“There was a perfectly triangular, pure black ship, very slowly going along the track. It had no lights at all. In fact, if it weren’t for the fact that the ship totally blotted out the sky above it, you couldn’t see it. But it was absolutely there.”

“I heard no sound from it; granted the drilling rig was running, I still don’t believe it made a sound. I stood and watched it as it slowly flew along the tracks and out of my sight. I never saw anything come out of it.”

The witness is not sure if there were additional witnesses.

“I do not know if the guys on the drilling rig saw it; I don’t think so, because not one of them said anything to me. However, Mr. Tomlinson certainly saw the craft. The weather was fine at the time; I don’t believe we were even allowed to work if there was threatening weather. In fact, I recall it being a starry night, and marveling at how the object blacked out the stars.”

“I had just gotten up and was having coffee and breakfast in a local restaurant. They had a local newspaper available, which I picked up. As I was eating, again my eyeballs popped out when I saw a little article about how local farmers were very annoyed by unexplained, triangular burn marks in their fields. I recall no details from the article, which was very short anyway.”

The witness is sorry that no evidence was collected.

“Oh how I wish I had kept that newspaper; I did not. I took no pictures. I have nothing but my memory and and a notation in my diary of what I saw that night. It is sharp, except for things like directions (N, S, E, W), time, etc. I know it was the summer or early fall, because the weather was very warm.”

The witness is unsure of exactly how large the craft was or far away it was.

“Also, it was impossible to say the distance to the craft or its size. There was nothing to contrast it against. However, it seemed to me to be flying low. It didn’t seem to be huge or anything. Sure was a perfect triangle. Not one light to be seen on it. We had no phones, so I don’t know if they would have been affected. I never felt fear or threatened; only astonishment. I am 100 percent certain that I saw a UFO that night. I will never forget it. I simply desire that my sighting be added to the history of sightings for that year and that place. Who knows? Maybe it’ll help one day.”

Military Ocean Terminal Sunny Point is the largest military terminal in the world. It serves as a transfer point between rail, trucks, and ships for the import and export of weapons, ammunition, explosives and military equipment for United States Army. The 596th Transportation Brigade, United States Army, operates the terminal. Built in 1951 and opened in 1955, the facility is situated on an Army-owned 8,500-acre site on the banks of the Cape Fear River in Brunswick and New Hanover counties of North Carolina approximately 26 miles south of Wilmington. (Wikipedia)

Please remember that most sightings can be explained as something natural or man-made. The above quotes were edited for clarity. Please report UFO activity to MUFON.com.