There has been a lot of news this week about a UFO spotted by a NASA astronaut that was quickly identified. A similar event that took place on an Apollo mission has also been featured on a track on Daft Punk’s latest album.

The most recent event took place this past Monday, August 19. NASA astronaut Chris Cassidy radioed down to ground control that he spotted an unidentified object near the International Space Station. Russian ground controllers quickly identified the object as an antenna cover from the Zvezda service module.

Cassidy’s sighting was mentioned in the ISS status report for the day, but the reason for the media buzz is most likely the video NASA posted on YouTube of the object. They titled the video, “Unidentified object floating outside station? Sort of…” 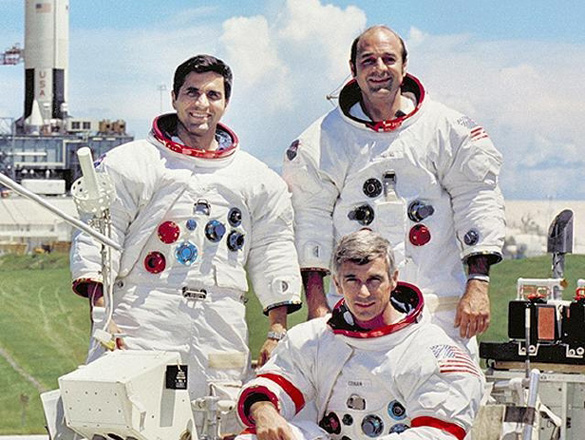 Apollo 17 in 1972 was the last manned mission to the Moon. From left to right: Schmitt, Evans, Cernan (seated). (Credit: NASA)

A similar event took place on the Apollo 17 mission, the last manned trip to the moon. On the way to the moon, Commander Gene Cernan called ground control to report an unidentified object. Part of this transmission was recently used at the beginning of the song Contact by Daft Punk on their latest album Random Access Memories. At the beginning of the song you hear Cernan say:

“Hey Bob I’m looking at what Jack was talking about and it’s definitely not a particle that’s nearby. It is a bright object and it’s obviously rotating because it’s flashing, it’s way out in the distance, certainly rotating in a very rhythmic fashion because the flashes come around almost on time. As we look back at the earth it’s up at about 11 o’clock, about maybe ten or twelve diame…Earth diameters. I don’t know whether that does you any good, but there’s something out there.”

Cernan was talking to Robert (Bob) Parker who was at ground control. While this excerpt sounds mysterious, and serves as a great start a trippy futuristic techno song, the rest of the transmission lends more insight into what the object most likely really was.

Fellow Apollo 17 astronaut Harrison Schmitt replied, “That’s the side of the S-IVB and then the engine bell, Gene.” He was referring to the upper stage of the Saturn V rocket that they hitched a ride on to get into space that was discarded earlier.

Cernan indicates later that he was not sure Schmitt was right. He called ground control again, saying:

“Hey, Bob, we got two of those flashers out there. They could be SLA [Spacecraft Lunar Module Adapter] panels. I don’t know. They’re alike in intensity and pretty regular in the bright and dim flashes they come out with, and they’re widely separated.”

Whatever it was, NASA and the Apollo 17 astronauts were convinced that it was debris from their spacecraft that they were seeing reflecting sunlight out in the darkness of space. Interestingly, these are two astronauts who night not be afraid to share their beliefs had this object turned out to be something more exotic.

Allegedly, Cernan replied to a question about UFOs in the Los Angeles Times, saying “”…I’ve been asked (about UFOs) and I’ve said publicly I thought they (UFOs) were somebody else, some other civilization.”

Schmitt later become a U.S. senator for New Mexico. In 1979, amid a large number of reports of strange cattle mutilations, Schmitt assembled a conference for law enforcement that included the FBI to conduct a large scale investigation.  In 1980, he also prompted officers at Kirtland Air Force Base in Albuquerque to investigate UFO sightings being reported by a UFO researcher named Paul Bennewitz who claimed to have photographs of UFOs over the base.

As for Daft Punk, according to an interview with DJ Falcon, who collaborated on Random Access Memories, they just needed some cool space sounds for their album. They figured NASA was the best place to get space sounds, so Daft Punk band member, Thomas Bangalter, called them up.

Falcon says they were surprised when NASA responded “super positive.”  Falcon says, “They were like ‘Yeah, definitely, cool.’ And so Thomas and [Guy-Manuel (the other half of Daft Punk)] had access to all those recordings from the missions.”

Falcon says he is a childhood friend of Thomas and Guy-Manuel, the duo that make up the French techno band Daft punk, and for reasons he can’t remember they called him Bob. So when Thomas heard the Cernan transmission, which started “Hey Bob,” it caught his attention.  The rest is Rock and Roll history.