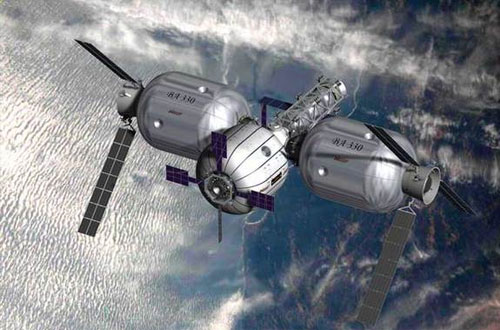 One of Bigelow Aerospace’s inflatable modules will be tested on the International Space Station (ISS).

NASA officials confirmed on Friday, January 11 that a $17.8 million deal has been signed with Bigelow Aerospace in which the Las Vegas-based private space company will deliver one of its Bigelow Expandable Activity Modules (BEAM) to the ISS, where it will attach to the station for testing. BEAM will be the company’s third orbital prototype, but it will be the first to be tested as part of a crewed spacecraft. NASA deputy administrator Lori Garver said in a statement, “This partnership agreement for the use of expandable habitats represents a step forward in cutting-edge technology that can allow humans to thrive in space safely and affordably, and heralds important progress in U.S. commercial space innovation.” 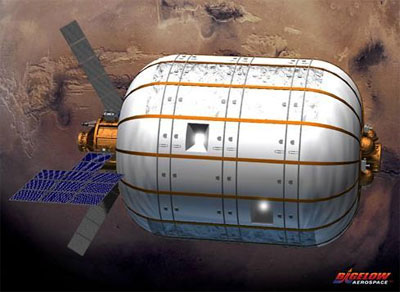 Discovery News explains, “The demonstration not only is expected to help Bigelow lease space to paying customers aboard its planned free-flying Earth-orbiting outposts. NASA also is interested in the technology for future deep space missions, such as to an asteroid, the moon, or Mars.” NASA has already tested inflatable habitats here on Earth in recent years with the same goal in mind: to utilize such technology for future missions to the Moon, Mars, or deeper into space.

Bigelow’s first two prototypes, Genesis 1 and Genesis 2, are already orbiting Earth. These prototypes were launched into orbit in 2006 and 2007, respectively.

According to Space.com, “Bigelow is also eyeing a possible outpost on the moon, for which the company envisions using its BA-330 modules (so named because they offer 330 cubic meters of usable internal volume). Several BA-330 habitats, along with propulsion tanks and power units, would be joined together in space and then flown down to the lunar surface. Lunar dirt would be piled over the modules to protect against radiation, thermal extremes and micrometeorite strikes. Then clients—be they explorers, scientists or tourists—could move in and set up shop on the moon.”

Robert Bigelow, Bigelow Aerospace’s founder and president, is a hotel tycoon on a mission to open hotels in space. But beyond that, Bigelow Aerospace wants to offer governments, companies, and individuals better space accommodations than can currently be provided by the ISS. The additional testing of the company’s inflatable habitats at the ISS will bring Bigelow closer to realizing his goal.

But as Jesse Ventura recently pointed out on his show Conspiracy Theory, there are those who believe Bigelow is involved in various secret projects, including plans to militarize space. Bigelow has collected UFO reports for years, and some believe he is hoping to harness alien technology to give him a competitive advantage in the new space race. And to illustrate Bigelow’s interest in extraterrestrials, the company’s logo, painted proudly on Bigelow Aerospace headquarters, is the head of an extraterrestrial.

Years before he started building space habitats, Bigelow began looking for the truths he was sure were out there. He says he has met with more than 230 people who claim to have witnessed ETs. In the 1990s, he gave millions of dollars to launch the National Institute for Discovery Science, whose staff — which included several PhDs and ex-FBI agents — researched alien abductions, out-of-body experiences, cattle mutilations, and other paranormal phenomena. In 1997, he donated $3.7million to the University of Nevada, Las Vegas to create a Consciousness Studies program, which offered classes about near-death experiences and psychic phenomena. At one point, he even bought a 480-acre ranch in Utah that had been the scene of a number of alleged UFO sightings, animal disappearances, and other spooky weirdness. He wanted to own the land so he could monitor what went on there.

Possible secret motives aside, Space.com speculates that the BEAM module will likely be launched and delivered to the ISS by either SpaceX or Orbital Science Corp. Both companies have contracts with NASA to deliver cargo to the ISS. But the official details of the ISS/BEAM project will be announced Wednesday, January 16 at Bigelow’s headquarters in Las Vegas.