Home / Featured / NASA scientists may have discovered life on Titan
New studies indicate the possibility of exotic life on this Saturn moon.

NASA scientists may have discovered life on Titan

NASA scientists may have discovered life on Saturn’s moon Titan.

Researchers used data from NASA’s Cassini spacecraft to study the chemically complex surface of Titan. Based on their research, scientists say it is possible that a “primitive, exotic form of life or precursor to life” may exist on Titan. This research is outlined in two separate papers; one in the journal Icarus, and one in the Journal of Geophysical Research. 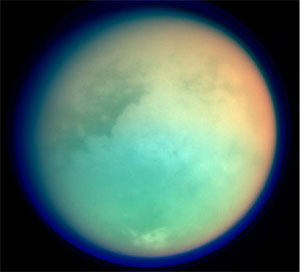 The research published in Icarus concluded that hydrogen gas found in Titan’s atmosphere disappeared at the moon’s surface. And as the Telegraph explains, this suggests that alien forms could be breathing on Titan. Similarly, the paper published in the Journal of Geophysical Research notes a lack of the chemical compound acetylene at Titan’s surface. Chris McKay, an astrobiologist at NASA Ames Research Center, explains that “this lack of acetylene is important because that chemical would likely be the best energy source for a methane-based life on Titan.” Scientists believe that life on Titan would consume hydrogen as life on Earth consumes oxygen.

Cassini also detected the presence of something appearing to be an organic compound on Titan’s surface that scientists have been unable to identify.

McKay explains the significance of these studies, stating, “If these signs do turn out to be a sign of life, it would be doubly exciting because it would represent a second form of life independent from water-based life on Earth.”

Although this new information suggests the existence of extraterrestrial life on Titan, Darrell Strobel, a Cassini interdisciplinary scientist at Johns Hopkins University who authored the paper with the hydrogen study, explains, “The new hydrogen findings are consistent with conditions that could produce an exotic, methane-based life form, but do not definitively prove its existence.”

Cassini will fly by Titan many more times, and will hopefully be able to provide additional information.