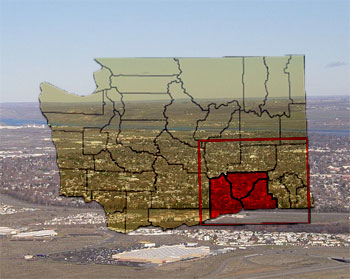 The News Tribune published a story on August 2 about strange lights recently reported over the Columbia River in Washington State. Finley, WA resident Jerry Nelson saw the UFO fly over the Columbia River near Burbank on the night of Tuesday, July 31. He described the silent object as “long” and “massive” with “three lights spaced far apart.” He is sure the craft he saw slowly gliding through the night sky was not an airplane.

And on August 3, the News Tribune published a follow-up story revealing that several more witnesses saw strange aerial lights in the area. Other witnesses report seeing lights in the sky during the same time Nelson reported seeing the UFO on July 31. One witness reports that she has “never seen anything like them before.” But Betty Jones, a Kennewick, WA resident, says she saw similar lights in the sky the following day. She explains, “They would go in a circle and back and forth. It was odd. Like it was bobbing on water.”

According to Peter Davenport of the Washington-based National UFO Reporting Center (NUFORC), eight witnesses contacted him to report the UFO. And although he says the description of these lights is consistent with a commercial aircraft, the News Tribune> reports that Davenport said Thursday “that his interest in the case is piqued.”

Some witnesses report the object or objects were silent, while others describe hearing a “popping” sound. And some witnesses suggest the lights in the sky were simply military helicopters. But no official identification has been made.

UFO sighting reports to NUFORC have nearly tripled in the past month. And this latest group of sightings in Washington’s Tri-Cities area comes only a week after a crop circle appeared in a wheat field in eastern Washington.