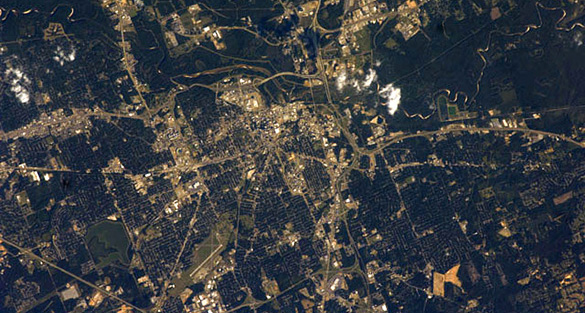 A Mississippi witness recalls an extraordinary encounter with three UFOs that moved slowly along a Jackson street at 100 feet with multiple observers, according to testimony in Case 61533 from the Mutual UFO Network (MUFON) witness reporting database.

The events unfolded along Warner Avenue about 6:30 p.m. on October 15, 1978, as the witness was delivering newspapers with his mother and sister.

“I had a paper route and delivered the Jackson Daily News, an evening paper in Jackson, MS,” the witness stated. “I had approximately 150 houses on my route so my father would normally take me on my route. But it was volleyball season and my father taught math, history, and coached volleyball at a local high school, so during volleyball season he usually got home too late to take me on the route so my mother had to take me.” 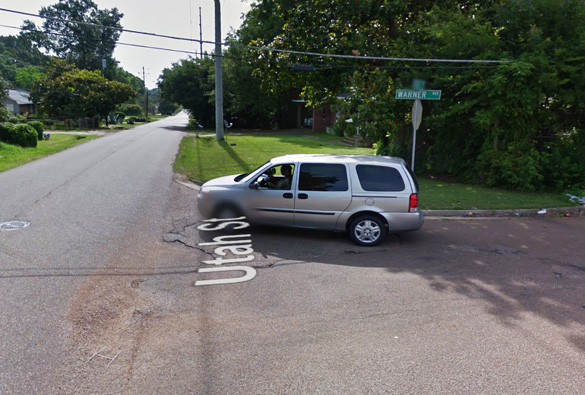 The witness was a paperboy back in 1978 when multiple UFOs flew slowly over his neighborhood. Pictured: The intersection in Jackson, MS, where the object was seen in 1978. (Credit: Google)

The witnesses’ mother did not like to be the driver because she had recently purchased a new Buick Limited.

“I paid my older sister to fold and rubber band the papers for me and when my mother took me on the route my sister had to throw the left side and I threw the right side. Anyone with a paper route knows it’s really difficult to throw papers with a new driver because they don’t know which houses to slow down for. I was 13 and my sister was 14 at the time.”

The group had turned onto Warner Avenue from Utah Street. The witness had to get out of the vehicle because his papers were landing on the wrong lawns.

“Right before I got out of the car my mother’s radio went to static. I threw the five houses on foot and was walking back to the car when I noticed everyone on the street starting to come outside. They were asking each other who had power – apparently power for that entire street had went off.”

The witness then noticed residents of the street pointing into the sky.

“Then about 10 houses down from the yard I was walking through I noticed two elderly women pointing up in the sky at something. I looked briefly at what they were pointing at and I just dismissed what I say as a low Goodyear Blimp flying with the advertisement lights on the side. The Goodyear Blimp was a common site in Jackson during that time. I climbed through the window of the backseat to get into the car because if I opened the door all the papers would fall out of the car. But my mother’s car had shut off and would not crank back up.”

The witness got out of the car again and asked his mother to pop the hood to check the battery.

“That’s when I noticed every single car on the street that was running had stalled. There were now more neighbors outside pointing up at the objects and I looked again and it was not about 100 feet away from us heading toward us and only about 100 feet above the ground. And instead of it being one large blimp like I originally thought, I could now see that there were three separate objects, one behind the other about 50 feet apart in a single line moving very slowly down Warner Avenue.” 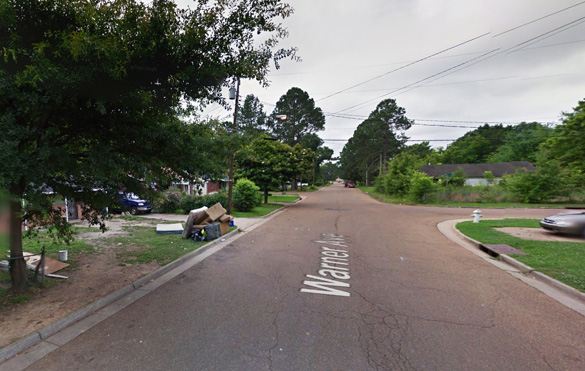 The witness first thought the UFOs were one object and possibly the Goodyear blimp. Pictured: The street in Jackson, MS, where the object was seen in 1978. (Credit: Google)

The witness described the three objects.

“The first one was shaped like a pentagon and was gun metal black and had blue lights around its perimeter with a pulsating red light in the middle. This object was so close I could not see the top of it. It shined a very bright, intense white light on one of the houses and then walked the light down towards our car, like a police helicopter does…but it was totally silent. This thing was so close to me I could have it with a tennis ball.

“The one behind it was also shaped like a trapezoid and I could see the second ‘story’ or layer of this craft and there was a white section that looked like windows and I could see beings moving through this section. It had orange and green lights on its perimeter but I don’t remember if it had a pulsating red center light like the first one.

“The first one was so close to me I could see patterns in fixtures in its underbelly. The second one did not shine a light down like the first one did until it passed over our car and was a good 100 yards away. The second object appeared to be jet black.

“The third object was shaped more like a diamond and it had blue and green and white lights and this object was actually ‘tumbling’ slowly or rotating slowly on its horizontal axis. It was seemed to have a jet black surface as opposed to gun metal like the first one.

“Behind the third object was a small red ball of light moving along with the three objects. It took me a couple of minutes before I realized that these objects were not some kind of quiet airplane or some kind of new blimp with a new shape.”

The objects seemed to be in no hurry to move away.

“These three objects were in no hurry whatsoever and almost seemed to be ‘parading’ for us. They went about two thirds of the way down Warner Avenue and then began a very slow ascent up and to the right in the direction of the full moon. Once the objects were approximately a mile or two away, all the power came back on the street and my mother’s cars headlights came back on and she restarted the car. These objects were in view for 20 to 30 minutes and in no hurry whatsoever.”

The entire event lasted between 20 and 30 minutes.

Family members rarely spoke about the events of that October day.

Jackson is the capital of Mississippi, with a population today of 173,514. 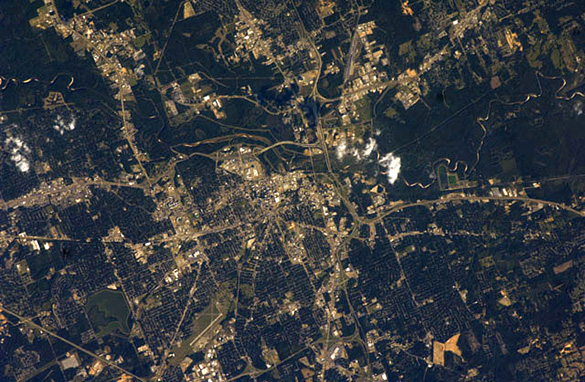