Multiple UFOs were seen flying through the night sky on October 7, 2011 above Stevenage in the UK. 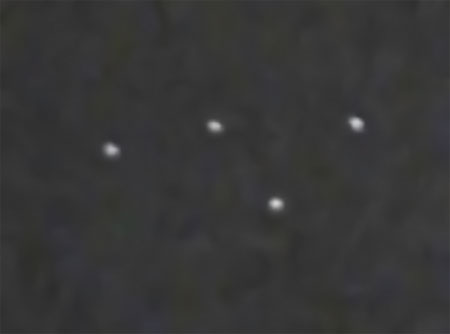 Multiple UFOs were seen flying through the night sky on October 7, 2011 above Stevenage, a town in Hertfordshire, England. News website The Comet describes the four bright objects as “moving fast in a shifting formation against a star-lit sky.”

The witness who captured the UFOs on camera provided this description:

I watched these objects for about 20 seconds but unfortunately the recording was only nine seconds due to the battery running out. It was a clear star-lit night. The time on the recording is wrong it was actually recorded at roughly 10.30pm. The objects travelled in a north-westerly direction, these could not be seen with the naked eye. The objects must have been very high and traversed the sky very fast as you can see by the fixed stars.

The witness captured this footage using a Yukon Ranger night vision monocular paired with the Yukon MPR mobile player/recorder. Flocks of birds have been to blame for some night vision UFO videos showing multiple objects flying in formation. That could explain the objects in this night vision video as well. But the video could also show something else entirely.

What do you think these strange lights are? Birds? Jets? Extraterrestrial craft?