Multi-colored fireball UFO witnessed by thousands across the southwest U.S. 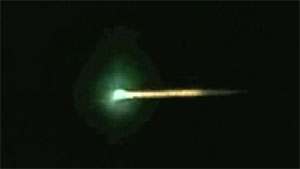 A fireball UFO was seen streaking across the night sky over the southwest United States on Wednesday night. Thousands of witnesses from Arizona, Nevada, and California witnessed the incident that occurred at approximately 7 p.m.

According to CBS Los Angeles, “The first reports came from Riverside County around 7 p.m. Wednesday. Within a half hour, several Orange County residents also reported seeing the lights. After about an hour, reports were coming from all over the West.” The descriptions given by witnesses vary, but many who saw the mysterious object reported a burning object that was blue, green, yellow, and orange in color.

News stations and police stations across the southwest were flooded with calls and emails about the UFO. Lieutenant Justin Griffin from the Maricopa County Sheriff’s Office in Phoenix witnessed the object, and explained to Reuters, “It took an unusually long time to get across the sky.” But he continued, “It’s like a meteor. It’s not like we had any flying objects with little green men or anything like that.”

The FAA also received several calls about the light in the sky. According to MSNBC, “FAA spokesman Ian Gregor confirmed that there were no aircraft incidents reported in the Western region.”

Open Minds journalist Alejandro Rojas saw the object in the sky and provided this statement:

I was a few miles out of Phoenix headed south to Maricopa when I saw a large meteor or space junk breaking up in the night sky. It was very bright and for a second it sparked extremely bright, lighting up the surroundings. It was a bluish light, that faded soon after the large spark. It looked similar to this video from New York. The object appeared to be moving west to southeast.

Several media sources were quick to point out that NASA recently announced that the Upper Atmosphere Research Satellite would fall to Earth, but the timeline given by NASA for that was “by September’s end.” So while this could have been a reasonable explaination for the fireball UFO, NASA does not expect the satellite to fall for another week.

Jet Propulsion Laboratory’s Don Yeomans, who manages NASA’s Near Earth Object Program, told the Los Angeles Times the object was probably a “near-earth asteroid,” and not a cause for alarm. He went on to explain, “We are fairly confident . . . that it was not a spacecraft or space junk.” Yeomans also offered an explanation for the color of the falling object: “The bluish-green color suggests the object had some magnesium or nickel in it. Orange is usually an indication it’s entering earth’s atmosphere at several miles per second, a moderate rate of speed.”

Similar to Yeomans’ explanation, Ed Krupp, director of the Griffith Park Observatory in Los Angeles, said the UFO was most likely “a piece of interplanetary debris” burning up in Earth’s atmosphere, according to MSNBC.

But some witnesses, including journalist Brien McElhatten of ABC15 in Phoenix, saw more than just one light in the sky. And there are multiple times cited by media sources for the sightings. As previously stated, CBS Los Angeles reported, “The first reports came from Riverside County around 7 p.m.” But according to MSNBC, witnesses “saw the light move quickly from west to east at around 7:45 p.m.”

McElhatten managed to snap a photo of each object he observed.

MSNBC pointed out that, according to The American Meteor Society, “two known meteor showers are active this week, the Iota Cassiopeiids and the Epsilon Perseids, which peaked on September 12 and 10, respectively.” Meteor showers could possibly explain the multiple lights in the sky. But the American Meteor Society also stated that “bright moonlight would obscure viewing for all but the brightest of heavenly fireballs this week.”

KTLA reported that the California Highway Patrol “received numerous reports of fast-moving green, orange and blue flashes of light from Riverside, Palm Springs, Indio and the Salton Sea.”Another interesting detail provided by witnesses is the description of the object as moving horizontally through the sky. Additionally, a witness video used by multiple news stations shows what appears to be multiple lights — one of which seems to zig-zag through the sky. It’s possible that this video is completely unrelated to the fireball incident. Also interesting is the statement from some witnesses who claim the object hovered in the clouds for a period of time.

Despite the opinions that have been offered by experts, the strange UFO or UFOs witnessed by thousands in the southwest United States remain unidentified.