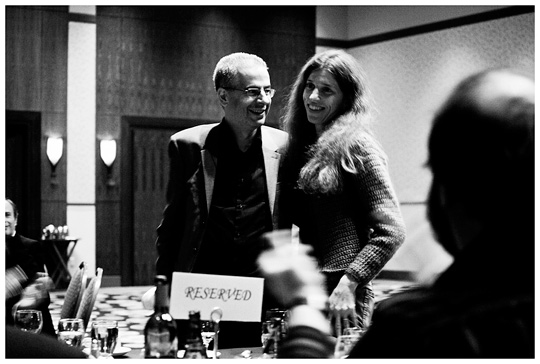 The newlyweds are applauded as their marriage is announced at the UFO Congress banquet. (image credit: Peter Beste)

Pope, an author and journalist, worked for the UK Ministry of Defence (MoD) Flying Saucer Working Party (FSWP) from 1991 to 1994. The FSWP was started in 1950 by the MoD’s chief adviser, Sir Henry Tizard, who suggested that the matter of UFOs be taken seriously. When Pope initially joined the group, he, however, did not take the matter serious, thinking the whole thing “complete rubbish”. Although, given time and having researched the UK’s extensive files, Pope eventually changed his mind. Now he lectures around the world on the subject, believing that UFOs are a real phenomenon and one that does pose a threat to national security.

Pope still serves as an adviser to the British government, most recently aiding in the release of the British UFO files by the UK National Archives, an ongoing process which garnishes media attention every time a batch is released. Earlier this month a group of files were released and headlines are still popping up worldwide regarding their revelations. More on the UK’s UFO X-Files can be seen in Open Minds Magazine Issue 5.

Pope recently spoke to a group of influential business men in Saudi Arabia. Along with respected colleagues, such as Stanton Friedman, Jacques Vallee, Dr. Michio Kaku, and Dr. Zafghloul El Naggar, they addressed the possibility of extraterrestrial visitation as a part of the forum titled, Contact: Learning from Outer Space. The conference was encouraging out-of-the-box thinking as a way of enhancing global competitiveness. Some of the influential speakers of this summit included former U.S. President Bill Clinton, and former British Prime Minister, Tony Blair.

Pope’s most recent adventure is his marriage to American Physical Anthropologist at San Jose State University, Dr. Elizabeth Weiss. Pope was in town to speak at the UFO Congress in Scottsdale, Arizona when he and Elizabeth snuck off to a courthouse in Phoenix, Elizabeth’s parents in tow, to join in Ufological matrimony. This is Pope’s first marriage and the glowing newlyweds were certainly a nice addition to a great conference. Nick was gracious enough to provide us with some picture of the marriage.

An interesting post script to this story is that the night of the International UFO Congress Awards Ceremony, just after the Popes’ marriage was announced, confirming the already circling rumors, door prizes were handed out. The luck of the draw had it that the first winner was Elizabeth Pope, and the prize was a sculpture of an alien baby, which was actually kind of cute as bizarre as that may sound. Unfortunately, Pope did not send me a picture of the sculpture to prove my last statement.

We congratulate Nick and Elizabeth and wish them the best! 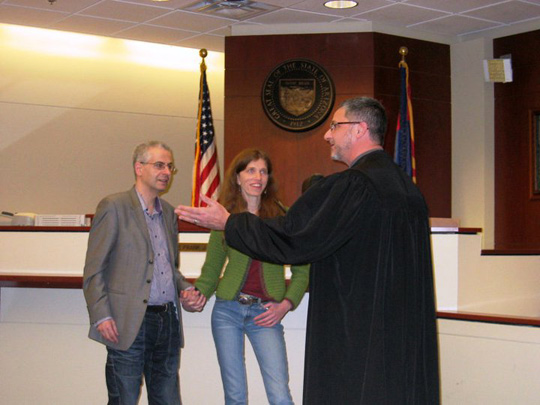 Nick and Elizabeth at the Court House. (image credit: Gisela and David Weiss) 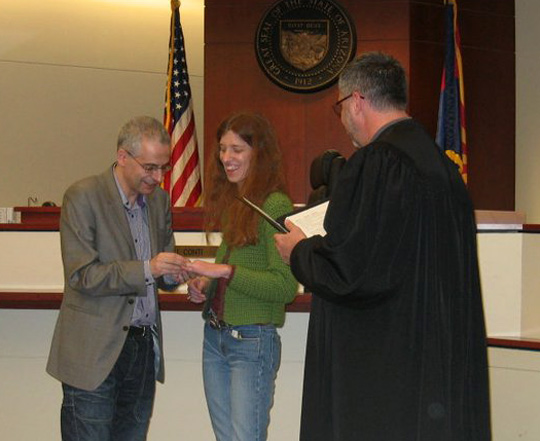 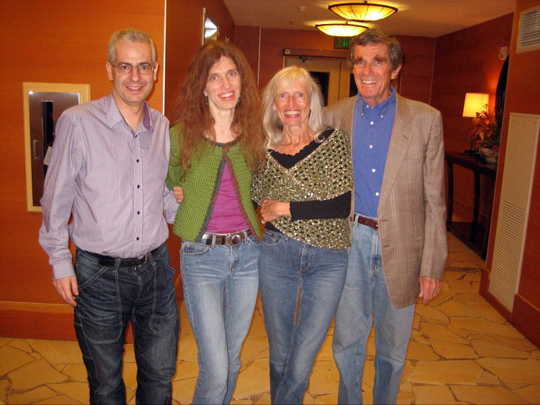 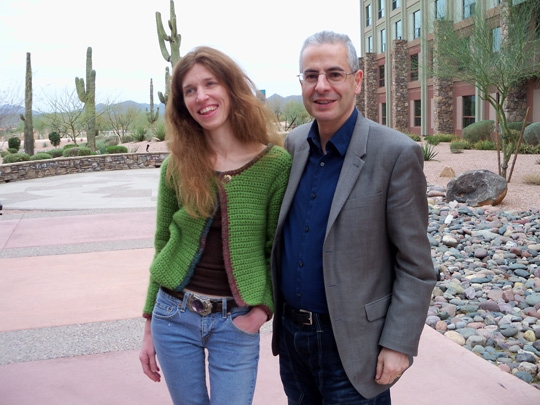 The happy couple were caught outside donning their ever present newlywed smiles. (image credit: Antonio Huneeus)

You can find more information about Nick Pope’s talk at the IUFOC here.