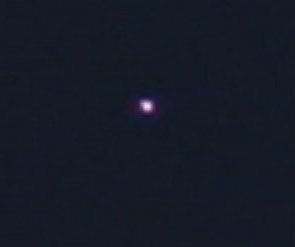 Residents in Blue Springs, Missouri have seen multiple UFOs in the night sky for the past two weeks. The objects are described as bright hovering orbs that change color. A witness even claims to have seen one of these orbs rapidly drop in altitude. Other witnesses have described zig-zagging behavior, and have observed these objects disappearing and reappearing.

Some sources indicate the lights have been seen in nearby Independence, MO as well.

According to KCTV5, Missouri MUFON (Mutual UFO Network) is investigating these sightings. Assistant State Director Margie Kay interviewed witnesses, then set up telescopes to observe the lights for herself. Her initial assumption upon viewing the first light was that it was the bright star Vega–the brightest star in the constellation Lyra. But as other similar lights appeared in the sky, Kay was stumped. After reassessing her opinion, she told KCTV5, “I don’t think it’s a planet at this point. I don’t know what it is. It’s unidentified.”

KCTV5 reportedly contacted local police, but police have received no calls about the mysterious lights. KCTV5 also contacted the FAA, but was redirected to NORAD, where a spokesperson confirmed that a similar sighting had been reported, but the objects have not been identified.