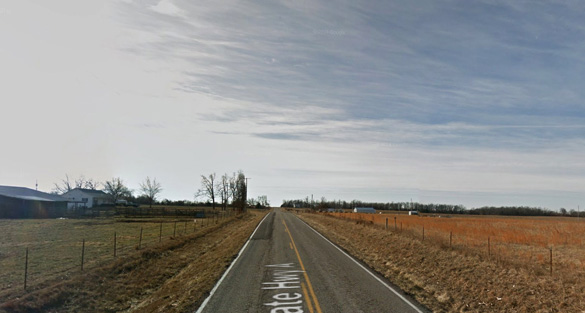 A Missouri couple driving north along Highway A in Long Lane reported moving under a triangle-shaped UFO hovering about 25 feet above the roadway on June 17, 2014, according to testimony in Case 57123 from the Mutual UFO Network (MUFON) witness reporting database. 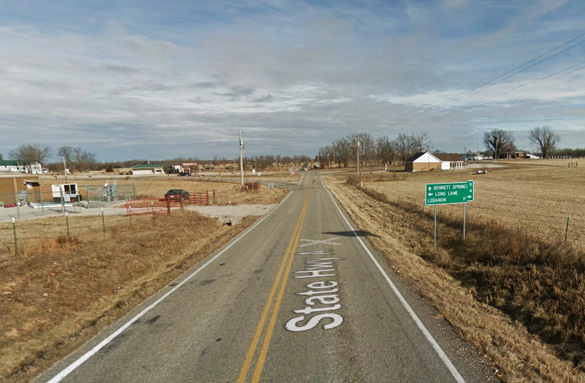 The couple was driving along a stretch of Highway A near Long Lane, MO, pictured, when they approached and drove under the hovering triangle-shaped object. (Credit: Google)

The husband was driving with the wife in the front passenger seat and their daughter in the back seat when the object was first seen at a distance of about a quarter mile ahead. They quickly began to rule out objects like a tower or a helicopter as the approached it.

“Within a few a seconds we were directly under it in the middle of road,” the wife reported. “We stopped for approximately 10 to 15 seconds – felt like a lot longer. It was about 25 feet above us. I say this because I could see things on the bottom of it and when we drove off it was about 10 to 15 feet above the trees.” 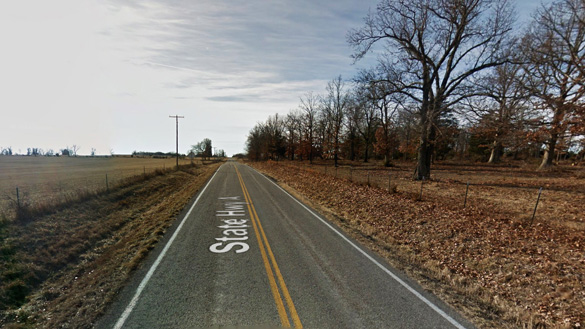 Several other cars drove along this stretch of Highway A near Long Lane, MO, on June 17, 2014, when the reporting witnesses say the object hovered just above the tree tops. (Credit: Google)

“It was triangular, dull gray, with darker long shapes on bottom. Brighter light in middle, two smaller lights on both sides of front point, two small lights on both sides of large light, then three lights across wider backend. The light was not normal. Don’t know how to explain it. Bottom was flat and had some sort of bars or legs that the lights kind of reflected off of.”

The husband wanted to get out of the vehicle for a better look, but the wife yelled for him to pull away as she was scared.

“He started to drive away and I grabbed for my phone to take pictures but was too shook up and scared to work my phone. It sat in same spot after we drove away. We could see it until trees started blocking it out. Three or four cars passed as we were driving and it still didn’t move. Later my husband and daughter said they couldn’t stop staring at the strange lights. My husband acted happy and giggly. My daughter was scared also.” 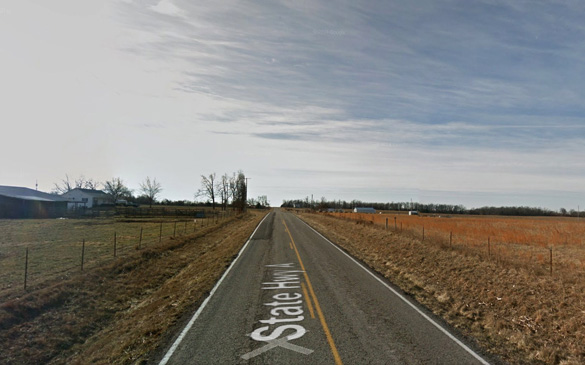 The triangle-shaped UFO hovered about 25 feet off of the ground while traffic moved along Highway A near Long Lane, MO, on June 17, 2014. (Credit: Google)

Long Lane is an unincorporated community in Dallas County, MO. Missouri MUFON is investigating. Missouri has a current UFO Alert Rating of 4 with a higher than average number of recent reports nationally. Missouri had 19 UFO reports in May 2014 – the 12th highest reporting state – while California had 102 reports as the highest reporting state. The above quotes were edited for clarity. Please report UFO activity to MUFON.com.