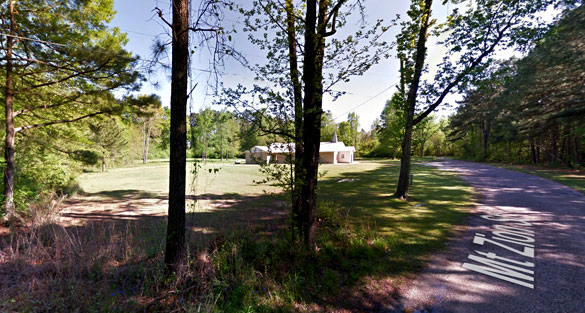 A Mississippi witness at Foxworth recalled a UFO incident from 2005 that includes a close encounter and possible abduction, according to testimony in Case 77312 from the Mutual UFO Network (MUFON) witness reporting database.

The events unfolded shortly after Hurricane Katrina moved through the area in 2005 and are best told in the witness’s own words.

“Around August 23rd through the 24th of 2005; Hurricane Katrina’s Eye came over my parent’s home,” the witness stated.“The hurricane came from the south from New Orleans and the Gulf of Mexico and proceeded north going over Foxworth and Columbia, Mississippi, from which I was living at the time with my parents.” 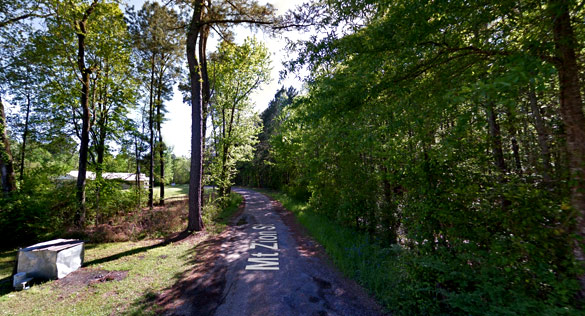 The witness was standing in a creek in 2005 when the UFO approached. Pictured: Foxworthy, MS. (Credit: Google)

The hurricane then moved northeast/east going over Hattiesburg, Mississippi.

“Complete devastation of trees, buildings, animal life – such as cows and deer which were thrown against and wrapped around bob-wired fences – and were later discovered dead. In addition, homes and boats completely obliterated from every angle the eye could see.”

During this time, the witness was working on a garbage truck as a hopper for the City of Columbia.

“On Monday, August 29th,2005 – after a 12-hour day hauling rotten garbage due to the electricity going out and everyone that didn’t have a generator had to throw away everything they had in their deep freezers and refrigerators – this event was causing serious smells at every home we arrived to extremely stinking garbage to be hauled away.”

Almost a week later and there was still no running water.

“So in extreme need of a bath or shower and refusing to settle washing myself down with wet rags and a bowl of water, I decided to take a ride to a creek nearby a church I use to attend. After arriving at the creek in pitch dark – so dark I couldn’t see my hand if placed on my nose – I stripped down and went skinny dipping, feeling so refreshed washing the rotten garbage smell off my body.”

Then the witness saw the UFO.

“As I was washing my cloths and scrubbing myself down with icy cold, creek water and soap, a huge, round-like airship with amber glowing orbs came heading straight towards me from the south-southwest. As I was watching this object coming towards me, completely naked while washing myself and my work cloths, I realized these three amber, yellowish lights were coming towards me at a rate of speed no greater than about 30 mph and at an altitude of about 100 to 150feet – just barely clearing the tops of pine trees.”

The witness seemed to react to the UFO.

“I could no longer move a muscle in my arms, legs, neck, fingers or shoulders – as if I were completely paralyzed or possessed as the aircraft arrived straight over my head. As the aircraft arrived straight over my body, I was completely paralyzed to any motions whatsoever, but I did feel the water moving. I am blessed that I was standing up in a shallow part of the creek that wasn’t deeper than my waist or else I believed I would have drowned if I were swimming.”

The witness continued to watch the UFO.

“The amber cloudy-like orbs with a trace of something like a reddish-yellow tint swirling inside the amber orbs had all of a sudden turned to a white-colored orb with a baby blue tint swirling inside these ivy white orbs. When the orbs of this UFO were the color of amber, and before it was coming toward me, I was extremely scared out of my wits. All I wanted to do was run away from this UFO as fast as I could.”

But now the witness’s feeling of the event changed.

“However, seconds after the orbs of this UFO turned white and then swirled the baby blue tint inside of its orb, I felt a connection somehow with this craft. I instantly went from being scared and wanting to run in the opposite direction of this UFO, to feeling at peace. I felt that whatever this object was had no intention in harming me. I still have no idea what it could have been if it was not a UFO because it had absolutely no sound while moving or hovering over my head. There was some heat to the light, but it wasn’t hot enough to burn me. It seemed as if it read my mind to determine not to burn me because as the few moments it was scanning me the lights got really hot and I asked it to not burn me in my mind and the lights started to dim to where it wasn’t hot anymore.”

The UFO continued to hover in place.

“This UFO seemed to hover over my head for about 5-10 minutes and then the ivy white, baby blue orb-like lights turned yellowish-amber again and started to fly from the southeast-east going toward Columbia and flying toward Hattiesburg, Mississippi.”

The witness described how the object approached and moved away. 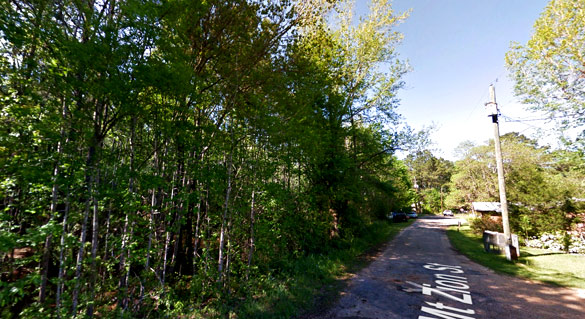 The witness has not seen a UFO again since this incident.

“This was the last time I have ever encountered a UFO up-close and personal. I have only encountered lights before this that would shoot across the sky like a shooting star and all of a sudden move in a completely different direction of travel like a V-shape in the sky.”

The witness described the events after the UFO encounter.

“After this encounter I raced back home and my parents asked me where have I been because about five hours had passed by on something that I felt only took a few minutes. I remember leaving right after it turned dark at about 7p.m. and got home just minutes before midnight.”

The missing time was only the first strange piece of the story.

“And a week after this encounter, I started receiving hair loss. My hair fell out and never grew back until this day. In 2004 I had an MRI to determine if I had any back problems for an interview to be a roustabout for Diamond offshore; but my father told me to stay in college and to not take the job. The MRIs taken in 2004 showed absolutely nothing wrong with me. But after this encounter in 2005 I started to get minor back pains.”

The witness moved on with his career.

“In 2007 after getting an associates degree in electronics at PRCC, I took a job with AT&T to work in New Orleans to help rebuild the damage the hurricane caused by flood waters that got so high in some areas that actually got in the cables of the telephone poles and over the peak of house roofs at a height of 25 feet.”

The witness developed a tumor.

“On September 1, 2009, I had to have a tumor removed from inside my spinal cord. The doctor wanted to remove the tumor because it got so large inside my spinal cord that it busted out of my spinal cord and was wrapping around the vertebras outside of my spinal cord. The doctor ranked in the top 10 of all surgeons in this field in the USAand wanted to remove this tumor because he was scared it was going to rupture the main artery that runs down the spinal cord. If this artery got ruptured, I would have bled to death within minutes before I could get any medical attention. And if I did get to the hospital, no doctor would be able to diagnose the problem before I bled to death internally.” 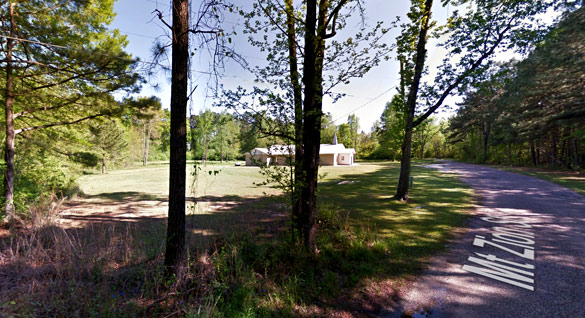 The witness seemed to connect with the UFO during the encounter. Pictured: Foxworthy, MS. (Credit: Google)

The witness additionally suffers from nightmares.

“In addition, ever since this encounter I have been getting nightmares of being abducted and taken right outside of Earth’s orbit to a bee hive, honey cone-like mothership and not being able to move or wake up until I am returned back to my bedroom. I don’t know if I have ever been abducted or if they caused this tumor or if I have been implanted with something that hasn’t showed up on an MRI other that this tumor that was inside my spinal cord or if these nightmares that seem extremely real are an actual reality and not just dreams. But I do know for a fact I have never had any back problems since this encounter in 2005.”

The witness has been quiet about the encounter.

“I haven’t told many people about what I saw in the summer of 2005 because the people I did mention this to, including family, looked at me as if I am lying; trying to receive attention; or just simply think I am crazy for the dreams I have been receiving or the encounter I witnessed.”

The witness is curious if there may have been other witnesses.

“However, I am extremely curious if anyone in the state of Southern Mississippi saw these lights I witnessed in the summer of 2005; just days after the worst hurricane that hit in the history of United States of America – a hurricane that did the most damage, cost-wise, in United States history. I am not looking for attention. But I am curious if anyone has witnessed anything similar to the most painful and terrifying surgery I was left with after an encounter that will change my life forever.”

Mississippi MUFON is investigating. Foxworth is in Marion County, MS. Please remember that most UFO sightings can be explained as something natural or man-made. The above quotes were edited for clarity. Please report UFO activity to MUFON.com.