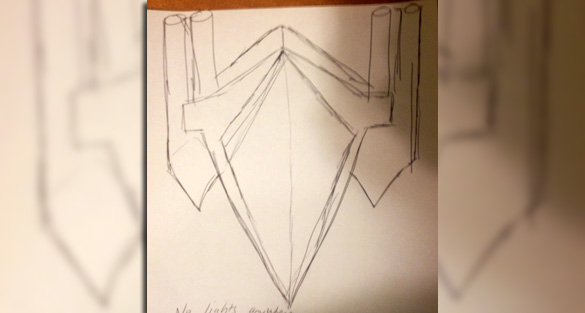 A New Jersey witness at Manalapan reported watching a “black, massive, triangle-shaped” UFO about 9:50 p.m. on June 22, 2015, according to testimony in Case 66935 from the Mutual UFO Network (MUFON) witness reporting database.

The witness was visiting parents in Manalapan at the time the object was first seen. 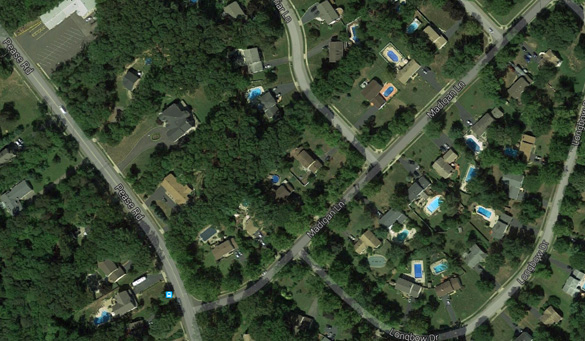 The witness said the object was moving above Madigan Lane from Pease Road, pictured, about 9:50 p.m. on June 22, 2015. (Credit: Google Maps)

“I was leaving and as I was packing my car I thought I saw a bat or bird in the sky from the corner of my eye,” the witness stated. “I turned and looked closer to see this thing flying towards me. As it got closer it got larger in size.”

“It was massive – about 300 feet wide and 400 feet long, extremely dark, black, triangular shape that looked as if it was a shadow because it reflected no light. I could see the shape of this object so clearly, I couldn’t believe what my eyes were really seeing.”

The object had not lights.

“There were no lights anywhere on this flying triangular-shaped object. It was so very dark, scary, and very creepy, like a bat mobile flying over my head. Unreal!” 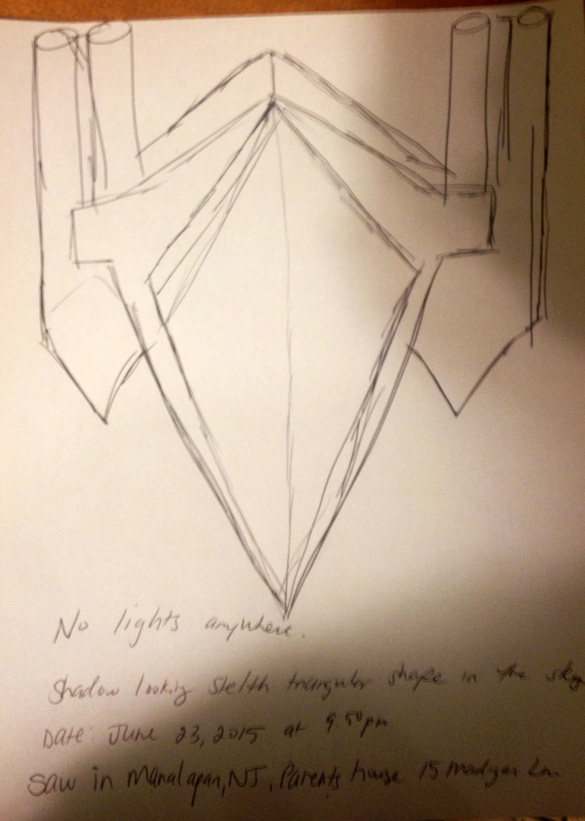 The witness attempted to get an additional witness to the object.

“My dad was coming out of the house and I kept yelling to him to look above over his head. This thing came up Madigan Lane from Pease Road to (northeast) and then hovered over my head for a few seconds and then went southeast towards Longbow Drive over their house. So strange it had no lights and moved so quickly and changed directions on a dime.” 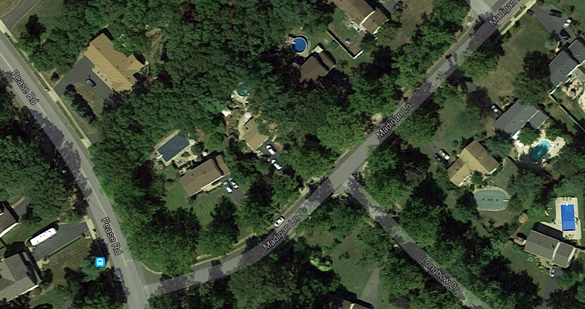 The observed object, according to the witness, was ‘about 300 feet wide and 400 feet long.’ Pictured: Madigan Lane in Manalapan Township, NJ. (Credit: Google Maps)

The witness did provide one sketch of the object, which was reported to MUFON on June 23, 2015.

Manalapan Township is a township in Monmouth County, New Jersey, population 38,872. Please remember that most UFO sightings can be explained as something natural or man-made. The above quotes were edited for clarity. Please report UFO activity to MUFON.com.