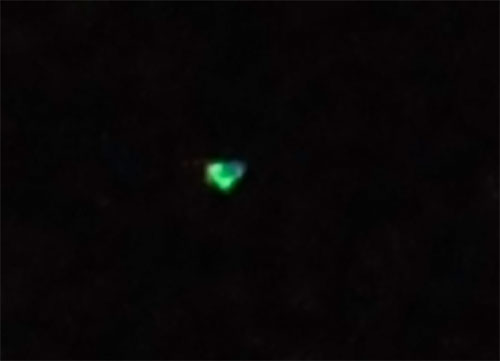 Several witnesses observed an unidentified aerial object in the skies over southwestern Illinois on the night of Tuesday, October 23.

According to the Monroe County Independent, residents of Hecker, IL saw the bright UFO in the sky at approximately 7:00 pm. KPLR News 11 reports that the strange object was seen in both Monroe County and St. Clair County. According to witnesses, the stationary object hovered in the sky and “twinkled” with red, green, blue, and orange light. Some have even said the object was rotating. And according to the local Fox affiliate, KTVI, witnesses also describe the UFO as being larger than a planet, “but it definitely was not the Moon.” Freeburg, IL resident Judy Rachell told KTVI that she and her husband observed this same UFO back in early October. To her, the object looked like “the sun had shrunken down to . . . the size of a soccer ball.”

Monroe and St. Clair County deputies reportedly responded to calls about the UFO. They patrolled the area and established a viewing post in rural Paderborn, IL from which they observed the mysterious object. The UFO appeared to gradually ascend after 8:00 pm, followed by the appearance of a second, similar object. The deputies resumed their normal patrols after determining the UFOs posed no danger.

The Monroe County Independent reports that nearby Scott Air Force Base was contacted about the UFOs, and the base claims it had no aircraft in that area. And although the appearance of a meteor shower and/or solar flare activity was possible that day, the descriptions provided by witnesses don’t match that of meteorites or solar flares.

What do you think these unidentified aerial objects were? Share your thoughts with us by leaving a comment below, or by commenting on the Open Minds Facebook page.