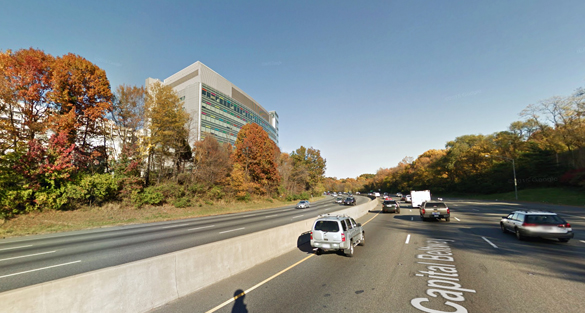 A Maryland witness at Silver Spring reported watching a silent, hovering, triangle-shaped UFO above Holy Cross Hospital about 6 a.m. on March 9, 2016, according to testimony in Case 75115 from the Mutual UFO Network (MUFON) witness reporting database. 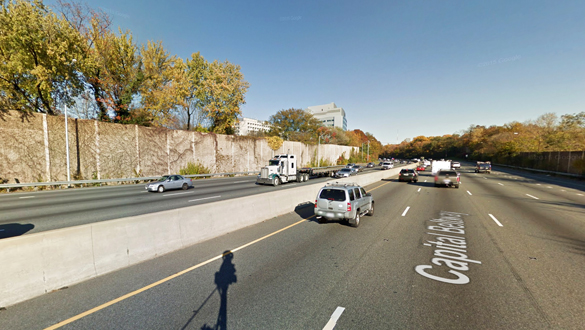 The witness first thought the object might be an airplane’s landing lights while traveling westbound along I-496 near Holy Cross Hospital, pictured. (Credit: Google)

The witness was driving to work westbound along I-495 at the University Boulevard exit when lights were noticed in the sky that appeared at first to be airplane landing lights.

“The lights were extremely bright and arranged left to right with two white lights, one red light in the center followed be two white lights,” the witness stated. “There was a lot of traffic, so I wasn’t moving fast, but I noticed the lights seemed not to move so I thought they could be aircraft warning lights on a crane.” 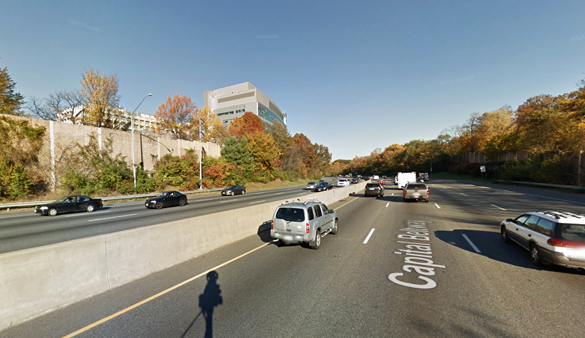 The witness said the lights were hovering over the hospital, pictured. (Credit: Google)

But as the witness drove west past the Colesville Road exit, there was no crane and the lights were observed above the westbound lanes across from Holy Cross Hospital.

“I thought it could be a helicopter landing at the hospital, but I heard no rotors or engines and the lights appeared to be perfectly still. That’s when I had a feeling it could be something else. I cut my radio down and drove directly beneath it.”

The witness described the object while driving underneath it.

“What I saw was a black craft with what appeared to be swept back wings with a tail that had small fins. It was not a helicopter or a blimp and it did not make any noise I could hear or feel any vibrations or see rotors. It appeared perfectly still as I drove under it. I was and still in disbelief. I almost crashed into another car and kept saying out load that I couldn’t be the only one to see that. There was a lot of traffic.” 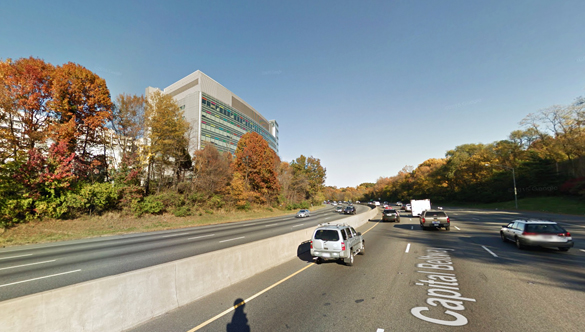 The witness drove directly under the lights and was able to describe the craft. (Credit: Google)

The witness the lost sight of the object.

No photos or videos were included with the report, which was filed on March 10, 2016. Maryland MUFON is investigating. Please remember that most UFO sightings can be explained as something natural or man-made. The above quotes were edited for clarity. Please report UFO activity to MUFON.com.