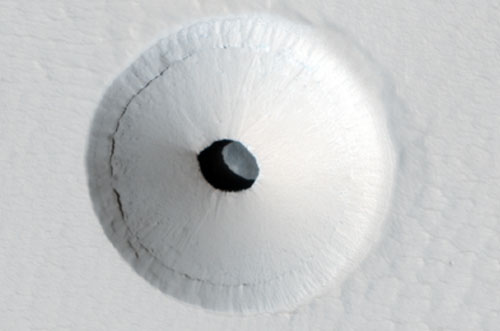 NASA is planning future sample-return missions that would bring rock and soil samples from the Martian surface back to Earth for study. But some scientists say the best samples to bring back from Mars would be those collected from underground caverns.

According to the Cleveland Leader, many researchers believe the Martian surface is “unlikely to host life as we know it today, but organisms could possibly be able to survive in a lava tube” or other underground environments. Lava tubes and other subterranean caverns are common on Mars. But exploring the Martian surface is a difficult task in itself. Exploring below the planet’s surface would be even more difficult.

Astrobiologist and cave scientist Penny Boston from the New Mexico Institute of Mining and Technology, says “While I’m very much interested in a surface sample-return to get us over this hump of doing it, of course I immediately want to go on and start sampling more cryptic materials in lava-tube caves. I would love that.”

In addition to providing clues about past and/or present life below the Martian surface, a robotic mission to explore the Martian underground could provide valuable information that could benefit future manned Mars missions, because lava tubes are likely to be the most promising places to establish human colonies on Mars.

Although scientists aren’t quite ready to send robots into Martian caves, such a mission could be launched in the near future. According to Penny Boston, an underground exploring robot could be ready to launch to Mars by the early 2030s.