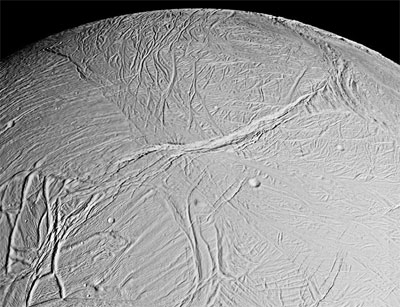 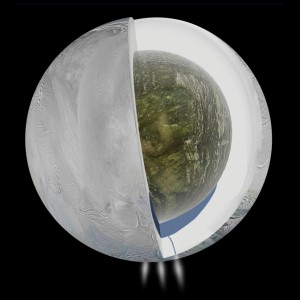 In 2005, NASA’s Cassini spacecraft discovered water-rich plumes erupting from Enceladus’s south pole, leading researchers to believe the moon contained a subsurface ocean. And scientists feel that new data gathered by Cassini confirms this belief. Cassini measured the moon’s gravitational field, and in reviewing this data, scientists determined that Enceladus has more mass at its south pole than is superficially apparent. Scientific American explains, “Because liquid water is denser than ice, a buried ocean could contribute this hidden mass.”

This body of water in the moon’s southern hemisphere is reportedly as large or larger than Lake Superior in the United States, and is located on top of Enceladus’s rocky core at a depth of approximately thirty one miles.

Candice Hansen-Koharcheck, senior scientist with the Planetary Science Institute, told Discovery News, “There have been clues all along . . . But until you actually get this gravity data, it’s still kind of a circumstantial evidence-story. This is proof of the pudding.” 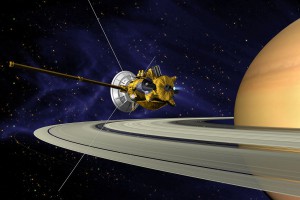 And Scientific American states that the presence of this ocean “boosts Enceladus’s ranking among the top places in the solar system to look for extraterrestrial life.” According to Cornell University planetary scientist Jonathan Lunine, “There are terrestrial organisms that would be perfectly comfortable in that environment . . . It makes the interior of Enceladus potentially a very attractive place to look for life.”

The Cassini spacecraft has three more scheduled targeted flybys of Enceladus to collect more data before it plunges into Saturn’s atmosphere.