Light-balls and other bizarre events in 2013 Dutch crop circles

Shortly after midnight on July 13-14th Robbert van den Broeke “felt” (as he has for the past 19 years now) a new circle was getting ready to form in the village where he grew up.  Robbert now lives in another rural village some distance away, but he recognized the “energy” in his apartment as being related to a new circle coming and, so, drove on his motorbike toward Hoeven.

Suddenly he saw a “star-like” light-ball high in the sky which seemed to be rotating and he stopped to watch it.  As it came toward him it became larger and larger and he could now clearly see that it was a light-ball and about the size of a soccer-ball, still rotating.  When the light-ball was only about 15 meters above him he began to feel dizzy and as if he were losing consciousness–and then felt as if his body was “flying” in the air, weightless (like a feather).

The next thing he remembers is finding himself sitting on the flattened grain in the larger (5.2m x 4.7m) of two small circles.  He tried to stand but couldn’t at first get his legs to work and says he could still see the light-ball, much smaller now, as it rose into the sky and then disappeared. 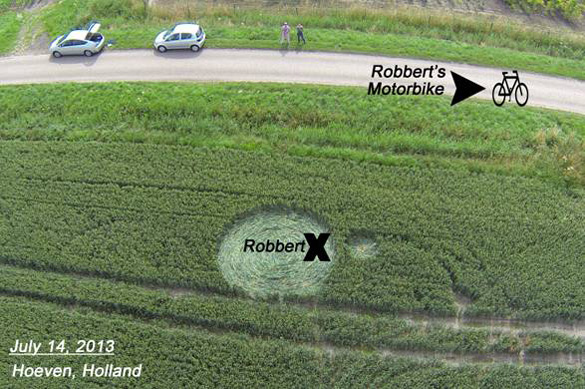 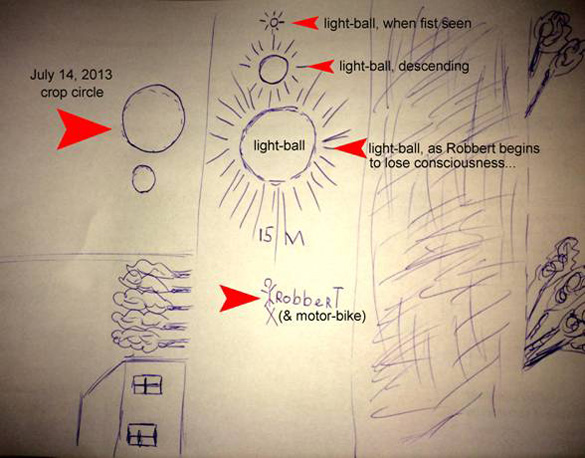 Robbert’s drawing showing the size of the light-ball as he watched it descend, before
he lost consciousness & then “came to” inside the new formation. 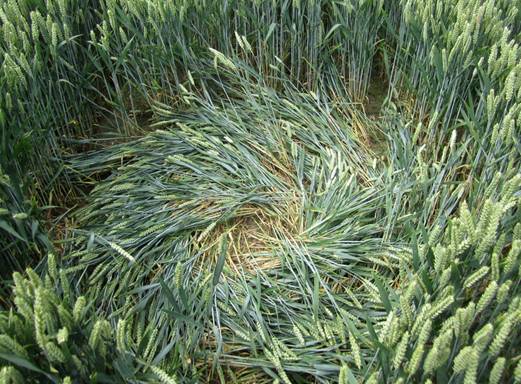 On the night of July 20-21st, one week later exactly, Robbert again felt the strong “knowing” that new circles were getting ready to happen and he and his friend Roy drove back to the Palingstraat near Hoeven where the light-ball had appeared in conjunction with the July 14th circles.  As they drove near the earlier formation both men felt there was something new, farther back in this same field, and as they began to walk down the tram-lines Robbert clearly “saw” (in his “mind’s eye”) a white, misty spiral descend from the sky into the back part of the field and then knew where a new circle would be. 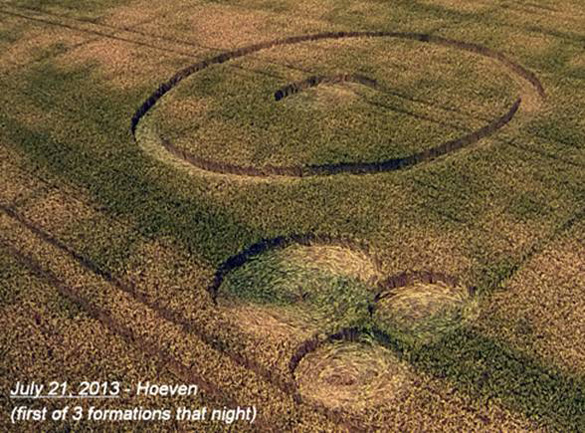 First of 3 new formations found by Robbert & Roy on the night of July 21st—this one in
the same field as the small July 14th circles. Photo: Ronald Sikking

Robbert’s immediate impression regarding this formation was that it contained healing energy (“like the cells in your body can get a make-over”)—that the energy would be felt by many visitors to this circle if the farmer would allow public access. [The kind farmer, who was already allowing access to the July 14th circles did allow public access to this formation also.]

But Robbert also got a second, very strange “message” that, if people would bring apples with them into this ring formation they might find, when they then took the apples home, that very clear dark markings or “symbols” would appear on them.  And, further, that in those cases where this occurred, it would be good for the people to eat these apples, skin and all – that the apples would help promote healing.  [Strange marking have been appearing on applies in Robbert’s parents home, as well as his sister’s, for many years….and the family have noticed no ill effects from eating them.] 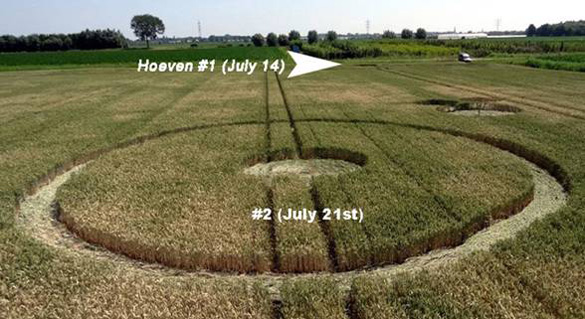 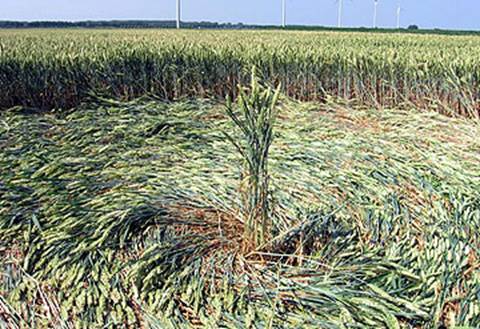 Standing center in one of the three smaller circles in the July 21st
Palingstraat formation. Photo: Roy Boschman

Over several weeks many visitors to this formation did bring apples into it with them…and, just as Robbert had felt, many of these people (most of whom Robbert did not know, but who had read his website) later sent him photos they had taken of their apples which did get strange markings on them when they returned home. 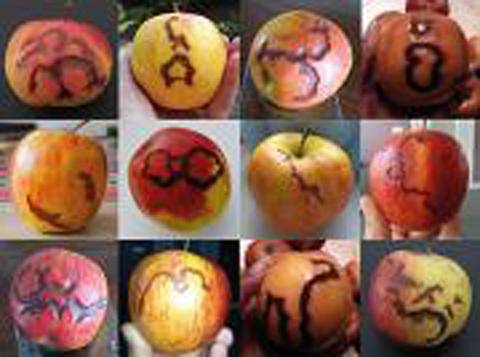 Some of the photos sent in by visitors to this July 21st circle who took apples
into it with them & whose apples later developed these markings. 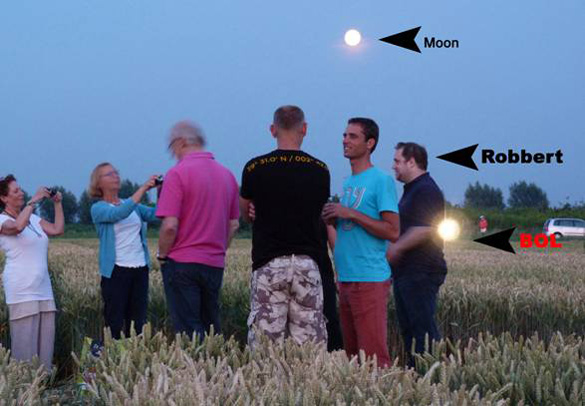 On this same night, while still in the new circle at the Palingstraat near Hoeven, Robbert continued to feel that “more was happening” that night.  This time in his “mind’s eye” he saw a field at Standdaarbuiten where many circles have appeared in the past and where, in particular, a beautiful cross had formed in July, 2010.  He and Roy left the Hoeven area and then drove to the Standdaarbuiten field where they immediately found a 15m diameter circle with four smaller “satellite” circles attached, and with three other smaller circles grouped nearby. 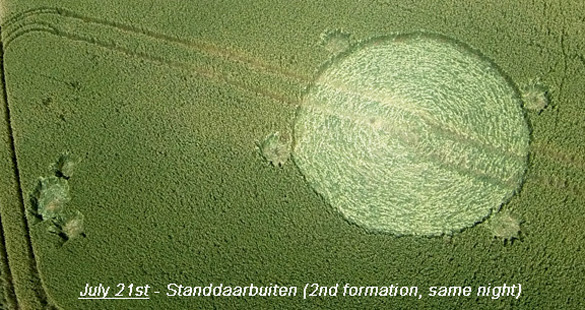 Second crop circle found the night of July 21, 2013—this one miles away from the first.
Photo: Ronald Sikking 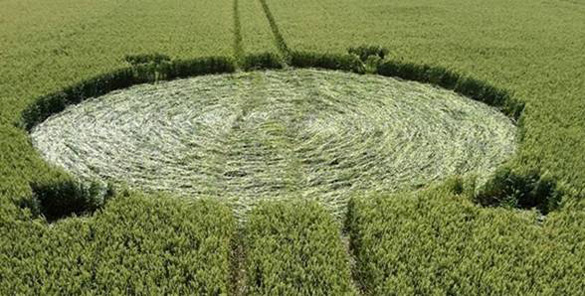 All of the small circles in this formation had “Dragon’s Feet” (edges which were are splayed out or ratcheted into the standing crop)–something seen frequently years ago in the UK, but not found often in Holland. 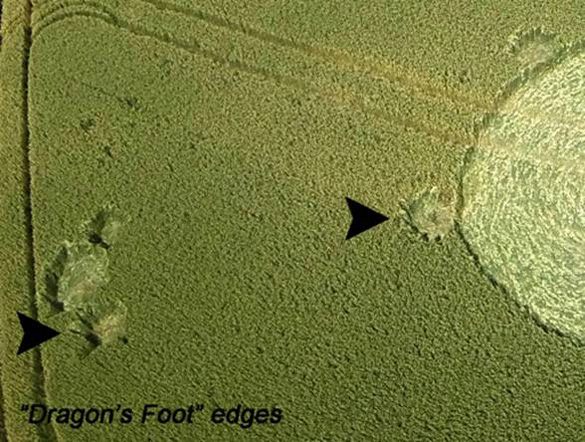 “Dragon’s Foot” edges around ALL small circles in this formation.
Photo: Ronald Sikking 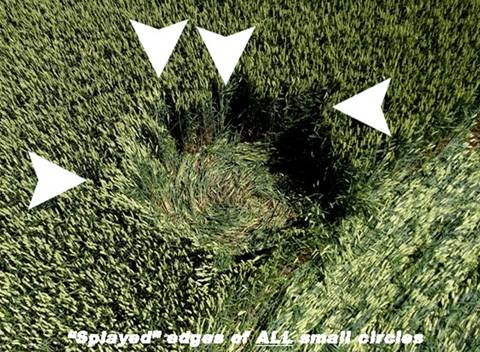 At around 1:30 am, while Robbert and Roy were still in the Standdaarbuiten crop circle, Robbert got the feeling that they should drive back toward the outskirts of Hoeven, along the road where the gas station is located.  As they came closer to Hoeven Robbert saw clearly—and this time visually—a “whitish mist” circling down low over the field just before the gas station and, because of the bright full moon, both men could easily see this third new formation, close to the road. 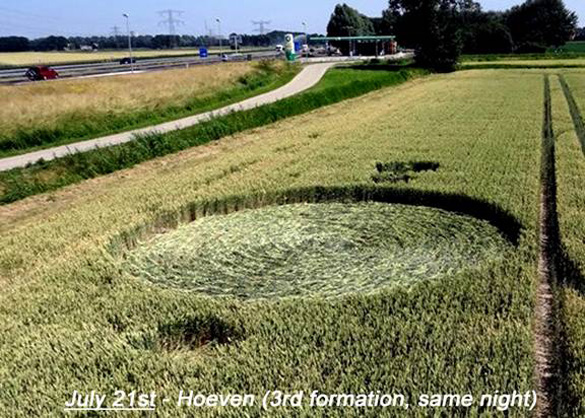 July 21, 2013 – 3rd formation found by Robbert and Roy this night, the first time that
3 different crop circles have appeared in Holland on the same night.
Photos: Roy Boschman 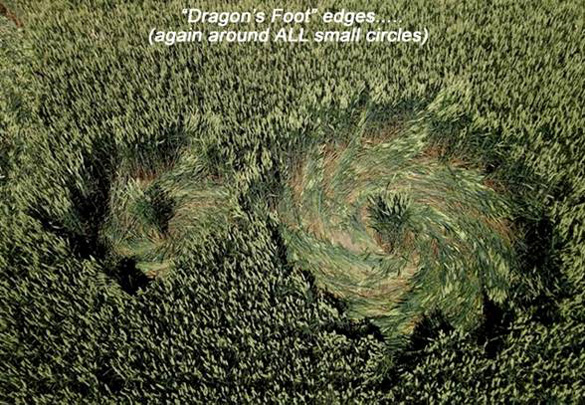 Again, in this 3rd July 21st formation, all of the smaller circles had “Dragon’s Foot” edges.
Photo: Roy Boschman

Circles have been appearing in Robbert’s area of southern Holland since he was 14 years old (he’s now 33) and in many cases he has visually seen them form.  In one of those instances I was with Robbert in Holland and, so, we both saw brilliant light tubes shoot down (http://www.bltresearch.com/eyewitness/eyewitness1.php) behind his house, apparently creating the large elllipse with “T-shaped” pathway which we then found immediately afterward that night in 2001.

Then in 2006 we were together again, up on a dike next to Robbert’s “special” field when Robbert suddenly grabbed my arm and pointed out into a field we had just left (http://www.bltresearch.com/eyewitness/eyewitness4.php) yelling “see, see… do you see that dark spiral?”  Robbert’s eyes are younger than mine and all I saw was a dark movement down low over the field—but we were only 30-40 ft. away and went back down into the field immediately and found the new circles.

Robbert has seen more than 100 circles form over the years, in daytime and at night, with a wide variety of attendant light phenomena.  In a few cases he has seen what appeared to be actual “hard-bodied,” solid-looking UFOs creating the circles.  And I am not the only other eyewitness to these and other astounding events (English reports, bottom of pg: http://www.bltresearch.com/robbert.php).

To see more photos of these (and other) 2013 Dutch circles go to Robbert’s crop circle archive page:  http://www.robbertvandenbroeke.nl/graancirkelarchief.  To follow other amazing on-going events around Robbert check his website regularly.

(http://www.robbertvandenbroeke.nl/home).  I will also post a complete “2013 Dutch Overview” report on Robbert’s BLT page, with many more details, shortly.

Posted on OpenMinds.tv with permission.