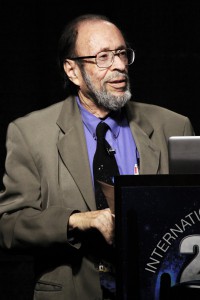 His interest in extraterrestrial-related phenomena emerged in his early childhood. His desire to find answers related to this enigmatic subject spawned a quest lasting nearly twenty years. Dr. Leir, a Podiatric Surgeon, maintained a private practice in Ventura County, California for more than forty years. He became fascinated with alleged alien implants after removing a foreign object from a patient’s foot in 1995. He formed a non-profit organization called A & S Research Inc. to investigate these anomalous objects. He and his surgical team performed fifteen surgeries on alleged alien abductees, resulting in the removal of sixteen objects they believe are alien implants.

These objects have been scientifically investigated by some of the most prestigious laboratories in the world including Los Alamos National Labs, New Mexico Tech, Seal Laboratories, Southwest Labs, the University of Toronto, York University, and the University of California at San Diego. Their findings have been baffling and some comparisons have been made to Meteorite Samples. In addition some of the tests show metallurgical anomalies such as highly Magnetic Iron that is without crystalline form, combinations of crystalline materials mixed common metals, growth of biological tissue into or out of metallic substances, as well as isotopic ratios not of this world.

Dr. Leir also researched UFO cases, including the 1996 Varginha, Brazil case in which an extraterrestrial was reportedly seen by multiple witnesses and captured by the military, and the 2007-2009 UFO sightings in Kumburgaz, Turkey. He also authored several UFO/ET-related books.

Several witnesses presented testimony to a panel of former congress members at the National Press Club in Washington, DC at a 2013 event titled the Citizen Hearing on Disclosure. Dr. Leir was among the witnesses.

Dr. Leir had struggled with various health issues in recent years. He reportedly had been suffering from a debilitating case of shingles, leading to serious infections in his leg and foot. These issues were aggravated by diabetes. A fundraiser for Dr. Leir was held in 2012 at a Mutual UFO Network (MUFON) Los Angeles meeting to help pay his substantial medical bills.

The official cause of death is still unclear. According to paranormal researcher Christopher O’Brien, Dr. Leir was in the hospital on March 14 awaiting surgery on his own foot that had been injured in a 2010 car accident. He reportedly left to use the restroom, but never came out.

A post from March 15 on the A & S Research website simply states, “Today is a sad day to report the passing of Dr. Roger K. Leir, we have lost a great family man, podiatrist and devoted ufologist. He will be greatly missed by all.”