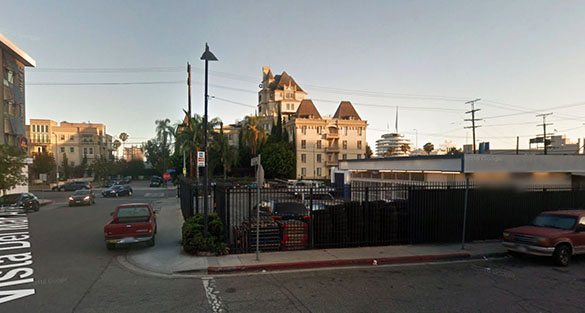 A California witness at Hollywood reported watching a “large UFO” moving over the Hollywood Bowl-101 Freeway area, according to testimony in Case 80813 from the Mutual UFO Network (MUFON) witness reporting database.

“I was in downtown old Hollywood area near 101 Freeway and Franklin junction,” the witness stated.“I pulled my car into the 101 Cafe on Franklin Blvd.into the back parking lot which has a 30-degree and up view of a clear night sky with a west, north, and east. As I parked my car I quickly sighted a large blue-white object in the northwest sky about 35 degrees up from horizon through my wind shield.” 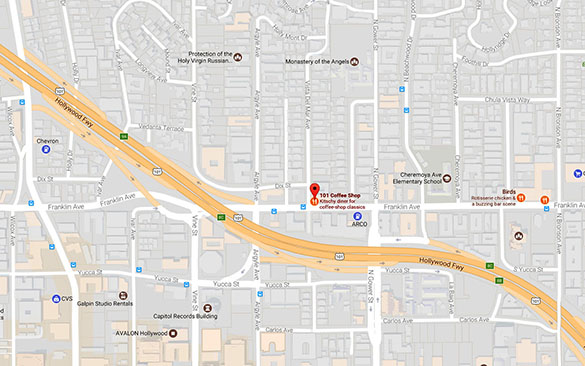 The witness quickly moved into position to investigate.

“My iPhone read 2:17 a.m. Instantly I jumped out to investigate and questioned to my partner what was in the sky. At the same time, as I spoke this question, a female witness at her car behind us joined in with us to question the same object as she just had spotted it as well. Northwest-west toward the Hollywood Bowl in the Hollywood Hills – Mullholand Drive region an object was gracefully flying over those hills which was a clear mile distance from us.”

“The object was flat. Its underbelly was a soft, radiant, blue-white light in a honey-combed patterned shape. Very faint aura around the object. The object’s speed resembled the grace of a blimp, very directional and straight, yet very gradual and slow in shift of direction overall through the experience. The object was heading east towards us and its speed was cruising, causal, slow, yet the light detail resembled a superstructure in a blue-white, honey-combed pattern that was entirely luminous. NO landing lights, no blinking lights, no conventional aircraft resemblance. This was a solid, luminous shape that did not pulsate or change intensity in lumination or brightness. It moved gracefully without abrupt turns. Just smooth, clearly indicating behavior of a large craft, like an aircraft carrier or blimp would, and like these examples, one realized it gained distance in a short amount of time.”

The group tried to decide exactly what the object was.

“We were now three witnesses trying to identify the craft. We quickly agreed the craft was not anything we were ever familiar with, as we all have much flying experience. I am a drone owner as well, and this was not the behavior of a drone with zigzag action or its type of lights. About a minute of observation, we agreed the craft with this behavior easily was in the measurement of 100 feet across at least as it dwarfed the structures below on the hills at an 1500-2000 feet elevation above the hills.” 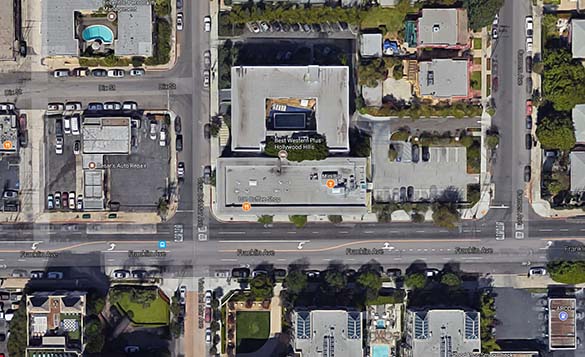 There was a faint aura around the object and its speed resembled the grace of a blimp. (Credit: Google)

“Slowly and gradually the craft turned easily northeast and gradually gaining altitude as it flew over the 101 FYW Cahuenga Pass. About after another minute it was clear the craft was gracefully gaining extreme altitude, and due to elevation, its craft detail was getting smaller as it finally settled over the Hollywood sign mountain. The craft peaked about 5,000feet above the mountain and paused its northeastdirection. It hovered still perfectly without a bump for about another minute. Through this time again the craft was gaining more altitude.”

The witnesses watched the object climb.

“About another 30 seconds of this slow climb, the craft slowly flew southward to our direction. The honey-combed lit pattern was so tiny from its height, yet still identifiable. Its movement and behavior resembled that of high space satellite. The craft eventually was now spotted by two more witnesses as they were entering the cafe, as we were all in agreement of tracking the craft. The slow path and ascension ended directly above us about 7000-8000feet as it hovered in place for another five minutes. As the craft paused, to our view it parked itself near two stars creating an even triangle constellation of sorts. These two stars’ location are the first pair northeast of the Orion left shoulder.”

The craft then gained altitude again.

“After this pause the craft gained an altitude to where it now resembled that of a tiny satellite, or the size of the neighboring stars, and like a slow satellite, it traveled directly west over West Hollywood as its slow path was just north of the Orion constellation. The object was exactly star size as it faded westward gaining altitude, yet still identifiable well past west of Hollywood Blvd and Fairfax.”

The witness tried to report the incident.

“The entire event was about 27 minutes as it was slow and gradual as stated before. I then cell phoned the West Hollywood Sheriff to report the sighting and the officer stated there were no reports of the event. I then contacted the next major airport at Burbank which was about 12 miles away. By this hour, the airport has stopped its regular commercial airline service at 10 p.m. I got through to Burbank tower security who accepted my story and he then transferred me to the actual tower. A stand-by night watch tech took my call. I asked if anyone was watching radar in the south direction of 2:17a.m. He stated he wasn’t watching radar at that time. I described my sighting to him; he sounded interested, but after he claimed he still never had evidence on radar, nor looked, therefore he stated he had to go and hung up on me.” 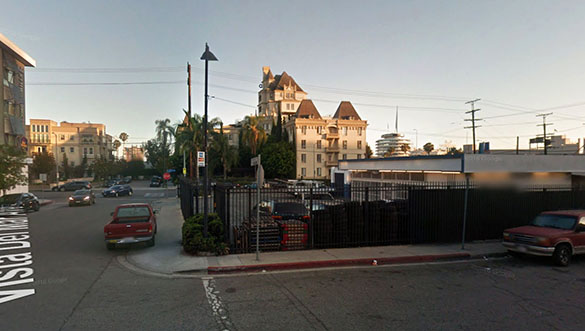 The witness pulled into a local diner parking lot for a closer look. (Credit: Google)

The witness compared the object to known objects.

“This craft had no similarity to the usual police helicopters or commercial aircraft that we see by the dozens daily in the area with our three major commercial airports. We do have Edwards AFB but it’s a two-hour drive north. But this was no Stealth plane outline nor was it the dark large Air Force X-Balloon triangle ship. We haven’t had lighted blimps in years since Goodyear stopped that action, nor could a blimp fly that height out of sight or hover in place. It was not a large manned drone, as it would have been way too small in dimension; also the guide lights on a drone were not the same. Nor could a drone have scaled that altitude for that duration and without one single abrupt zigzag kind of movement. Our sighting was a big luminous craft, with smooth acceleration, ending in high altitude without a flinch. Lots of citizens in LA; please respond if there are any other eyewitnesses.”

MUFON California Field Investigator Earl Gray Anderson is investigating. Please remember that most UFO sightings can be explained as something natural or man-made. The above quotes were edited for clarity. Please report UFO activity to MUFON.com.