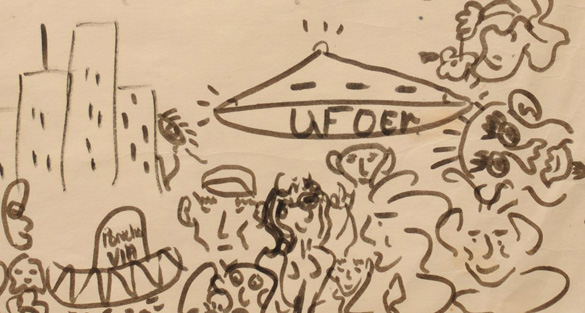 A doodle of a UFO made by John Lennon in 1974 was auctioned off last week and it went for nearly 10 times more than expected. The UFO drawing by Lennon fits the description of a UFO he says he saw in New York with his then girlfriend May Pang that same year.

Lennon’s UFO sighting is legendary in UFO lore. It took place in New York, during his self described “Lost Weekend,” which was actually not a weekend at all. This was the period from the summer of 1973 to early 1975, which he spent with Pang and separated from his wife Yoko Ono. 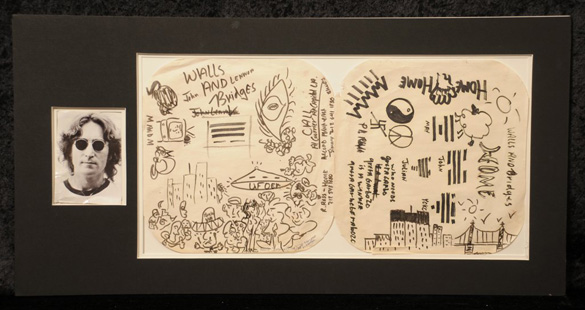 During that time Lennon completed several albums, including “Walls and Bridges.” It is a on an acetate album sleeve for “Walls and Bridges” that Lennon doodled, among other things, a UFO with the letters “UFOer” written on it. The sleeve, along with more of Lennon’s original artwork is on display this month. The sleeve was auctioned this past Friday, March 21. It was expected to fetch between £1,000 and £1,500 (around $1600 to $2500), but in the end it went for £10,000 (currently $16,530). 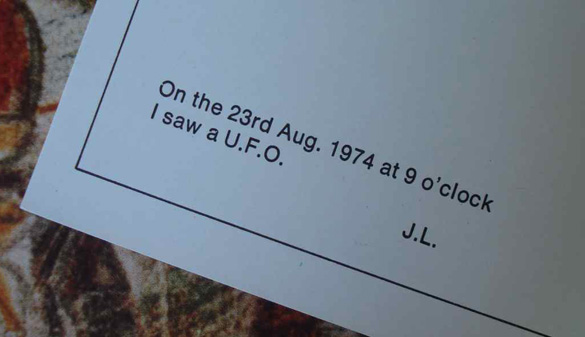 This note is a reference to Lennon’s UFO sighting. He says that the sighting took place at his apartment on 52nd street in New York City. He says it was a clear summer night when he spotted the object hovering only 100 yards away. He said in a radio interview, “I could have hit it with a brick if I would have thrown a stone at it.” 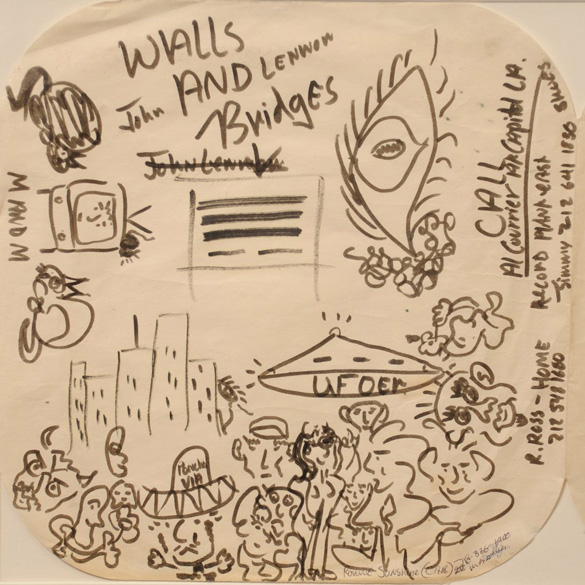 UFO side of the album sleeve doodles. (Credit: liveauctioneers.com)

He says the object was round, and “around the bottom was ordinary looking electric light bulbs blinking on and off alternatively like on a billboard or something. On the top of it was a red light. The thing I noticed was that there was no noise, and I could hear the freeway down below – all of the cars going.”

He says he knew it wasn’t a helicopter because it made no noise. His next thought was that it was perhaps a balloon, but he felt it was too close to the rooftops and “maneuvered too well” to be a balloon. He said the object was there for 5 to 10 minutes before it moved away along the east river.

Pang was also present during the sighting and wrote about it in her book Loving John. She says, “I had just stepped out of the shower one Friday night toward the end of August when I heard John shout. ‘Fung Yee, come here!’”

She says he sounded panicked, so she ran outside to find out what was going on. She says Lennon pointed to the sky and said, “Look up there. Tell me what you see.”

She was “astonished” to see “a saucer shaped object surrounded by blinking white lights gliding through the sky.”

She said she was not really into the topic of UFOs, but that Lennon was. He even subscribed to a British UFO journal called the Flying Saucer Review. However, she was convinced that what she was looking at was a UFO.

She then began laughing. Confused, Lennon asked what she was laughing about. Pang says she laughed because they were both naked. She told him, “Suppose it’s looking at us. Maybe they think that everyone who lives on the East Side wanders around naked on their balconies on Friday evenings. We look like Adam and Eve.” 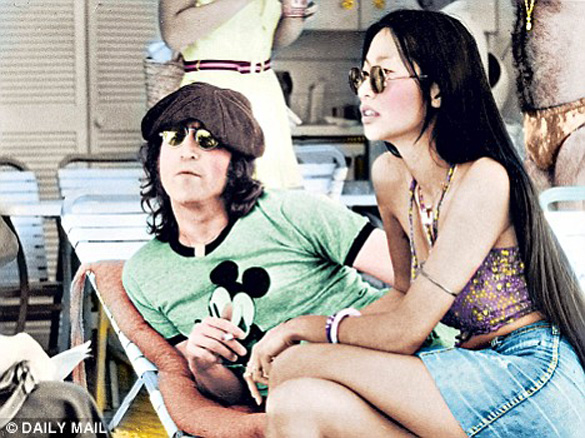 Pang says they then went inside to see if they could get a better look at the UFO on their telescope.

Although Pang had been skeptical of UFOs, she said after the sighting, “Now I’ve seen it I do believe it.”

Even though Lennon, according to Pang’s account, was excited during the sighting, he says in the 1984 song Nobody Told Me, “There’s UFOs over New York and I ain’t too surprised.”

Lennon may not have found UFOs over New York very surprising, but the auctioneers must have been surprised at the price his UFO doodle fetched. Being a John Lennon fan, and an obvious UFO enthusiast, I personally find the doodle and the story of his sighting to be priceless.