Italy’s first woman in space can be heard calling out in shock at something she saw during the docking operation of the Soyuz spacecraft she was aboard and the International Space Station (ISS). Video of the docking operation shows a small white dot floating across the screen a few minutes prior to her exclaiming her shock, leading  some to speculate that she was shocked at the sight of a UFO. Italian news agencies have been reporting on the incident, asking, “Did she see a UFO?” 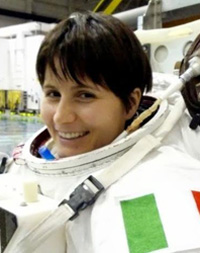 European Space Agency (ESA) Astronaut Samantha Cristoforetti is a Captain in the Italian Air Force where she was a pilot and engineer before she was chosen to be an astronaut and Italy’s first woman in space. She is currently taking part in a long duration mission aboard the ISS.

Cristoforetti’s Soyuz capsule launched from the Baikonur Cosmodrome in Kazakhstan in the early morning of November 24, 2014. The capsule carried three astronauts, including Russian Anton Shkaplerov and NASA’s Terry Virts.

The docking operation can be seen in a video on YouTube posted by the European Space Agency (seen above). In it, you can see black and white video from the point of view of the capsule as it approaches the ISS. A little more than a minute into the YouTube video, a faint small dot can be seen crossing the screen. It makes no strange movement.

A few minutes later, at about the four and a half minute mark, Cristoforetti can be heard sounding shocked and amazed. Her Russian colleague, Shkaplerov, can also be heard saying, “tiho, tiho, tiho,” which in Russian means, “calm, calm, calm.” 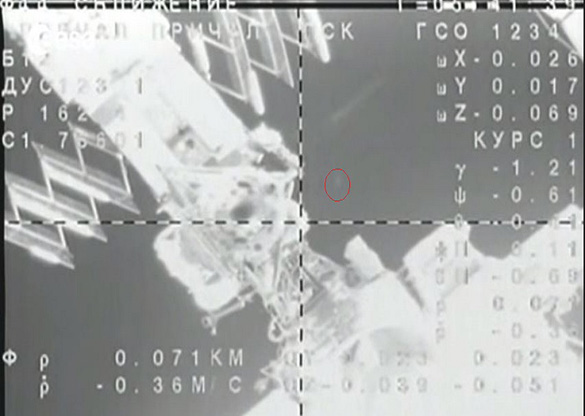 I had released my shoulder straps quite a bit at that point, so I was floating over my seat. As I turned to look outside, at first I looked back and saw one of our Soyuz solar panels, which I had seen before of course. Then my eyes caught something in the peripheral view. And as I slowly turned my gaze and when I realized what I was seeing, I was overcome by pure amazement and joy:  the Space Station was there, but not just any view. The huge solar panels were flooded in a blaze of orange light, vivid, warm almost alien. I couldn’t help exclaiming something aloud, which you can probably hear in the recordings of our docking, since at that point we were “hot mic”  with Mission Control. Anton reminded me of that and so I tried to contain my amazement and return to the docking monitoring. When I peaked again later, the orange glow was gone.

Butch told me later that he had heard my amazement on com when  “the Station had turned orange.”  I didn’t know, but apparently there’s only a few seconds during day-night transition that the Station is lit by that amazing orange glow. And it happened to be exactly when I peaked outside!  I feel very fortunate that I had such a unique first glimpse of our human outpost in space: such a great welcome! 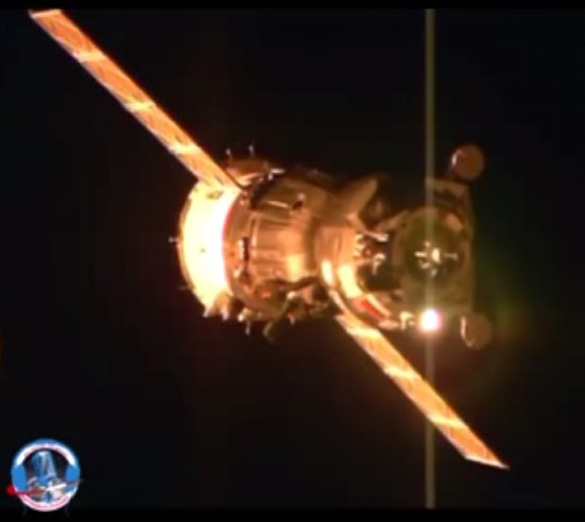 Image from the ISS of the orange glow described by Cristoforetti. (Credit: ESA/Today.it)

In an OpenMinds.tv interview with astronaut Michael Massimino, he explained the experience of being overwhelmed by the sights in space: “You are prepared to do your job, but you are not prepared for the view around you. You know, what you see around you is just so magnificent it just kind of blows your mind, and the view of the earth is just incredible.”

That sense of awe and wonder was certainly heard in the shout by Cristoforetti.

She makes no mention of the white dot that is seen earlier in the video, and it is likely that it is debris that is floating around the space station. This debris is often mistaken for UFOs by earth bound YouTube viewers.