Some scientists believe red rain that fell in India is proof of extraterrestrial life. 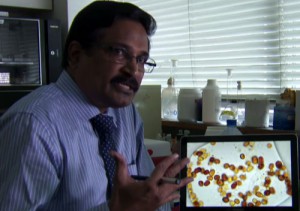 The Huffington Post explains that, “Between July 25 and September 23, 2001, the Indian state of Kerala was drenched by bizarre red-colored rain unlike any seen previously.” Kerala-based physicist Godfrey Louis analyzed the rain water, and to his amazement, the particles appeared to be alive. Louis believes the particles are extraterrestrial spores that were hitching a ride on a meteorite that exploded over Kerala before the red rainstorm. This theory is supported by the fact that, according to Louis’ research, these extremophiles are able to continue replicating at temperatures exceeding 572 degrees Fahrenheit.

According to the Huffington Post, professor Chandra Wickramasinghe believes the “alien rain” theory is “not only plausible, but likely.” In an upcoming episode of The Unexplained Files, Wickramasinghe opines, “The existence of life outside the Earth is amazingly regarded as an extraordinary hypothesis, but I would argue that the extraordinary hypothesis is that this tiny minute piece of dust we call the Earth is the center of life in the universe and that no life exists even next door to it.”

The “alien rain” episode of The Unexplained Files airs on Wednesday, September 25 on the Science Channel.