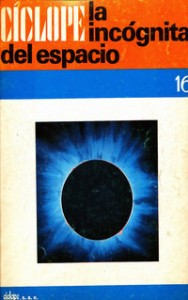 In May 2010, a blogger with eltiempo.com, Colombia’s leading newspaper, posted an interview with world renowned author Gabriel García Márquez about the UFO subject. Author of the hugely popular One Hundred Years of Solitude and many other novels, García Márquez is one of the world’s most prominent literary figures and winner of the Nobel Prize in Literature in 1982. The interview posted in eltiempo.com was picked up quickly by dozens of other Spanish language websites throughout Latin America, but it soon transpired that this was not a new interview, but an old one done by the Spanish publication Cíclope back in 1969, which I recalled buying in Buenos Aires during a trip in the 1980s and which I was able to find in my files.

Cíclope published in the late 60s a newsstand encyclopedia in 45 installments called “la incógnita del espacio” (The Enigma of Space), which covered the space race, life in other planets and ufology. Among its editors were the Spanish UFO experts Antonio Ribera, Eugenio Danyans and Mario Lleget. Issue Nº 16, “La gente opina” (People’s Opinions) included a number a short interviews about UFOs with both regular folks and cultural figures like writers, art critics, movie directors, etc. Most of these people like Terenci Moix, Joaquín Jordá, Mario Gas Cabré, etc., are virtually forgotten now, but one of them, the Colombian writer Gabriel García Márquez, went on to become one of the world’s leading authors.

García Márquez was born in 1927 in the remote town of Aracataca in Colombia’s tropical Department of Magdalena. The rich geography and folklore of his hometown would later inspire much of his mythical town Macondo. While studying law at the University of Cartagena in the late 1940s, García Márquez became a journalist, a profession he continued to exercise for many years. 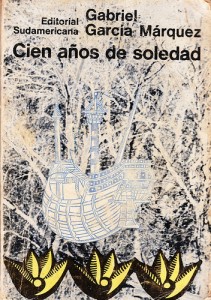 In the early 60s he began to publish short stories, leading eventually to his phenomenal literary bestseller One Hundred Years of Solitude, published originally in 1967, and followed by other acclaimed novels like The Autumn of the Patriarch, Love in the Time of Cholera and The General in His Labyrinth. García Márquez was a master of the literary school known as “magical realism” which was very popular in Latin America in the second half of the 20th century.

“My most important problem was to destroy the demarcation line which separates what looks real and what looks fantastic,” he explained once, “because in the world that I was trying to evoke that barrier didn’t exist.” The Swedish Academy awarded him the Nobel Prize in Literature in 1982, “for his novels and short stories, in which the fantastic and the realistic are combined in a richly composed world of imagination, reflecting a continent’s life and conflicts.” In a way it’s not surprising that the Colombia author would have an open mind about UFOs and other paranormal subjects, some of which are weaved in the rich fabric of his literary creations. I remember reading long ago one his newspaper columns in the Colombian newspaper El Espectador, which dealt with phantom hitchhikers.

As far as I know, the interview with García Márquez done by Cíclope has never been translated to English until now. We also reproduce the original in Spanish just as it was published in 1969. While some of it is perhaps a bit tongue in cheek, other ideas come across quite clearly. García Márquez believes that UFOs are “craft from other planets” and that “luminous discs” have been coming to Earth since Biblical times. He also believes that science should be more “clairvoyant” like alchemy used to be and less reactionary and dogmatic. 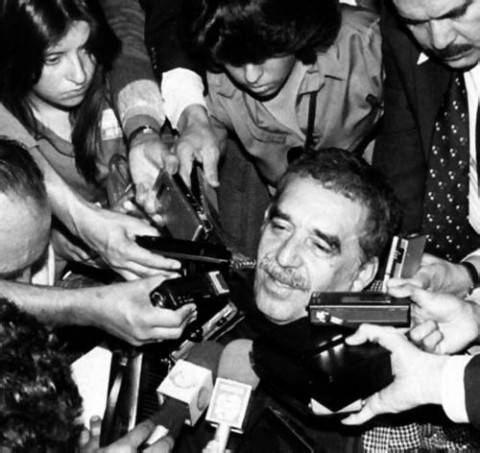 Translation of the Cíclope interview

Gabriel García Márquez. Born in Colombia. Won the Nobel Prize in Literature. Writer. His book One Hundred Years of Solitude became one of resounding world successes in recent years.

Q: What is your opinion about UFOs?

A: My opinion about UFOs is of common sense: I believe they are craft from other planets, but whose destination is not Earth.

Q: Do you believe in the existence of life in other planets?

A: The arrogance of those who assert that ours is the only inhabited planet is touching. I think that rather we are something like a lost village in the least interesting province of the Universe, and that the luminous discs that are passing in the night of the centuries are looking at us like we look at chickens.

Q: From where do you believe they come or who is directing them?

A: The UFOs must be manned by beings whose biological cycle is considerably wider and fruitful than ours. They are not concerned with us because they finished studying us thousands of years ago, when they conducted their last explorations of the Universe, and they not only know much more about us than ourselves, but they know even our destiny. In reality, the Earth must be for them like an emergency island in the hazards of space navigation. 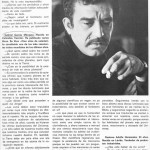 Q: Do you think that the public is properly informed about this subject?

A: I don’t believe there is a conspiracy by the great powers to hide the truth about UFOs from us. That would attribute the owners of the world more intelligence than what they have.

Q: To what you attribute the persistence of some scientists to deny not only the possibility that extraterrestrial spacecraft could exist, but the [UFO] phenomenon itself?

A: What happens is that humanity wasn’t able to merit the wisdom of the alchemist, who considered the laboratory like a simple kitchen for clairvoyance, and now we are at the mercy of a reactionary science whose coarse dogmatism cannot admit any evidence that it doesn’t have inside a jar. They are regressive scientists who deny the existence of Martians because they cannot see them, without even asking themselves if the Martians could be the microbes which make war to us inside our bodies.

So long as science is experimental—and not clairvoyant as was alchemy and which in our times only poetry can be—humanity will continue to be part of the kingdom of the barnacles. We will continue to see with an open mouth those luminous discs which were already familiar in the night of the Bible, and we will continue to deny their existence if their crew sit down to have lunch with us, as it occurred so many times in the past, because we are the inhabitants of the most provincial, reactionary and backwards planet in the Universe.