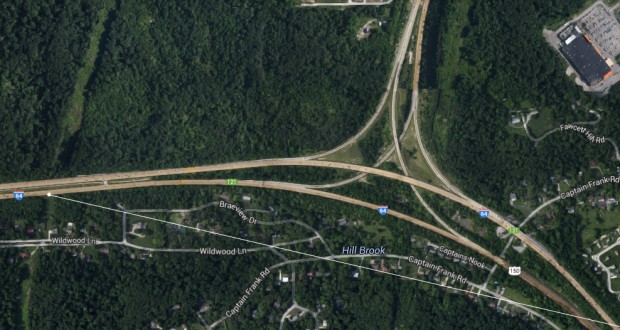 The witness turned onto northbound I-64, and saw the object move toward Edwardsville. But it eventually seemed to slow down and turn toward Georgetown. (Credit: Google)

An Indiana witness at New Albany reported watching and following a bright light UFO that appeared to get the attention of ground responders in all-terrain vehicles about 5:30 p.m. on December 22, 2014, according to testimony in Case 62108 from the Mutual UFO Network (MUFON) witness reporting database.

The witness was heading home at 5:30 p.m. along westbound I-265 about two miles from the intersection with I-64 when the object was first seen. 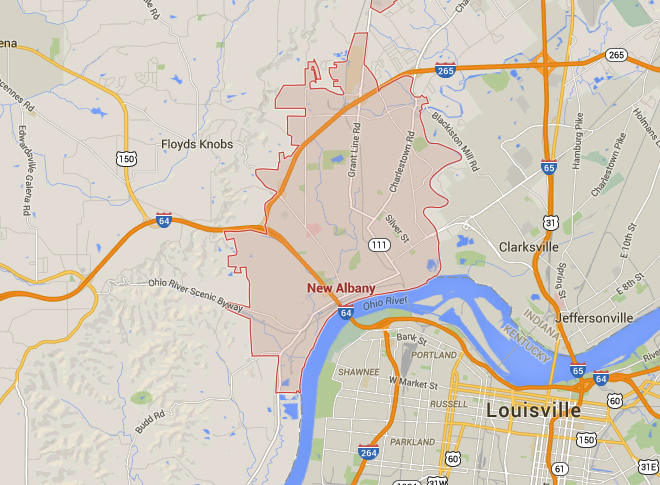 The witness was driving westbound along I-265 about two miles from the intersection with I-64 when the object was first seen. (Credit: Google)

“As I was approaching the interchange, I saw a bright light hovering or moving slowly in the distance,” the witness stated. “Although it was beginning to get dark, there was plenty of late, bright sunshine. The only clouds were much higher than the object.”

“The object had a luminous trail behind it of about 20-50 feet. When it eventually passed through some small clouds I could still see the light it generated. As I began heading north up I-64, the object moved toward Edwardsville. I was driving 45-50 mph and it was parallel to me.”

But then the object appeared to slow down and began moving toward Georgetown.

“In 20-30 seconds it gradually faded to nothing, while still moving.”

About this time, the witness began to hear sirens.

“I entered onto SR 62 and first responder vehicles were arriving from both directions and shut down the road. Twice I saw a first responder run across the road, up an embankment and into the area of an abandoned golf course. To me, they were looking for something.”

Then the witness and two other vehicles were allowed to proceed.

“What was surprising to me, was that the vehicles looked like fire trucks, but were more like large, all-terrain vehicles. Also, when I passed this pass-through area, there was no auto accident scene, no sign of fire, nor injured parties. Also no ambulance or stretchers. No police were there. This was just a few minutes after the object slowly disappeared/faded out.” 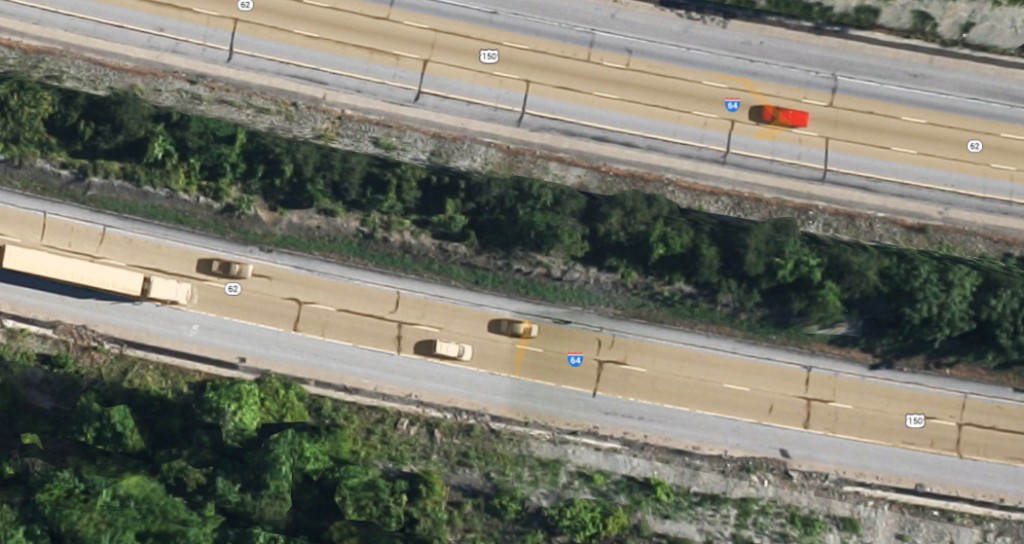 The witness entered onto SR 62 and saw first responder vehicles arriving from both directions and they quickly shut down the road. Twice the witness saw a first responder run across the road, up an embankment and into the area of an abandoned golf course. (Credit: Google)

New Albany is a city in Floyd County, Indiana, population 36,372.

Indiana has a current UFO Alert Rating of 5 with a low number of recent reports nationally. Indiana had 7 UFO reports that occurred during November 2014 – calculated at 1.07 sightings per million population.