On July 17, 2014, local news reporters covering a wildfire inadvertently got more than they were looking for. Thirty-seven seconds into their news report they show a clip of a water tanker dropping fire retardant, and above the mountain an object can be seen shooting out of the clouds across the sky. The video changes to another clip before the object can be seen leaving the field of view of the camera.

The original news report can be seen below. An enhanced version of the UFO can be seen above.

The video was captured by the website Castanet.net, a news site that covers Western Canada. They recently posted an article about the attention the UFO is getting in their video. In it they say the original witness reported:

Shot out from the clouds above the mountain during a forest fire near our nieghbourhood. It pulled a wisp of cloud with it as it exited.

A forest fire broke out on the mountain behind us and during the attempt to put it out, this event took place.

I was watching a video online of the fire from a little earlier in the day and i spotted the UFO 37 seconds into the video. I have no idea whether anyone else has noticed this or not. Most folks would be focused on the fire.

37 seconds into the video the UFO comes shooting out from a cloud right above the mountain and passes through a clear spot back into the next cloud. I was quite startled and surprised when i saw it.

The UFO left a thin trail of cloud vaper as it exited the cloud. This, to me, eliminates any thought that this might be a camera lens artifact or light phenomenon effect.

The event lasted only a couple seconds. Judging by the distance i was from the object it had to have been moving very fast. The scene cuts away while the UFO is still visible. I’m left to assume that there must be more footage of it than i saw (sic).

I phoned the website’s news department to ask if it would be possible to see the full footage, but was met with disapproval. In retrospect, perhaps i shouldn’t have mentioned the word UFO. (lol)

The fire was near West Kelowna, about 225 miles northeast of Vancouver. Castanet News did not any offer any suggestions as to what it was they caught on video. However, people have suggested that it could be a bolide. A bolide is another term for a bright fireball or meteor. 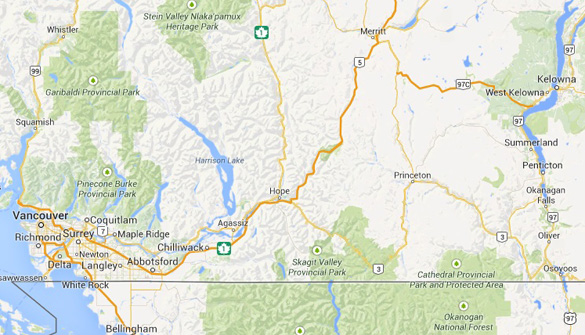 Whatever it is, the imagery is incredible. The object clearly passes through the clouds and leaves a trail as it punches through the clouds. It is moving quick and horizontally. It doesn’t appear to maneuver, making it more difficult to rule out a bolide. However, it is very bright and large. We have found no reports of a meteorite landing in the area. Although, it is a remote area.

We have sent the video out to be reviewed by experts and will provide updates as we get them.

We reached out to MUFON’s chief photo and video analyst Marc D’Antonio, who sent us the following analysis:

I am convinced that this was a really good find. It is an Earth-grazer, a meteor that approaches the atmosphere at a shallow angle, and continues on, skipping off the atmosphere back into space. Some of them will slow down enough to become trapped and fall to Earth but they many times just skip on off and keep going. This one does indeed show a vapor trail as it moves through, it DOES come out from behind the cloud, and it moves at a speed completely consistent with Earth-grazers.

He also included a video of a similar abject captured during the day.

To say it was “too low to be a meteor bouncing off the atmosphere” is not supportable because depending on where you are on the spherical Earth such meteors can and do appear to be going at any angle of elevation when viewed from the Earth. And somewhere in the direction of such a meteor that is low in local elevation like this, it is indeed going over someone’s head at that local location. Similarly, moving farther away from the viewing location in the opposite direction will make it appear lower to that local horizon. Interestingly at some point in a perfectly clear sky it could appear to be skirting the horizon if you could actually see it through the haze etc.

We have a couple more emails out to experts, so we will see if they concur with Marc’s findings. Let us know if you agree below.