Home / Articles / Response to Hawking on alien agenda
...something in the world is changing and is forcing some authoritative luminaries of our scientific firmament to pay closer attention to that scenario which they still do not want to depict as anything more than a valid hypothesis.

Response to Hawking on alien agenda

Is the only thing to be feared fear itself?

“…In any event, it is more plausible that the United States (would) be invaded, rather than by troops from the Axis, by the denizens, not well known, but it seems rather warlike, of the planet Mars, who shall come down from sidereal space on unimaginable flying fortresses”.

“I can assure you that flying saucers, given that they exist, are not constructed by any power on this Earth”

“You now face a new world…We speak in strange terms: of harnessing the cosmic energy…of ultimate conflict between a united human race and the sinister forces of some other planetary galaxy”.

– General Douglas MacArthur, Address to the US Military Academy, West Point, May 12th 1962 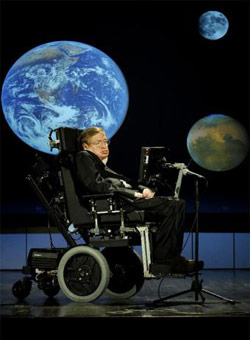 The intense debate triggered by Professor Stephen Hawking’s warning against the dangers he predicts in the event of mankind coming into contact with advanced Extraterrestrial life forms reveals that such an event is now accepted by many  as more than a remote theoretical possibility.

Scientists of Hawking’s eminence have, with rare exceptions, tended to dismiss the mere suggestion that life forms equal or superior to our species could visit us – or be found within the radius of space that is accessible to our space missions – as a fantasy only acceptable in science fiction. Yet, something in the world is changing and is forcing some authoritative luminaries of our scientific firmament to pay closer attention to that scenario which they still do not want to depict as anything more than a valid hypothesis.

In negotiations regarding matters of sensitive military technology, hypothesis is often resorted to as a diplomatic stratagem to refer to “unacknowledged” or clandestine realities without requiring the other side to admit to their existence. Thus, we could say: “let us assume, for the sake of argument, that you had a secret weapon with such and such capabilities; how could we then handle that threat, if it ever were there, in order to remove suspicions as to your intentions?”.

A similar approach is often adopted in official circles regarding the Extra-terrestrial issue, since it has long gone without saying that “serious, responsible” people don’t believe in UFOs and related subjects and adhere faithfully to the current secular theology which affirms mankind’s supremacy, at least in our solar system if not in this extended neighbourhood of the Milky Way. The establishment has gratefully taken Fermi’s question: “where are they?” as a conclusion: “Thank God, they are nowhere to be seen” and are quite unwilling to move off this metaphysical dime. 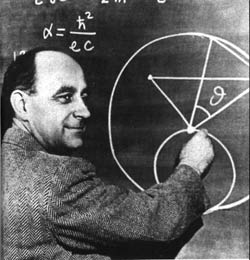 The very use of the verb “believe” in the “ET business” is revealing since it reduces all positive opinions as to the reality of UFOS or other non-human advanced life forms and organizations from “out there” to an issue of religious faith which, by definition, needs no proof or reasoning to be held. Any amount of credible testimonies, documented reports corroborated by multiple witnesses and by trustworthy technical tools such as high definition binoculars, radars, sonars, theodolites, magnetometers, photographs, film and the like is dismissed or ignored with a disdain evocative of Jean-Jacques Rousseau’s superb admonition: “let us ignore the facts, they have nothing to do with the matter”.

Indeed, material evidence that seems to contradict revered scientific theories is treated with the familiar “not-invented-here” stiff upper lip, including the many photographs taken from our space probes that give hints of the existence of artificial structures and crafts on the Moon and on Mars.

It is an understandable but sad feature of the human mind in general that it much prefers the theories and explanations it begets than the unfamiliar and unexplained happenings that often brutally impact its carefully wrought certainties. Thus many scientists are proud to admit that, like doubting Thomas, they don’t believe their eyes or ears, but unlike him, they won’t be convinced either by touching “hard” evidence that does not fit into the models which they trust such Hawking’s theories about the origin and ultimate fate of the universe. These theories are rooted in “gedanken” experiments, ultimately unprovable and probably devoid of practical use but they nonetheless are greeted with the reverence traditionally shown for divine messages while well documented apparitions of UFOs before many witnesses are shunted aside as if they were suspect and irrelevant mind tricks.

Even highly credible and authoritative personalities, such as NASA astronaut Dr, Edgar Mitchell, ex-Defence Minister of Canada Paul Hellyer, Nobel Prize winning scientist Cary Mullis, the wife of the current Japanese Prime Minister or the late Establishment icon Laurance Rockefeller are disregarded when they affirm the evidence of an Extraterrestrial presence and their convictions are automatically downgraded to the familiar level of “belief” as if they has embraced some bizarre minority cult.

More prudent members of the global elite will concede that they are very interested in the UFO issue but will carefully add that they don’t believe that they are “extra-terrestrial”, even when they have no other explanation to account for their existence. Yet, back on January 28th 1920, the Daily Mirror and other newspapers published Guglielmo Marconi’s declarations about the seemingly intelligent radio messages that were being received from outer space in various locations simultaneously, including New York and London. They reported that he thought those messages might have come from civilizations living on other planets. However, the official “scientific” verdict today is that no “artificial” signal has ever been picked up from outside our planet. 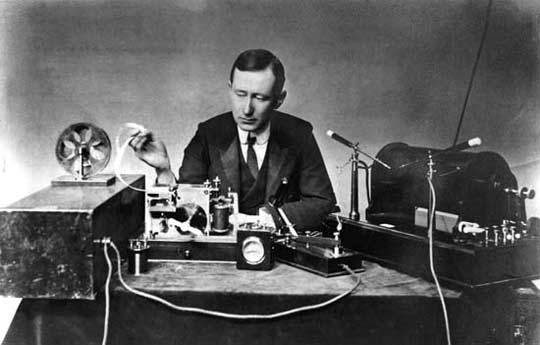 Guglielmo Marconi with his equipment.

Against such an attitude which raises skepticism to the degree of negationism, the kind of proof that students of ufology and exopolitics have garnered for well over a century is insufficient since, even the most irrefutable records are held at bay as being at best unexplained anomalies that might be accounted for one day through some unfathomed conspiracy theory. The shoe is then on the other foot because the much-decried “Exopoliticians”  admit that there is a meta-human, extra or supra-terrestrial intelligence agency at work and are willing to take the facts at face value while the orthodox scientists tend to take refuge in a paranoid suspicion that some government-inspired plot  might manifest the “Deus ex machina” of flying saucers and other UFOs and even use midgets or computer-generated special effects to lead naïve citizens into extraterrestrial superstitions, probably so as to better control them.

Yet, that attempt to discount the hard and multiple UFO evidence is unsatisfying to exacting scientists of Hawking’s level and they, sooner or later, must confront the facts, however intellectually uncomfortable those may appear. The next stage is then to admit that there may well be ETs somewhere but with the caveat that mankind should try to stay clear of them because they could be very dangerous for our collective freedom or even our survival. This is precisely what Hawking does. On the face of it, his warning is logically compelling. However, the obviousness of his conclusions makes them almost inane because if ETs are so much more powerful than us and can somehow get here, then our attempt to stay away or ignore them would be futile as the outcome of this contact would not depend on us. On the other hand, if we discover a new living species that lies below our level of evolution, then it is unlikely we would stay away either, given that we have not done so with any of the millions of plants and animals that populate our own planet.

Inevitably Hawking has to use the language of speculative hypothesis in order to allude to some of the hard evidence that has been gathered for so many years. He specifically says: “I imagine (is that a euphemism for “I am aware”?) they (ETs) might exist in massive ships, having used up all the resources for their home planet, such advanced aliens  would perhaps have become nomads, looking to conquer and colonize whatever planets they can reach”.

As astrophysicist Neil Degrasse Tyson pointed out in an interview with Dr. Sanjay Gupta on CNN on 27th of April 2010, Hawking’s depiction of the methods and motivations of the Aliens, based on the many observations of “massive ships” reflects the fear they may think and act as most humans have tended to through history and also the suspicion that they have already done to their original planets the fatal damage that we are inflicting on our own. What part is certain knowledge and what part is speculation? The parallel with Columbus and the Conquistadors and colonizers of the last five centuries comes to mind but let us not forget that there is an alternative philosophy. As against the predatory politics of “dog eats dog” that contemporary social theories generally regard as a fundamental instinct, the spiritual and social systems of India and other ancient lands have proclaimed for millennia that human upliftment is only possible through the shedding of the fear that makes us confuse a rope with a snake, according to the well known aphorism of the Upanishads. 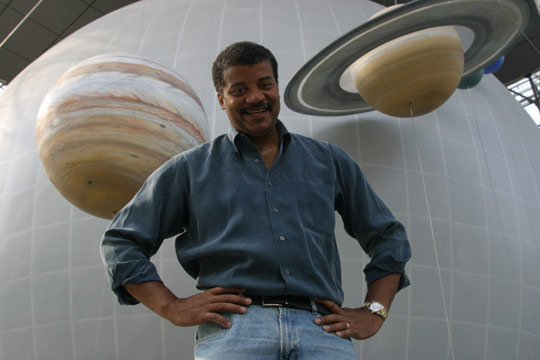 The fear of the unknown makes us want to close our door and at the same time prepare to fight and kill whatever it is that may come from the mysterious outside. Aggression is thereby nurtured and turns against all those whom we perceive as different; in return it generates as a mirror image aggression from the other. Given the fact that the manifested Alien presence has not hitherto harmed us in any visible way and has not attempted to conquer us, should we not shed the fear and open our minds, eyes and arms to the undivided, unified universal field and all its denizens?

COME CARPENTIER DE GOURDON is currently the Convener of the Editorial Board of the WORLD AFFAIRS JOURNAL, a quarterly publication dedicated to international issues, sponsored by the Kapur Surya Foundation (a co-sponsor of the “World Public Forum for Dialogue of Civilisations”) New Delhi, India. For more information about Come, visit: www.ComeCarpentier.com. He shares his time between India, France, Italy and Switzerland. He has lived and traveled in more than fifty countries on four continents. He is also a consultant to Indfos Industries Ltd, a company founded and chaired by the well known Indian philosopher, futurologist and engineer J.C. Kapur, and continues to provide consulting services to various other companies in India and Europe.