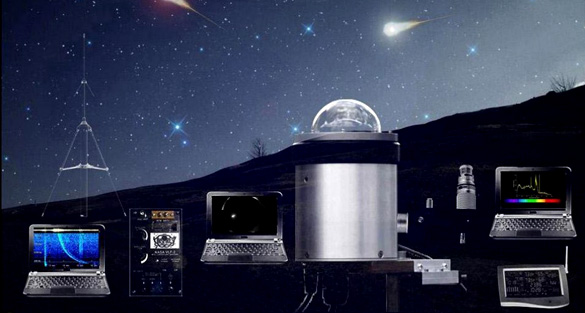 A group of scientists and other professionals have launched a project called UFODATA in which they hope to capture not just pictures or videos of UFOs, but also other scientific data that can help them further understand the UFO phenomenon.

According to the UFODATA website, the group is looking for “a way forward in UFO science.” The site states: “Our own view is that humanity knows very little about the true nature of unexplained UFO reports, and that the only way to resolve this lack of understanding is through serious scientific study.”

One of the founding members of the group is Dr. Mark Rodeghier. He has decades of experience examining the UFO phenomenon. Since 1986, he has been the senior scientific director and president of the Center for UFO Studies (CUFOS), which was founded by Dr. J. Allen Hynek, an astronomer who served as a consultant for the U.S. Air Force during their official investigations into the phenomenon from 1951 to 1969.

“I appreciate UFO history,” Rodeghier told Billy Cox of the Sarasota Herald-Tribune, “but all that history is not going to solve the UFO mystery, and the next 10,000 sighting reports aren’t, either.”

Rodeghier says looking over old files, or even collecting new ones, will not help UFO research make it to the next level.

“It’s abundantly clear that we’re not going to make progress in understanding whatever is causing the unknown UFO reports and sightings without getting the type of data we want to collect,” Rodeghier told Mother Jones. “More witness testimony, where they fill out a form and tell you what they saw, is not going to help us solve the problem.”

Another member of the board of UFODATA is journalist Leslie Kean, the author of the New York Times Best Selling book UFOs: Generals, Pilots and Government Officials Go On the Record. She announced the UFODATA project and the launch of their website in a blog for The Huffington Post on October 14, 2015.

She wrote: “UFODATA has no interest in alleged government conspiracies or adding more witness reports or FOIA documents to the thousands already on file. The idea here is that only a complete change of methodology toward a purely scientific approach to the UFO issue will enable us to move forward.”

And according to the UFODATA website, “This is now possible for the first time in the history of UFO research as a result of an unprecedented convergence of high resolution digital camera technologies, off-the shelf scientific instrumentation, powerful low-cost computing platforms, and ubiquitous high-speed internet access.”

UFODATA’s plan includes creating a network of UFO surveillance stations that can scan the sky and record physical as well as environmental data. They plan to use an “all-sky” camera at each station that can observe the entire sky at once. They will also include several high resolution DSLR cameras that can be activated when needed to record high quality images and video of anomalous objects.

The stations will also include instruments that can record various radio waves, radiation, magnetic fields, a wide range of sound frequencies, gravitational fields, and more. Each station will also be equipped with a weather station to record air temperature, wind speed, clouds, and other atmospheric conditions. 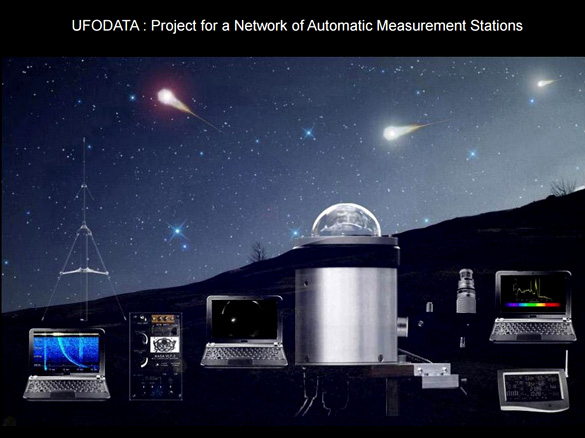 Image of some of the equipment that will be included in the UFO stations. (Credit: UFODATA Project)

The website says, “alarm triggers will initiate recording by all the equipment, permitting capture of a broad range of physical data that can then be analyzed by experts.”

UFODATA currently has an impressive list of experts, including scientists, astronomers and engineers, among others, from all over the world. One of the board members is Philippe Ailleris, a Project Controller at the Space Research and Technology Centre of the European Space Agency.

A couple of other consultants have experience with a similar project in Norway. Engineer Erling Strand and Dr. Massimo Teorani, an astrophysicist from North Italy who is a researcher at the Naples Observatory and at the INAF Medicina Radio telescopes, both have experience researching the Hessdalen light phenomenon.

The Hessdalen lights are mysterious balls of lights that are observed over the Hessdalen Valley in Norway. They have been investigated by universities and scientists for decades, and have even been caught on camera using a similar tracking station that is being proposed by the UFODATA project.

As one might guess, the equipment for such a project will be expensive to fund. With the announcement of UFODATA, also comes a request for funding. The group plans to use crowd funding down the line. However, they wish to build a prototype station before going to the public.

The website says, “to finance potentially large projects like this scientists usually look to official grants. However, it is impossible for us to pursue this funding model because both governmental and scientific authorities observe a ‘taboo’ on the whole subject.”

In fact, the “taboo,” they say, is also effecting their volunteers. Several of their advisers, listed on the site as professors, an attorney and an astronomer, are under the category of “silent partners,” because they have chosen to keep their involvement private due to “the cultural stigma attached to UFOs.”

UFODATA believes the way to gain funding, regardless of the taboo, is to “come from the bottom-up rather than the top-down.”

They write, “our strategy will be to rely on crowd-funding, small donations from the thousands – even millions – of you out there who, like us, think that UFOs deserve serious scientific scrutiny.”

This not the first idea of this sort. Another, similar, project is called UFOTOG, and was the brain child of  famous Hollywood special effects artist and movie producer, Doug Trumbull. He has partnered up with the Mutual UFO Network‘s UFO photo expert, Marc D’Antonio.

They also plan to build a UFO observation unit that includes a suite of equipment. Their project has been in the work for years, and they are inching ever closer to a finished protytpe. They also are seeking funding, but are not taking the crowd-funding route.

D’Antonio told Cox, “Doug and I want certain people to fund it outright, because when you crowd-fund, you’re answerable to everybody.”

D’Antonio says he and Trumbull are open to a collaboration with UFODATA. However, even with collaboration, both groups still need funding.

They all would like the kind of funding boost that was recently received by scientists working on Search for Extraterrestrial Intelligence (SETI) projects. These projects entail listening for radio signals from distance stars to try and pick up on extraterrestrial signals.

SETI recently received a pledge for $100 million dollars over the next ten years from Russian billionaire Yuri Milner.

UFODATA only needs a small fraction of that amount to get their project off the ground, and Kean feels that UFODATA has the potential to see results much sooner than SETI.

“It’s hard to say how long that will take, but it should be a lot shorter than the decades that SETI has been waiting for a signal from far away,” she told Cox.

“With SETI, nobody’s a volunteer – they’re all getting paid,” Rodeghier told Cox. “If we could get a fraction of that, one percent of $100 million, we would be set for years and we could do a bangup job.”

Kean’s connections to the mainstream media, and the impressive makeup of the team, has helped UFODATA garner some conventional media attention. Perhaps this attention will help them find contributors with an interests in the UFO mystery that have deep pockets. Or even better, a call from Milner.