Gliese 581g named best place for alien life, if the planet even exists 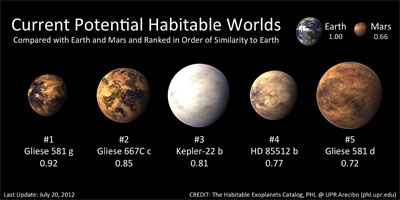 The discovery of Gliese 581g made headlines around the world in September 2010, because the planet was said to orbit in the middle of its star’s “habitable zone” — that just-right range of distances where liquid water, and perhaps life as we know it, could exist. Just a few weeks later, however, another prominent research team began casting doubt on the find, saying the alien planet didn’t show up in their observations.

These scientists from the HARPS Team from the Geneva Observatory were not able to detect Gliese 581g using their own data. And the PHL points out that “further analysis by others scientists also questioned the existence of Gliese 581g in the last two years.”

But new research by the original discoverers of Gliese 581g, led by Steven S. Vogt of UC Santa Cruz, provides an extended dataset, further supporting the planet’s existence. Space.com reports that, according to Vogt, his team could only reproduce the Swiss researchers’ results by “tossing out a handful of data points.”

Despite the conflicting studies, and the challenges to the team’s research, Vogt feels confident that his team’s new data proves the existence of Gliese 581g. And based on this data, the PHL believes this planet is the best candidate for hosting extraterrestrial life.

The team’s new research is published in the journal Astronomical Notes.