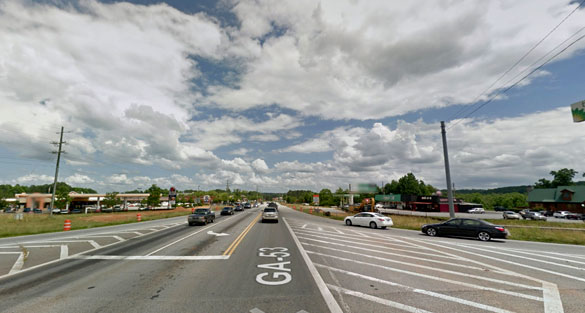 A Georgia witness at Dawsonville recalled a UFO encounter from February 2000 involving a triangle-shaped craft that made no sound, according to testimony in Case 73453 from the Mutual UFO Network (MUFON) witness reporting database. 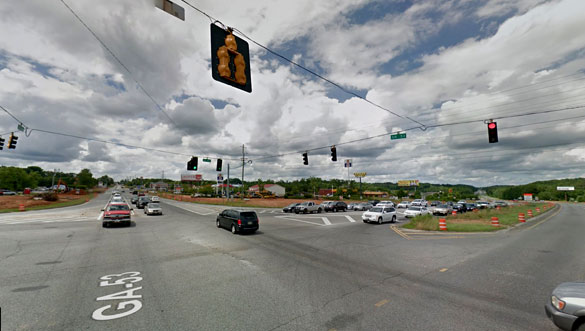 The triangle-shaped UFO moved over the witness who was then able to get a good description of the object. Pictured: The routes 53 and 400 intersection where part of the sighting occurred in Dawsonville, GA. (Credit: Google)

The reporting witness and a friend were traveling home on February 16, 2000, southbound along Highway 400 when they noticed a blue-green light in the distance.

“We continually watched the light because of the color,” the witness stated.“As we got near the outlet mall, the light became four distinct bluish-green lights in a horizontal line. I thought it was a communication tower because it did not move.”

But as the witness approached Highway 53 where it crossed Highway 400, he could see that the lights were too high to be a communication tower.

“I then got excited because I thought it might be a blimp. After about another two to three miles, we saw the object off to the right. It was not four lights, but two sets of four lights that formed a ‘V’ shape.” 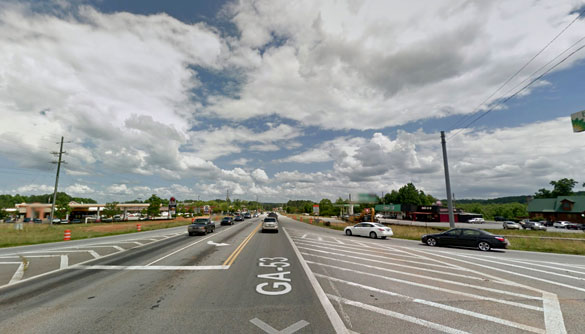 The object was a dark color with a smooth surface. Pictured: The routes 53 and 400 intersection where part of the sighting occurred in Dawsonville, GA. (Credit: Google)

The witness then pulled off the highway at a clearing.

“We watched the triangular object for about one or two minutes and then it rotated about 90-degrees and moved towards us. As it moved over us we could see every detail of the object. It was a dark black or gray metallic object. It had a smooth surface on the bottom with a reddish pipe-like tube around the bottom. There was a round portal-like thing in the center like on a submarine. On two sides there were chambers like a large ship has. I could see depth, but I could not determine how thick the object was.”

“This event took around five minutes from the time it rotated and started moving.

“Two days later I noticed a blister-like bump on the end of my nose that bled when I washed my face. I didn’t think much about it until the friend that was with me said the same thing happened to him. This scared me because I thought of radiation poisoning. A few days later the blister was gone. I have no doubt that what I saw was not from this Earth. It would take antigravity to hover something that large that made no noise or had not wings or rockets. Recently the other person that was with me passed away. I will go to my grave believing that what I saw was a UFO.”

MUFON SAT Group Director Chase Kloetzke reviewed the case as closed it as Information Only. 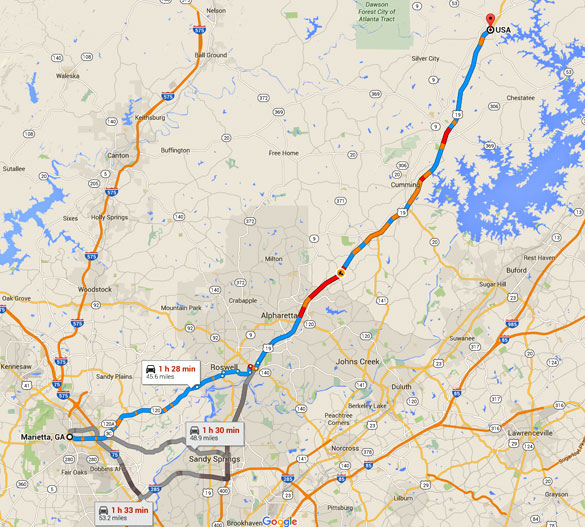 Dawsonville is a city in Dawson County, GA, population 2,536. Please remember that most UFO sightings can be explained as something natural or man-made. The above quotes were edited for clarity. Please report UFO activity to MUFON.com.