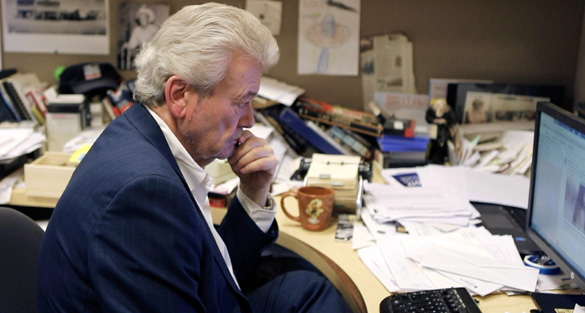 Open Minds UFO Radio: George Knapp is an award-winning investigative journalist and is currently Las Vegas Now’s I-Team Chief Reporter. His reporting has made the mysterious Area 51 famous and has uncovered the most extensive scientific study of a paranormal hotspot. He also is an occasional host of Coast to Coast AM. As a UFO show, those are the accolades that likely interest the OpenMinds.tv audience most. However, beyond the paranormal Knapp’s reporting has resulted in two dozen regional Emmys, five regional and two national Edward R. Murrow awards, nine Associated Press Mark Twain Awards for best news writing and a couple of Peabody Awards, among others. In 1990, he won a United Press International award for his UFO reporting. Little did they know just how influential this work would become. 1989 was the year George began reporting on the alleged back-engineering of alien spacecraft at Area 51 by Bob Lazar. This series made the Area 51 base famous worldwide while remaining the most secretive at the same time.

In this interview, we discuss more recent revelations by George and the Las Vegas Now I-Team. In 2005, George co-authored the book Hunt for the Skinwalker: Science Confronts the Unexplained at a Remote Ranch in Utah. His co-author was Colm Kelleher, the lead scientists in the investigation discussed in the book. Before writing the book, George had hoped to create a documentary, but those plans were halted, until now. A new documentary co-produced with Jeremy Corbell includes footage George held on to for years. In addition to the original footage, George’s reporting has revealed the Pentagon partially funded this scientific investigation. This interview includes never-before-shared details about the nature of the government program and the research behind the Hunt for the Skinwalker.

Get the Hunt for the Skinwalker book on Amazon.

Watch the Hunt for the Skinwalker documentary on Amazon.