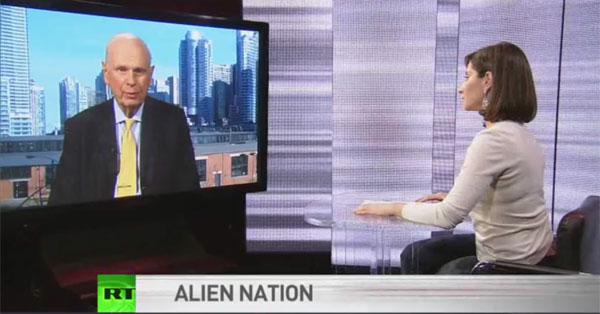 Hellyer is a firm believer that extraterrestrials are visiting Earth in spaceships, and he has spoken publicly about this for years. And on several occasions, he has stated that “UFOs are as real as the airplanes that fly over your head.” 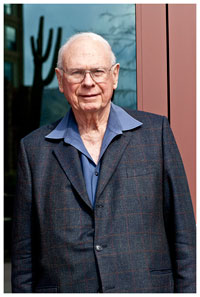 Shevardnadze asks Hellyer, “Why do you say that UFOs are as real as airplanes flying over our heads?” Hellyer responds, “Because I know that they are. As a matter of fact, they’ve been visiting our planet for thousands of years.”

Hellyer claims that UFOs have been downed by military action, and alien technology has been harnessed by Earthlings. He states that,

As far as technology is concerned, they are light years ahead of us, and we have learned a lot of things from them. A lot of the things we use today we got from them, you know – led lights and microchips and Kevlar vests and all sorts things that we got from their technology and we could get a lot more too, especially in the fields of medicine and agriculture if we would go about it peacefully. But, I think, maybe some of our people are more interested in getting the military technology, and I think that’s wrong-headed, and that’s one of the things that we are going to have to change, because we’re going to have to work together, all of us, everywhere on the planet.

Shevardnadze asks Hellyer if shooting down these UFOs is risking an interstellar war, and, if so, “should we be creating a Star Wars force to defend ourselves from possible invasion or something like that?” Hellyer responds, “I think it’s a possibility, but it’s a possibility especially if we shoot down every UFO that comes into our airspace without asking who they are and what they want. Right from the beginning we started scrambling planes, trying to shoot them down, but their technology was superior enough that we weren’t able to get away with it, certainly not for a long while. During that period of time they could have taken us over without any trouble if they wanted to, so I think, rather than developing our own Star Wars to protect ourselves against them, we should work with the benign species that are of a vast majority and work together, and rely largely on them, of course, and cooperate, so that we would be contributing something at the same time; I don’t think there’s any point in us developing a galactic force that would tempt us to ride on our own and get into mischief, which is one of the things that some of them are concerned about.” 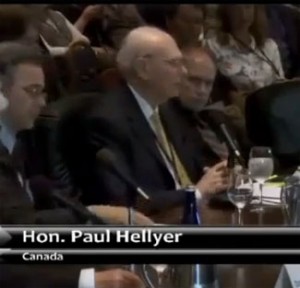 Hellyer was one of several witnesses who testified at the Citizen Hearing on Disclosure in Washington, DC that took place in May, 2013. As part of his testimony, Hellyer stated that “aliens are living among us and that it is likely at least two of them are working with the U.S. government.” More specifically, Hellyer announced that at least four species of extraterrestrials have been visiting Earth for thousands of years.

Paul Hellyer also spoke at the 2011 International UFO Congress. You can watch his entire presentation below.

You can also watch Hellyer’s SophieCo appearance over at RT.