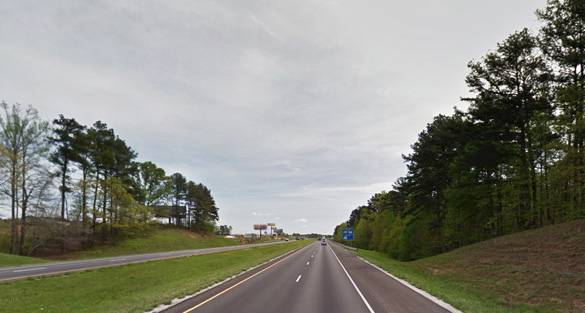 An Alabama witness eastbound along I-20 nearing the 205 exit reported stopping her vehicle to watch a silent, triangle-shaped UFO “as large as a football field” moving slowly at the tree top level that terrified her and appeared to cause missing time, according to May 29, 2014, testimony in Case 56669 from the Mutual UFO Network (MUFON) witness reporting database.

The incident began sometime between 2 and 3 a.m. on January 20, 2014, as the witness was on I-20 heading toward Georgia with an 18-wheeler about a mile or two behind her. 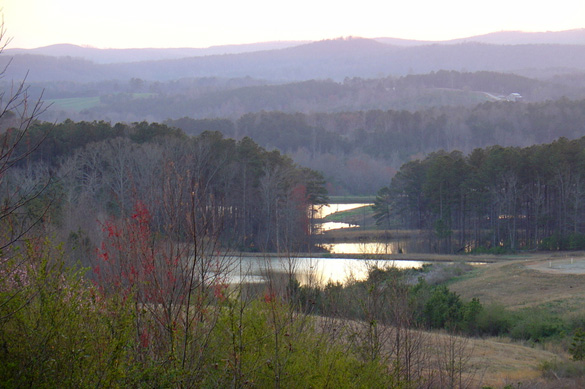 “About a mile to a mile and-a-half before I reached the 205 exit between Heflin and Ranburne, Alabama, I topped the hill and far in the distance on my right side I saw the most extreme, bright, white lights lighting up the entire side of the road and pasture,” the witness stated. “I was very confused as to what I was looking at.”

The witness first thought she was looking at a police search team possibly responding to a traffic accident.

“But then I realized that I didn’t see any emergency police or fire department colored lights and it was extremely quiet. I began to slow my speed as I approached closer and then I noticed the lights that were shinning straight through the tree line onto the interstate had not only risen to above the tree line, but had also turned from pointing toward the road to pointing toward the ground.”

The witness then completely stopped her vehicle along the interstate, but checked out the roadway for her safety.

“I looked in the rear-view mirror to see where the 18-wheeler truck was in relationship to my car because I wanted to make sure that I was wasn’t going to get hit and also I wanted to make sure that I wasn’t the only person who was seeing this. The 18-wheeler had also come to a stop about one mile behind me and had his cab door open and he also had not pulled off the interstate.”

The witness then turned her attention back to the lights and noticed that they were at the tree top level and the lights were pointing toward the ground.

“The next thing I knew it was completely dark. I then was very confused and began looking about the sky for anything that could have done this.”

The witness then realized that the lights were attached to a very large, triangle-shaped object.

“Still very confused and extremely scarred, I noticed a huge, huge, triangular-shaped object that had rounded edges where the point of a triangle would be. There was no sound at all and no lights on this object were seen now. This object remained about tree top tall as it passed over my car heading northwest.”

The silent object was very large.

“This object was as large as a football field if not larger. And was about 50 to 60 feet thick. I could clearly see the pattern on the bottom and the sides of this object.” 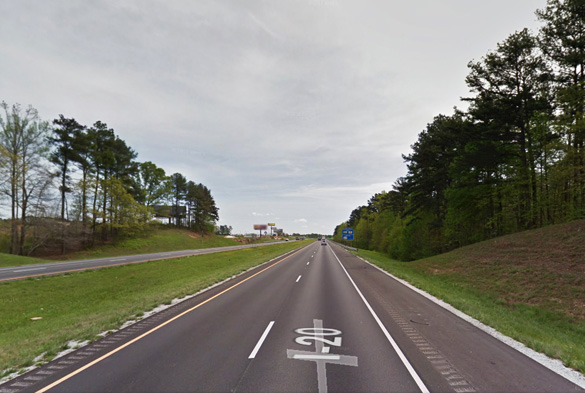 The witness was near this location traveling eastbound along Alabama’s I-20 nearing the 205 exit when she first saw the triangle-shaped object hovering at the tree top level on January 20, 2014. (Credit: Google Maps)

The witness became terrified of her position at this point and looked again for the 18-wheeler.

“I sat at a full stop in the middle of the interstate feeling completely terrified and violated and again looked behind me to check and see if there was any other traffic that the was going to hit me. The truck was nowhere to be seen and he was only about one mile behind me and was stopped with his door open only moments before. He couldn’t have made an exit off the interstate because the 205 exit in front of me was the only exit off the interstate for a few miles. This left me dazed and confused.”

The witness then realized she had experienced missing time.

“I realized that I had time missing from when I saw the object in the field about tree top tall with its lights on and when it was coming over my car without any lights on. When I finally pulled myself back together and began to drive slowly home I realized that the time was now 4:12 a.m.”

The witness described herself as a professional with no problems that would account for the incident.

“I am 47 years old and I am an RN with almost 30 years experience working as a nurse in the ER, ICU, and Dialysis.”