Home / Articles / Foo Fighters: Strangers in the sky
Long before the famous UFO sighting of Kenneth Arnold on June 24, 1947 allied bomber pilots reported seeing strange “balls of light” over Europe and the Pacific Theater of Operations during World War II.

Foo Fighters: Strangers in the sky

Long before the famous UFO sighting of Kenneth Arnold on June 24, 1947 allied bomber pilots reported seeing strange “balls of light” over Europe and the Pacific Theater of Operations during World War II. Many of these reports originated during the bombing of German ball bearing plants and oil refineries. The strange lights were seen flying in formation around American B-17 and B-29 bombers. Sometimes, the reports would be of a single object, but generally they appeared in groups of two or more.  During the daytime, these unknown craft resembled metallic globes. At night, they glowed brilliantly with colors that included blue, green, orange and red. Were the famous “Foo Fighters” of WWII a secret weapon developed by the Third Reich, or were they of extraterrestrial origin? 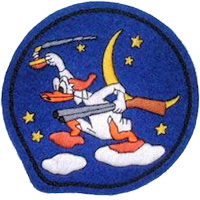 The first officially recognized sightings of “Foo Fighters” occurred in early October of 1944 by pilots of the 415th Night Fighter Squadron while flying over Belgium, Holland and West Germany. The squadron was made up of the following aircraft: The A-20 Havoc, P-70 Havoc, Bristol Beaufighter, and the P-61 Black Widow. In many cases, pilots reported that the strange craft flew just off their wingtips, and that they could not be outmaneuvered or shot down. However, in one case which took place in the Pacific Theater of Operations, the gunner of a B-29 was successful in hitting one of the elusive craft with gunfire, causing it to break up into several pieces. In another documented case dated November 27, 1944 (reference Man-made UFO’s) two pilots encountered an enormous burning orange light over Speyer. It was flying at a speed of approximately 250 mph, and at an altitude of 1,500 feet above their aircraft. Shortly thereafter, the plane’s onboard radar began to malfunction.

On December 13, 1944 Reuters ran a brief article which indicated the Germans have produced a secret weapon in keeping with the Christmas season. The article went on to relate that this new device resembled the huge glass balls that adorn Christmas trees. One day later the New York Times ran the following headline: “Floating mystery ball is new Nazi air weapon”. Taken together, these two articles represent the beginning of modern day UFO reports. Soon after, newspapers around the country ran similar headlines: “Mystery flares tag along with U.S. Night Pilots” (Chicago Tribune), “Mysterious Foo Fighters, Balls of Fire, Trail U.S. Night Fighters” (St. Louis Post Dispatch). For decades, researchers and historians tried in vain to obtain any additional information on these elusive devices from official government sources. Despite multiple FOIA (Freedom Of Information Act) requests, a “no records” response was always the result until the late 1990’s.

Decades earlier in 1968, Italian author Reneto Vesco published his ground breaking book “Intercept UFO” where he provided detailed information that indicated that the mysterious Foo Fighters were in point of fact radio controlled missiles which were built in Austria under the direction of the SS technical division. They were known in Germany as “Feuerballs”, and construction is believed to have taken place at a facility known as the “Rax Works”. With the advancement of the Soviets into Austria, manufacturing facilities for the Foo Fighters were moved to various underground plants in the Black Forest. Vesco went on to state that they were armored, and circular in shape. Propulsion was provided by a specially configured flat circular turbojet engine. It also included an onboard infrared tracking device which was activated once it got within range of its target. In addition, Vesco stated that a special chemical additive was mixed in with the fuel which caused the surrounding air to become ionized. In this ionized state, electricity could be conducted directly through the air, causing the engines on allied bombers misfire or stop running completely. It could also be used a “psychological” weapon intended to confuse and distract bomber crews. 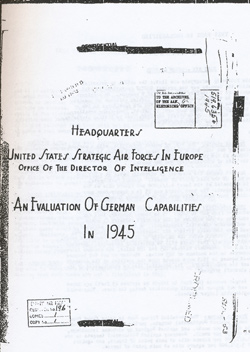 In a bombshell discovery made by researcher Friedrich Georg (reproduced above from Henry Steven’s book Hitler’s Flying Saucers), the true identity of the Foo Fighters was finally revealed. In an obscure microfilm roll which was apparently missed by sensors, the following title was identified: United States Strategic Air Forces in Europe…..An Evaluation of German Capabilities in 1945. The document clearly stated that the so called “Foo Fighters” were actually given the official designation of “Phoo Bombs”. It further stated that the device was radio controlled, jet powered, with a short range. It could also be used as a ramming weapon with a speed of up to 525 mph. They were launched from local airfields, and could be remotely controlled to their targets from the ground or aircraft. Therefore, according to this official “Rosetta Stone”, the United States government knew since 1945 what the “Foo Fighters” were, and who was responsible for their construction. The findings in the Strategic Air Forces document vindicated Vesco’s research which had essentially reached the same conclusions.

What happened to the mysterious Foo Fighters after the war? Records recovered after the war and stored at the National Archives indicate that literally hundreds of boxcars full of technical documents, drawings, blueprints, and engineering manuals were recovered by the allies and shipped back to the United States. Is it possible that a few remaining Foo Fighter prototypes were recovered by the United States Army as well? On July 8, 1947 the Arizona Republic ran an article indicating that two silvery balls were seen across the Salt River Valley north of Phoenix. The strange objects were observed by multiple eyewitnesses. The craft were travelling from west to east at great speed. They initially flew at different altitudes, until the lower craft climbed abruptly to match the height of the other. What secret technology did America acquire immediately after the war? What hidden technological wonders remain locked in huge government warehouses at remote military installations? Although the elusive Foo Fighters have now been official exposed within government documents, they remain physically hidden to the public until the doors of a future American museum are opened finally revealing their true identity.

Exceprt on "Phoo" Bombs from the USAF document.