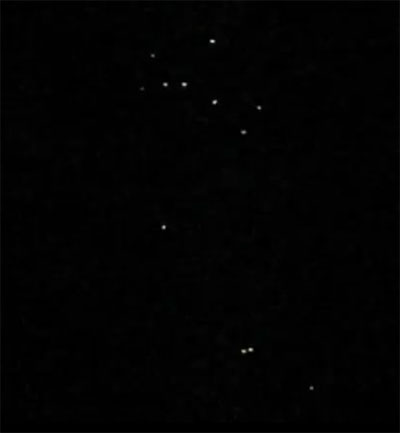 An interesting video was recently brought to my attention by my good friend and Huffington Post journalist Lee Speigel. The video, recorded by a tourist from Ohio, shows a mass of small orb UFOs above Las Vegas on the night of Wednesday March 21. Coincidentally, Speigel and I were in Las Vegas on the night of March 21. Had we been outside, rather than enjoying the buffet at the Monte Carlo Resort and Casino, we might have witnessed the UFO event firsthand.

The video shows approximately 7.5 minutes of mysterious illuminated orbs swirling in, and around, the Luxor Sky Beam above the Luxor Las Vegas. The Las Vegas Sun describes, “Several bright spots of light can be seen rotating in a fixed pattern high above the Strip near the Luxor’s famous beam of light.”

The exact time of the event is unknown. However, a hint is given in the video when the witnesses remark about how they are close to being late to a performance by comedian George Wallace, who performs at the Flamingo Showroom. According to the Flamingo website, Wallace performs at 10:00 PM. Therefore, the sighting likely took place just prior to 10:00 PM.

The witness uploaded his video to his YouTube channel–UFOzAreVeryREAL. The Las Vegas video is currently the only video on this channel that was seemingly created to showcase this video. In the description that accompanies this video, the witness stated, “The event I captured in this video changed my life forever.”

But not everyone is convinced that the objects in the video merit such awe. Some suggest the objects in the video are simply bats flying around, and into, the bright beam of light. A YouTube user named ghechy69 commented, “Dude . . . I work at Mandalay﻿ Bay which is right next door to the Luxor . . . They are bats and birds that eat the bugs that are attracted to the bright light of the beam coming from the Luxor . . . [It] happens almost every night in the spring and summer and I have seen it ever since the light has been on . . . It is not a ufo!!!”

The Las Vegas Sun reports that two other videos posted by separate people were uploaded to YouTube on March 22, possibly showing the same event, but from different angles.

The objects in the video are only visible when illuminated by the powerful light beam from the Luxor. This, paired with the gliding motion of the objects, makes the bat/bird theory plausible. But with the limited detail provided by the video evidence, a positive identification cannot be made.

What do you think about these mysterious orbs above Las Vegas? Are they something extraterrestrial in origin, or perhaps just bats feasting on the buffet of bugs in, and around, the bright Luxor Sky Beam? Share your thoughts with us on the Open Minds Facebook page.